Home Aerospace Test Success for Battlefield of the Future 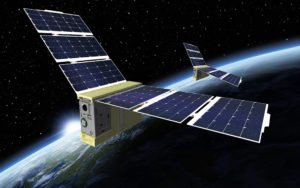 Huntsville-based space and defense contractor Dynetics just completed a successful test of two small satellite payloads that promise to be key components of what the U.S. Army describes as the battlefield of the future.

The “smallsats” themselves look no more promising than computer consoles with solar flaps, but they promise to be telecommunications platforms that can command battalions of ground troops down to tactical details.

Dynetics, which this month hosted a visit by the U.S. Secretary of Defense, is involved in two of three smallsat programs by the Army — Gunsmoke, Lonestar and Polaris. All three are built on the Kestrel Eye, an imaging microsatellite that the Army demonstrated in 2017 and 2018. Dynetics most recent smallsat tests were for the Lonestar program, and it is also contracted for work in the Gunsmoke program. They all are aimed at managing the battlefield from low orbiting satellites.

All three programs will use “robust PNT [Precision Navigation & Timing] in Low Earth Orbit [LEO],” said the outgoing chief of Army Space & Missile Defense Command, Lt. Gen. James Dickinson, in August 2019 at the Space and Missile Defense Symposium. Dickinson, who left his post at Redstone Arsenal in Huntsville to take over as deputy commander of the joint Space Command, said the system must be “designed to be directly taskable and responsive down to the tactical level.”

Now that Dynetics has completed testing of the payloads for the two Lonestar satellites, it goes on to the rest of the contract — developing, testing, integrating and demonstrating two tactical space support vehicles (TSSV) that will be used to enhance all phases of joint force operations.

Founded in Huntsville in 1974, Dynetics, formerly an ESOP, was bought in January by Leidos, a Fortune 500® information technology, engineering and science solutions company.