The milestone event came less than a dozen years after workers made the first HMMA engine, a six-cylinder, in 2005, the year of the 1, 744-acre plant’s grand opening. The Montgomery factory became Hyundai’s first U.S. manufacturing plant that year.

The engine shops run in 10-hour shifts five days a week. Near the end of 2017, the HMMA teams had assembled nearly 660, 000 engines, says Chris Susock, HMMA’s vice president of production. But if it had been necessary, the HMMA plant could have produced more than 700, 000 engines at peak capacity.

Also in 2017, one of HMMA’s auto parts suppliers, Guyoung Tech USA, a Korean company, announced its plans to invest $7.5 million to build a new plant in Montgomery. The move, officials said, would eventually bring some 130 new jobs to the area.

One was a temporary slowdown in its ability to transport its vehicles while CSX railroad put in place a new system to enhance railcar movement across certain regions of the United States.

“This resulted in limited availability of automotive and other dedicated railcars in the Southeast, ” Susock says. “After reviewing the impacts of this change on automotive and other industries, CSX made several adjustments to their railcar allocations in our region. The service has improved significantly.”

Additionally, HMMA slowed down production of the Hyundai Sonata and Elantra sedans last year because of weak sales, Susock says.

Hyundai distributes vehicles through its sales division, Hyundai Motor America, which is based in Fountain Valley, California. Hyundai has more than 830 dealerships nationwide.

Last Nov. 1 in a press statement, Hyundai Motor America reported that the company in October had sold 53, 010 units of its Hyundai and Genesis brand vehicles, a drop from 62, 505 in sales made the previous year in October 2016.

But while the production adjustment is still in effect, he says, the plant is likely to return to its previous production levels by June 2018.

On the other hand, Susock says, Santa Fe sales were on an upswing last year.

“The CUV growth trend for Hyundai continues as customers are able to find the right size, versatility and performance from Tucson and Santa Fe in highly competitive segments, ” Angevine said. “With two months remaining in the year, our focus is on maintaining retail market share and working closely with our dealers for a strong close to 2017.”

Susock says HMMA will continue producing the Sonata, Elantra and Santa Fe Sport. The Santa Fe and Elantra, however, will get new redesigns this year.

“During 2018, the Elantra sedan will receive minor refreshed updates for the 2019 model year, ” says Susock. “The Santa Fe Sport will be completely redesigned and introduced during the spring of 2018. New features on this vehicle will not be available until revealed at an auto show in early 2018. The Sonata will not see any significant changes during 2018 since it had several changes to the exterior and interior of the vehicle in 2017.”

“We are proud of the plant’s successful launch of the updated 2018 model year Sonata, ” says Susock. “Even though the mid-size sedan market has slowed, this model of the Sonata has been well received by car buyers and automotive media.”

The Sonata’s redesign, in fact, won the 2017 Good Design® Award from the Chicago Athenaeum: Museum of Architecture and Design and the European Centre for Architecture Art Design and Urban Studies in December.

All of the Sonata models for 2018 have standard safety features such as Blind Spot Detection with Rear-Cross Traffic Alert.  They also come with Bluetooth hands-free phone systems and Android Auto and Apple CarPlay compatibilities.

Meanwhile, the Elantra sedan comes with a 2.0-liter, four-cylinder engine, projector headlights, power steering, front-wheel drive. It also has a seven-inch display audio system with a high-resolution touchscreen. Among the Elantra’s safety features are a tire-pressure monitoring system, advanced dual-front and side curtain airbags and lower anchors and tethers for child seating.

Susock says HMMA will not confirm its 2019 product business plan until mid-year 2018. In addition, currently there aren’t plans for a plant expansion.

Gail Allyn Short and Cary Norton are freelance contributors to Business Alabama. Both are based in Birmingham. 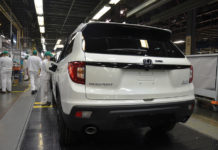 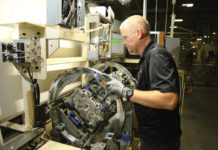 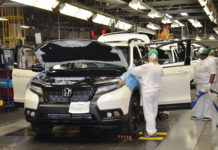