It’s the busy time of the year for the Alabama Gold Camp in Cragford, just southeast of Lineville, on the Clay-Randolph county line.

“We stay busy, ” says Bob Hendrix, who works at the camp. “People come from all over the U.S. We have people who come in April and stay until October.” The camp has two miles of creek for the campers, whom Hendrix says are mainly retirees, to pan for gold, along with a campground, a store and other amenities. Hendrix says gold mining clubs and other groups often meet at the camp.

And, occasionally, someone finds gold. “The biggest piece of gold I’ve seen was about the size of a dime, ” Hendrix says.

Not far away is Goldville, once home to dozens of mines plus 14 stores and 3, 000 residents, and birthplace of Alabama’s 44th governor, John Patterson.

Now the town has 53 residents, but it’s still “on the map” for gold, says Mayor Coy Powell, who also answers to Coye, Coya or even James C.

“I heard some of the old people talking and saying that if you ever see raw gold, it is something that is going to hypnotize you. I remember panning and the first big flake of gold that came shining like a flake of sunshine in the pan sort of took my breath and it was beautiful. Pure gold is so beautiful.”

With gold prices bouncing around $1, 300 an ounce and an uncertain economic environment, could gold mining in Alabama be making a comeback?

“I don’t think so, ” says James Saunders, retired professor emeritus in geology at Auburn University and longtime observer of the gold business in the South. “Other than people can pan a little gold out of several streams in Alabama in some former gold-producing areas. Then there might actually be some little businesses where they charge people to pan, but there is no commercial mining of gold right now.”

“As far as I know, ” says Saunders, “there is only one producing gold mine in the entire South, and it is a major mine in northern South Carolina called Haile Mine. That is a very profitable mine, and one of our students is going to go work up there for a summer job.”

Alabama produced a significant amount of gold when it was discovered in Chilton County in the late 1830s. The state’s gold rush ended in 1849, when most gold miners left the state to join the California Gold Rush. There have been sporadic gold revivals since then, but no large quantity has been produced.

The Alabama goldfields are primarily in a gold belt 60 miles wide and 100 miles long. The gold belt enters the northeastern part of the state coming from the border with Georgia toward an area in central Alabama, known as the Piedmont Uplift.

“Historic production of gold in Alabama was maybe 50, 000 ounces of gold, total. That might be a good week’s production at the Haile Mine, ” Saunders says.

“Many of the rocks that had the gold in them have been weathered over the years, back when the Appalachians formed, maybe 300 million years. That’s a long time for mountains to be subjected to weathering and erosion, so probably a lot of gold that used to be in the rock has been released into the creeks, but that doesn’t mean there is no gold in the rocks.”

And still, the state has some “gold districts, ” a mining phrase that means a section of country in which gold is found in paying quantities and which is worked under rules and regulations prescribed by the claimholders in the district.

These districts were organized by early miners and were one of the few ways to establish and maintain law and order.

Powell says he used to have a lot of people coming to the Goldville District and asking him where to look for gold. “But I put a stop to it. I just told them. There ain’t nobody going to give you permission to get on their property unless you got somebody with you, and I am not going to be with you.”

“I done all my research 40 years ago, ” Powell says, “when I was young and able to walk and this that and the other. You got to walk to get to it. You ain’t gonna drive to it. Course, people around here, if I was to ask for permission, people around here would give me permission. But I don’t lie to ’em. Years ago when I took people who wanted to pan I would tell the landowners what I was getting their permission for and they would say, “Well you’re not going to find nothing and if you do you’re going to tell me.’”

One of the problems with doing mineral exploration in the South, according to Saunders, is property rights.

“If you own the surface rights, then you own the mineral rights and as a mining company you would have to deal with a lot of small property owners as opposed to out West where there is a lot of federal land where they can stake the claim, so that kind of tends to dampen exploration efforts in the South and East, ” Saunders says.

“Back in 1979, ’78, when gold started climbing, ” Powell says, “U.S. Borax mining company, they got interested, you know, this is one spot where if you own the land, you own the mineral rights. They contacted my dad, he was in charge of this property then, and several other landowners, and they wanted to lease the property.”

The landowners agreed and Powell says Borax “sent a young man down all the way from Pennsylvania and he — I call him a rock inspector — was pretty knowledgeable about rock. And my daddy had a well drilled out there and they drilled down through that blue granite.”

Powell says, “The young man looked all over the property at several mines and eventually Borax decided to sign the lease.

“They found out they was gonna have to go down deep to get it. The old miners took it from what I call above the ground, the tops of the rocks. They talked about how they was gonna have to go down about 120-30 feet to get the big stuff, you know. When they found out what was in the lease about strip mining, well, they just they come back in about four years, paid everybody the lease and left.” 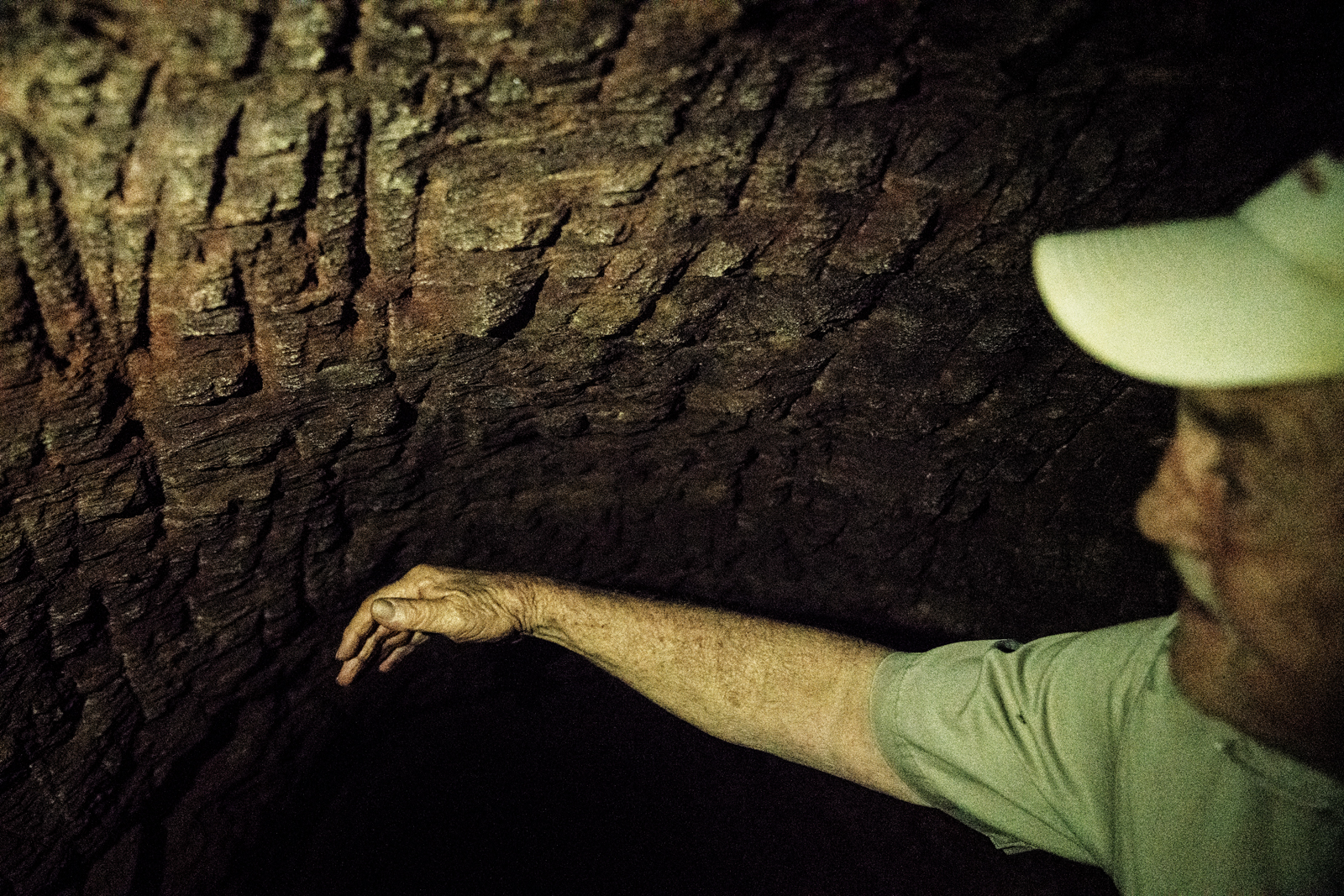 ABOVE Pickax marks made almost two centuries ago are still clear today.

But Alabama still has some “gold districts, ” which begs the question: Could it be possible, given the $1, 300 per ounce of gold price, that there may be enough gold in those Alabama hills to revive gold production? Or could a “mother lode” still be hidden beneath the Alabama rocks?

“There is some exploration going on for some of these resources, and I guess the most advanced one would be where they are actually doing a lot of drilling, and that would be in northern Tallapoosa County, ” says Saunders.

The drilling is being done atop Hog Mountain, a former gold producing mining area dating back to the latter part of the 19th century, that still draws attention when gold is discussed.

Hog Mountain, according to Saunders, was the site of Alabama’s largest gold producing mine ever — “which really wasn’t that big.” Both Saunders and Harold Stowell, professor of geology at the University of Alabama, have visited the Hog Mountain operation and led geology student field trips to the site.

“They drilled a lot of drill holes, and they are doing it right. They are hiring consultants and they are getting assays done, so it is a viable resource, ” Saunders says. “I don’t know how much was really produced, but they did a lot of digging underground there when people didn’t have any jobs. But if there is a potential deposit in Alabama, that’s it. So they are spending money evaluating it.”

“They have drilled 200 drill holes on this property, so it is just a matter of them getting the data, putting it into computer models and having the experts look at all the data and then decide can this be mined for a profit or not, ” says Saunders. “It helps that the Wellborns own all the property so they don’t have to pay any royalties to any third parties.”

The “Wellborns” to whom Saunders refers, is Paul Wellborn, owner of Wellborn Cabinets in Ashland, a 2, 000, 000-square-foot facility that makes cabinets. Wellborn was not available to talk about the Hog Mountain mine.

“This is diamond core drilling, ” says Stowell, “and it is all being done by one person which is the landowner.  He owns the property, and he is maintaining and operating his own drilling operation, which means that he currently owns two drill rigs, and these are diamond core rigs, fairly expensive operations. They have a large, two-and-a-half-inch diameter pipe at one end, which has a bit, and the drill rotates quickly and grinds down through the rock, and they remove a core, which is a cylindrical piece of rock.”

Saunders says, “They have these drill bits that just crush the rock and that is what washes up, and some of the smart paleontologists and geologists can look at the chips and tell what the rocks are.

“The drill goes down to maybe 300 feet, and then they look at the rock and photograph it, they split that core in half, keep half of it for future reference and then send the other half of that core to the assay lab, who breaks it up, digests it and does the determination of how much gold is in it.”

“It is kind of like sticking a straw through a potato.”

So, back to the question of whether there is enough gold left in Alabama to pursue it.

“To my knowledge, no, on production, ” Stowell says.  “If you want to take it a step further and say exploration, I would say yes.”

His Auburn colleague agrees. “In terms of a world-class operation, I would say the likelihood is extremely low, ” says Saunders. “In terms of there being a find large enough for an individual such as Paul Wellborn or any small company, I would say fairly high.”