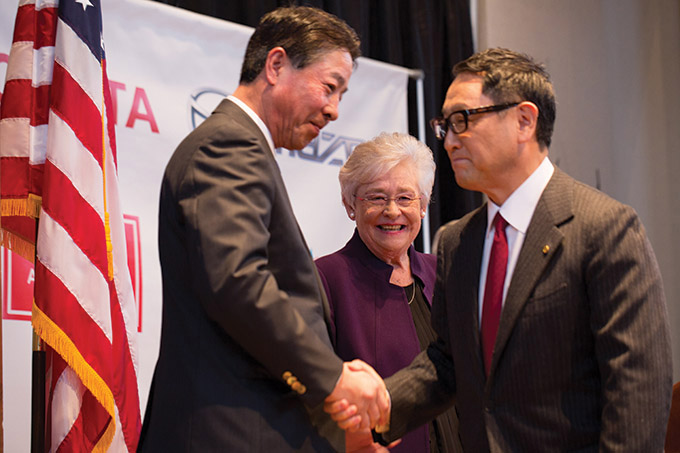 • Alabama’s decade was made Jan. 10 when Toyota President Akio Toyoda and Mazda President Masamichi Kogai announced Huntsville would get their new $1.6 billion, 4,000-job assembly plant. Incentives are estimated at up to $900 million but other states pledged more and got nothing. The plant will make a newly designed Mazda crossover model and the Toyota Corolla by about 2021.

• The state did well when the U.S. Air Force handed out $2.3 billion in contracts for development of a Launch System Prototype for the Evolved Expendable Launch Vehicle program. United Launch Alliance, Northrop Grumman and Blue Origin, all with Alabama operations, got money.

• Mercedes-Benz in October broke ground on its new battery factory, seven miles from its production site in Tuscaloosa. The company has pledged $1 billion toward assembling electric vehicles in Alabama and selling them around the world.

• It’s not as sexy as sleek automobiles but it’s a big suitcase of money: International Paper says it will spend $552.7 million on its Riverdale Mill in Selma to up product mix and productivity.

• The Grand Hotel Golf Resort & Spa, opened in 1847, completed a $35 million renovation in the fall and joined the Autograph Collection Hotels, part of Marriott International. It joins the brand’s portfolio of more than 150 one-of-a-kind hotels. 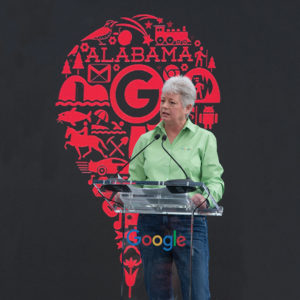 Amazon broke ground on a $325 million distribution center in Birmingham that will employ 1,500 and pay them an average of $14.65 an hour to fill orders alongside robots. Facebook announced a $750 million data center for Huntsville, leading one official to draw comparisons between the Rocket City and the Crimson Tide. Google finally broke ground on its $600 million data center in Bridgeport, which drew a “Roll Tide” from Google scientist and Alabama native Nan Boden. Birmingham attracted DC Blox to near downtown for a technology and innovation campus that officials said could mean $785 million in investments over the next decade. Sierra Artificial Neural Networks will move its headquarters from Nevada to Florence, partnering with IPWatch Systems Corp. Hoar Program Management was charged with building the second Airbus line in Mobile to produce A220 planes. Rex Lumber Co. cut a deal for a $110 million lumber manufacturing facility in Pike County. Evonik of Germany unveiled its global Competence Center for Medical Devices in Birmingham, a $50 million expansion for biomaterials. Montgomery gained an Air Force innovation hub called MGMWERX to devise research and technology for the military. GE Appliances, a Haier company, will do a $115 million expansion of its Decatur Refrigerator Plant, creating 255 new jobs at the 40-year-old factory. Sentar Inc. of Huntsville won a piece of a $949 million technical services contract from the Space and Naval Warfare Center. Philadelphia-based Carpenter Technology Corp. decided to put $52 million into Athens with an Emerging Technology Center to study additive manufacturing. Kimberly-Clark Corp. said it would spend more than $100 million to grow its Mobile paper mill, following a $75 million upgrade last year. The Alabama Futures Fund, a seed-stage investment fund that drew such notables as Charles Barkley, announced it had $25 million in venture capital. 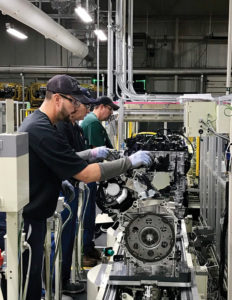 Great in Our Field

Soybean and corn pushed 2017 yields up 11 percent over the previous year, a $100 million increase, and 2018 looked good until Hurricane Michael came calling with a $200 million punch for southeast Alabama. Bayer AG won approval for a $66 billion takeover of Monsanto Co., thus marrying the world’s largest seed and ag-chemical concerns. Limestone County got its first new cotton gin in 60 years, a three-stand, $7.2 million affair that spits out 60 bales an hour. Koch Foods announced an $80 million expansion in Gadsden, with 200 new jobs, making that facility among the largest poultry processing plants in the nation.

Bumps in the Road

Remington filed and emerged from bankruptcy, without much apparent stress to its 500 workers in Huntsville. State linchpins Alabama Power Co. and Regions Bank temporarily left the Business Council of Alabama over leadership issues. The mothballed Bellefonte Nuclear Plant in northeast Alabama had a path to completion in early 2018 but complications arose. German and Japanese automakers were united in expressing frustration over steel and aluminum tariffs imposed by the Trump administration.

United Launch Alliance picked Blue Origin’s BE-4 engine to power its next-generation Vulcan Centaur rocket. Turner Construction Co. topped out Aerojet Rocketdyne’s Advanced Manufacturing Facility in Huntsville, where subcomponents of the AR1 rocket will be made. Bombardier Inc. and Airbus Americas are now partners in the Bombardier C-Series, aka the A220, a $300 million investment to bring 600 new jobs to Mobile. UTC Aerospace Systems in Foley delivered its first two “neo” or “New Engine Option” fuel-efficient engines to Airbus. Stewart Industries International expanded its maintenance support capability in Birmingham at the former Kaiser Aircraft facility, creating at least 200 jobs. Continental Motors in Mobile, which employs 400, is doing a $70 million upgrade of its manufacturing operation.

An ethics trial in Birmingham fouled the atmosphere for much of 2018, involving a scheme to halt expansion of a toxic cleanup site in Jefferson County. Former Alabama state Rep. Oliver Robinson got a 33-month prison sentence for taking bribes to misdirect the EPA, while former Balch & Bingham partner Joel Gilbert got five years in federal prison and David Roberson, former Drummond Co. VP of Government Affairs, got two and a half years. Austria-based Lenzing halted a planned $300 million expansion at its fiber plant in Mobile County, citing trade tensions. Southeastern Grocers, parent company of Winn-Dixie, filed Chapter 11 bankruptcy in March and closed many stores. British defense contractor BAE Systems laid off about 170 workers at its ship repair operations in Mobile. Toys R Us stores across Alabama went dark when the chain said it was going out of business in September. Friedman’s Fine Jewelry in Mobile planned to end its 72-year run. Union Furniture in Tuscaloosa shut its doors after 91 years. MasterBrand Cabinets closed its Auburn plant, laying off 445 people almost overnight. Russell Brands idled 75 workers at its distribution center in Alexander City.

The University of Alabama School of Law received $26.5 million in committed donations from Sarasota County, Florida developer and attorney Hugh F. Culverhouse Jr., meaning it will soon be called the Hugh F. Culverhouse Jr. School of Law. Auburn University showed its commitment to 3D printing by partnering with NASA and industry leaders to create the Additive Manufacturing Center of Excellence at Auburn’s Samuel Ginn College of Engineering. The University of Alabama at Birmingham opened its $37.5 million facility to house the Collat School of Business and Bill L. Harbert Institute for Innovation and Entrepreneurship. Faulkner University opened its new Speech and Language Pathology Clinic, a component of the new College of Health Sciences and the first step toward a comprehensive autism center. The University of Montevallo accepted a $3.6 million gift, the largest in its history, to go toward a new building for its Stephens College of Business.

• Austal USA in Mobile was among five shipbuilders who each got $15 million in Navy contracts to provide conceptual designs for the next generation guided missile frigate. The shipyard also got a visit from U.S. Supreme Court Associate Justice Sonia Sotomayor, who traded her robes for welding gear at a keel-laying ceremony.

Alabama Media Group journalist John Archibald snagged a Pulitzer Prize for commentary that bemoaned crooked and inept politicians, inequality and plain old hypocrisy. Magazine and broadcasting company Meredith bought Time Inc. and laid off 25 people in Birmingham, with the last issue of Cooking Light coming out this month. Gray Television Inc. and Raycom Media Inc. merged to create the third-largest television broadcast group in the United States, serving 92 markets. Author Harper Lee, even beyond the grave, foiled The New York Times by moving her assets to a private trust before her death, making the newspaper’s lawsuit for details on the trust ineffective.

Coastal Alabama Community College President Gary Branch retired after 37 years of leadership at his school and more than 50 years in higher education. Business Council of Alabama President Billy Canary stepped down after a wave of high-profile departures from the organization. Brandt Ayers, chairman of the board of Consolidated Publishing Co. and a voice of Southern liberalism, resigned after at least three women accused him of assault during their time at the Anniston Star. Honda announced it was ditching Asimo, its famous if stumbling bipedal robot.

U.S. District Judge Barbara Jacobs Rothstein ordered Pricewaterhouse- Coopers LLP to pay the Federal Deposit Insurance Corp. more than $625 million for negligence in the audit of Colonial BancGroup Inc., an Alabama bank holding company that failed during the Great Recession. The CUMIS Insurance Society agreed to pay $2.25 million to end a $601 million Alabama One Credit Union civil lawsuit that claimed mismanagement by former executives. Cadence Bancorp said it would move its headquarters from Birmingham to Atlanta after buying State Bank Financial in a deal valued at $1.4 billion.

Alabama’s auto industry firmed up its no. 3 ranking in the U.S. auto export race among states, trailing only Michigan and South Carolina as it shipped $7.75 billion in 2017. With the help of INEOS Phenol, Mobile will become the largest phenol producer in the world at 850,000 tons a year. A study commissioned by Atlas Van Lines determined Alabama is an “inbound” state, with 57 percent of the states’ moves involving newcomers.

Caddell Construction started work on the nearly $1 billion United States Embassy in Mexico City, the most expensive project of its sort in the world. BL Harbert International won a contract to build a new embassy building in New Delhi, India. The first wave of dining options began arriving at MidCity, the $350 million mixed-use destination in Huntsville. Doster Construction completed a hospital expansion project in Reidsville, Georgia.

Rick Hall, a Muscle Shoals music pioneer whose FAME Recording Studios shaped such notables as the Rolling Stones, died in January at 85.

Milton McGregor, a gambling magnate noted for his amiable personality and tireless battles with prosecutors, died in March at 78. 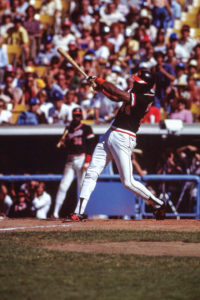 Mobile native Willie McCovey, sent to the National Baseball Hall of Fame for his work at the plate, died in October at 80.

Georg von Tiesenhausen, last of the German rocket team that launched the U.S. space program, died in June at 104.

Greg Calhoun, who founded a chain of minority-owner supermarkets in Montgomery, died at 66 in October. 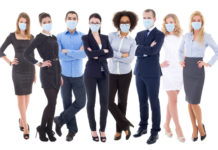 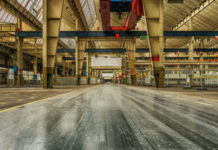 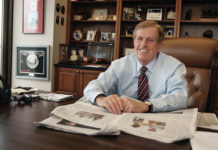 Bronner: Could mean economic ‘death spiral,’ but you’ve got to do it