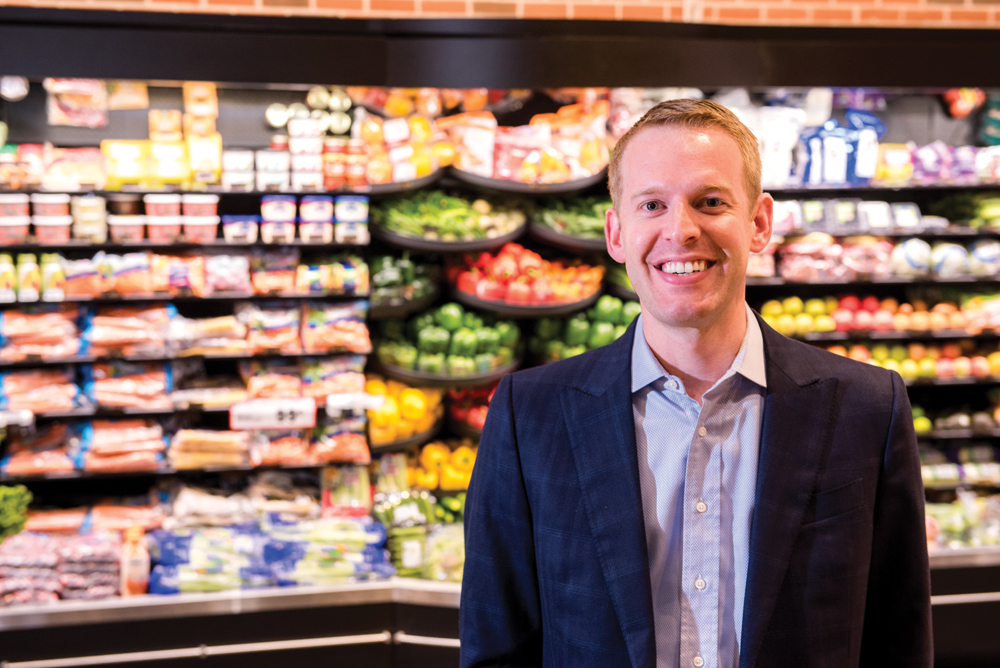 ABOVE “Life has plenty of demands already — jobs, family, so many things. Fitting in time to go buy groceries can be difficult.” With that realization, entrepreneur Bill Smith created app-based grocery delivery firm Shipt.

It’s a common problem. Taking time out for a grocery run can disrupt an entire day when you had no time to spare. This summer, a Birmingham entrepreneur introduced a solution to the problem — a smartphone application that’s the starting point of a shopping and delivery service.

Shipt allows customers to order their groceries via the app, set a time for delivery and have their order brought directly to their home, dorm or office.

For the thousands of members who have signed up for the Shipt app, buying groceries is as easy as ordering a pizza or booking an Uber. Its ease of use has made it a quick success in Alabama and other cities across the nation.

“We see growth throughout the entire online grocery market, ” says CEO Bill Smith, “but I feel confident in saying that Shipt is the fastest growing on-demand grocery delivery service in the country.”

After selling his previous company, Insight Card Services, in 2014, Smith knew that his next venture would make use of today’s “on-demand economy.” No one likes to wait, he reasoned, and ubiquitous access to the internet has made instant gratification more attainable than ever.

“The big driver for the on-demand economy was the rise of the smartphone, ” says Smith. “There are easily accessible businesses like Uber that offer services at the push of a button. As crowd-sourced services, they also offer part-time or even full-time work. Job hunters can begin their application from their phones now.”

Recognizing the significant amount of time lost on a typical shopping trip, Smith conceived Shipt to deliver customers’ goods directly to their door. Shipt began in 2014 as a same-day delivery service for big box retail.

Shipt’s initial funds came from the sale of Insight to GreenDot. “I wanted to put up my own money before I started asking for anyone else’s contributions, ” he says. With the help of family and friends, he raised $5 million by the end of 2015.

The company’s Series A round of fundraising brought in high-profile investors including Greycroft Partners of New York, e.ventures of San Francisco and the Birmingham-based Harbert Growth Partners.

Originally delivering goods from stores like Best Buy and Home Depot, the company has recently shifted focus toward grocery delivery to better serve customers’ everyday needs. “We heard a lot of people saying that what they really wanted to have delivered was their groceries, ” he says. “You don’t need a new laptop or screwdriver every day, but you’ll always need groceries.”

The update in business model reflects Smith’s outlook for the role of online shopping. “We’re in the middle of a complete shift in the way people buy groceries, ” he says. “The online marketplace is limitless, creating countless opportunities to enhance the digital grocery landscape. The way you buy your groceries today will surely look very different in the years to come.”

Smith realized the potential value in grocery delivery shortly after the birth of his second child. “We all went to the store together, and I quickly saw how that can be a lot to keep up with as part of your daily life, ” he says. “Life has plenty of demands already — jobs, family, so many things. Fitting in time to go buy groceries can be difficult.” Before he left the supermarket parking lot, Smith resolved to find a solution to this problem.

As the concept took shape, Smith opened up positions for shoppers to gauge public interest. “We wanted to make sure it really was a good idea, ” says Smith. “So we waited to see if we could get 1, 000 people to sign up before writing any code on the app.” They met their goal in three weeks, and began work on the application. Shipt launched its grocery delivery service in May 2015.

Shipt’s offices are located in the John Hand building in downtown Birmingham, Smith’s hometown. “I love the city, ” he says. “There are a lot of great things happening here. I wanted to base this business in Birmingham to contribute to the city’s growth and success.”

Smith acquired the John Hand building prior to launching Shipt. While pursuing a separate property at an auction, Smith recognized the building and placed a bid. “It wasn’t the reason I went there that day, but I was familiar with the building, ” he says. “I knew it would be worth it.” The John Hand building now bears the Shipt logo in the Birmingham skyline.

To use the delivery service, a customer may place an order via shipt.com or using the smartphone app. They may select from about 40, 000 items listed on the app. A local Shipt shopper then receives the order, picks up the items and delivers the groceries to the customer’s door. Deliveries may arrive as soon as an hour after the order is placed.

To join the Shipt team, shoppers must meet certain hiring requirements, including a background check and technological aptitude. Shipt also looks for a solid grasp on good produce selection. “Our shoppers know what to look for, ” says Smith. “They are knowledgeable and they can set their own schedules. We want our customers to enjoy the service, but we want our shoppers to enjoy it as well. You need great technology, great service and a great experience.”

The app is designed to reward shoppers that consistently demonstrate good service. Shipt uses a unique rating system that collects customer feedback and other data to allow the app’s top shoppers to find more business.

Shipt partners with locally established grocery stores, varying from city to city. In Birmingham, shoppers deliver from both Publix and Western, from H-E-B in San Antonio and Harris Teeter in Charlotte.

Both Charlotte and San Antonio are recent additions to Shipt’s growing national presence. Paying close attention to feedback and activity, the company’s expansion is largely customer-driven. “We see people in other cities download our app before we even arrive, ” says Smith. “That’s how we came to Detroit. The demand was already there. It’s a safer bet going into markets where the interest is already known.”

Smith and company endeavor to make a positive impact on every community Shipt serves. “In each city that we launch, we develop relationships with organizations that are making a difference in that area, ” says Smith. “We strive to be a generous corporate citizen, and truly enjoy the opportunity to give back.”

In Birmingham, Shipt has partnered with local non-profits like Growing Kings. The company then expanded to partner with organizations across the U.S. to support food security for families and children, including many American Food Banks.

A member of the millennial generation, Smith was raised in an entrepreneurial family and adapted to new technology as it was released. Growing up during the digital tech boom has granted Smith and fellow millennials a unique perspective in how technology can be utilized in everyday life. “Millennials are incredibly resourceful, and in my opinion, they drive innovation, ” he says. “I started Shipt because I saw an opportunity to develop a service that did not exist at the time.”

Shipt will continue to announce new markets in 2017, in pursuit of a company goal established at the outset. “Since the service began, our plan has been to reach 100 markets by the end of 2018, ” says Smith. “It’s an aggressive goal, and I think we’re making solid progress in that direction.”

Tom Little and Joe De Sciose are freelance contributors to Business Alabama. Both are based in Birmingham.