Three days after APM Terminals finished lengthening its dock as part of a $50 million expansion project at the Port of Mobile, it docked two container ships at once for the first time. The double docking in March was a milestone both for the privately operated APM and for a port that has grown steadily in an economy increasingly dependent on international trade.

“We added another 20 acres to the container terminal and lengthened the dock by 400 feet so we can dock two of these big Post-Panamax ships at a time,” says Jimmy Lyons, director and CEO of the Alabama State Port Authority. “Literally within a week of us finishing the dock we had two ships on it at one time. We got it done just when we needed to get it done.”

But by the end of April, stacked containers filled 60 percent of the space available and plans were in place to move ship cargo to the railroad yard if it was going to “dwell,” or sit around for a while at the port, according to Brian Harold, managing director of the terminal. Contingency plans also include moving containers off-site to other pieces of land in the area.

Lyons blames Covid-19 for crowding the docks, while Harold cites other factors, such as companies wanting more options for storing and moving cargo. But Harold says the additional space has proven useful in keeping cargo containers moving quickly and efficiently when needed, while other containers dwell.

The pandemic has disrupted the global economy and in turn the supply chains for transportation of cargo.

“The people that have got furniture, their distribution centers are closed, because their stores are closed. We have a lot of containers stacked in here that people don’t want to take right now.

“We were very fortunate; we built this latest expansion of the yard area really kind of thinking ahead as something that we would need in a couple of years, so that we could direct expansion into it. Hell, we need every bit of it right now.”

Lyons says the Port’s financial position is solid. Since the container terminal opened in 2008, Mobile has regularly been recognized as one of the fastest-growing ports in the country. A downturn in one sector has usually been offset by an upturn in another sector.

According to a report on the JOC.com website in October, 2019, “The port’s volume increased 24.7 percent to 182,453 loaded TEU from January through July compared with the same period in 2018, while the volume through all Gulf ports increased 13 percent to 1.58 million loaded TEU, the PIERS figures show. Loaded TEU imports through Mobile leaped 62 percent to 111,686 loaded TEU.”

But while the numbers were strong through March and steady in April, Lyons expected port business to “fall off a cliff” in May. The effects of the pandemic are being felt across the global shipping industry and by all ports. Because of the nature of the business — moving massive objects and cargo containers aboard huge ships — things won’t turn around overnight either.

For example, Lyons describes the impact of the pandemic on the auto industry. Between quarantine orders and rampant unemployment, car sales have dropped and new cars are left sitting on the lots.

Likewise, bulk shipping, roll on/roll off, and rail shipping are also slowing. Ships are being taken out of service, Lyons says. With oil prices collapsing, oil carriers are being used as floating storage rather than traveling overseas to ports

“Even things that were booming, like plastic resins, because oil prices have gotten so low here U.S. resin producers are not doing very well,” Lyons says. “That looked like a boom that would never end. It’s dropping off the charts.”

There are a few immediate bright spots for the Port of Mobile. “The Chinese are buying up a great deal of U.S.-made wood pulp,” Lyons says. He projects the port will end up shipping 200,000 tons of wood pulp to China this year.

And the great American toilet paper shortage is benefitting the port as well. Lyons notes that one of the key ingredients in premium toilet tissue used in the home is wood pulp, specifically wood pulp made out of eucalyptus trees in Brazil. He’s expecting another 90,000 tons of Brazilian eucalyptus wood pulp to come through this year.

None of the economic woes will affect dredging plans for the Mobile Ship Channel, a project long sought by the Port Authority. Work to deepen the channel to 50 feet is expected to begin towards the end of the year and will eventually allow the largest of the world’s container ships to dock at the APM Terminal, according to Harold.

But until the world is able to control the pandemic and the economy begins to recover, Port projects such as Phase IV of the container terminal expansion are on hold.

For example, the coal terminal sits on 500 acres, and parts are scattered all around, Lyons says. Port officials wanted to build a central parts warehouse this year to improve efficiency, but that project has been canceled. What Lyons describes as a big-ticket maintenance upgrade of one of the piers has been deferred as well.

The completed Phase 3, however, offers plenty of capacity. Storage capacity at the railyard increased by 75 percent. Gate lanes were widened. Where once the annual maximum number of containers that could come through APM was 500,000 TEU (Twenty-foot Equivalent Unit is a measurement of a shipping container), it’s now 650,000 TEU. When Phase 4 and the dredging project are completed, the APM Terminal will be able to handle 1.5 million TEU annually.

Currently four weekly services from Asia and one from northern Europe come through the port in an average week. “What we would like to attract is direct service to Latin America,” Harold says.

Even though Phase 4 may be on indefinite hold because of Covid-19, APM is talking with other potential users of the Port of Mobile and the available container facilities. “We’re confident that we will need all that capacity at some point,” Harold says.

Lyons is confident the Port can ride out the economic storm. “We’re going to come out of it,” he says. “It’s just the timing is the big question.” 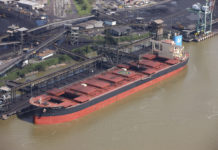