For more than half a century, the U.S. Navy in the Pacific Rim has relied on the U.S. Naval Hospital at Guam for healthcare. As the facility aged, it became clear that the hospital needed a modern, more efficient replacement, rebuilt from the ground up. The Naval Facilities Engineering Command Pacific selected Alabama-based architectural firm Sherlock Smith & Adams for the project, and SS&A has developed a new design for the hospital that will optimize naval healthcare in a modern facility.

“The design of the new U.S. Naval Hospital is unique, because it serves as the essential healthcare facility for the Pacific Rim, ” says David Parker, director of architecture. “As an important interface between the U.S. military and the local population, the hospital was designed to meet the day-to-day needs of service members and the local population, while incorporating design contingencies for mass casualty potentialities. The project is unique in location because of the strategic importance of Guam to the interests of the United States in the region.”

“The desired outcome of the project concentrated on the replacement of the aging but venerable 1950s-era Naval Hospital at Guam, ” says Parker. “The new design provides an attractive and functional response to the healthcare requirements of the military and supported dependents and retirees to serve the mission of the United States in the Pacific basin.”

The original Naval Hospital was constructed nearly 60 years ago, intended to be an inpatient facility. Although the building was designed with branching wings to maximize natural ventilation, the introduction of central air conditioning made the old layout obsolete. “The new facility’s compact, modern arrangement is designed with today’s emphasis on outpatient care and reduced inpatient care, with a focus on patient and family care, ” says Parker.

The project’s overseas location presented its own set of challenges that had to be considered. Natural events, like the seismic activity of the Marianas Trench or typhoon-force winds, were all factored in to the building’s design. “The design delivers a facility capable of providing the required services while withstanding all potential calamities, both natural and man-made, ” says Parker.

Sherlock Smith & Adams is no stranger to designing projects for overseas sites. Their architecture can be found around the world, including Europe, Asia, the Caribbean, Puerto Rico and South and Central America.

Design for the facility was completed in 2007, with all considerations made for the unique location and function. The final design includes architectural, mechanical and electrical planning, as well as medical planning among many other provisions. Construction is well underway and the firm anticipates a completion date of fall 2014.

Thomas Little is a freelance contributor to Business Alabama.  He lives in Birmingham. 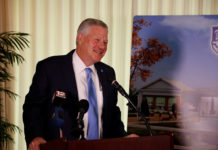