When completed in 2023, if things go right, the new bridge over the Mobile River will be the largest cable-stayed bridge in the United States and second in height only to San Francisco’s Golden Gate Bridge.

“This cable-stayed bridge over the Mobile River is at a minimum vertical clearance of elevation 215 feet, and when you compare that to other large projects, large bridges in the West, it is second in height only to the Golden Gate Bridge,” says Matt Ericksen, of the Alabama Department of Transportation and project engineer for the bridge.

“The Golden Gate is a different kind of bridge; it is a suspension bridge, but we will be the largest cable-stayed bridge in the U.S., when you look at it from minimum vertical clearance.”

Height is not the only one thing that distinguishes the I-10 Mobile River and Bayway.

For example, the $2 billion project is being funded through a public-private partnership, a P3 in today’s building vernacular. Alabama already has a handful of solely private bridges and roads — specifically, the Foley Beach Express bridge and toll road plus toll roads in Tuscaloosa, Montgomery and Prattville. But the P3 approach is a different animal.

The Trump Administration’s plan to improve the nation’s infrastructure over the next decade is partly responsible for an increase in P3s across the country.

In November, a statute will go into effect giving ALDOT the authority to enter into contracts with public or private entities for the construction of a public road, bridge or tunnel. The DOT may use any of a number of project delivery models in which “the design, right-of-way acquisition, relocation of structures or utilities, construction, financing, ownership, management, maintenance and operation, or any combination thereof, of a public road, bridge or tunnel project is accomplished by the department or on behalf of the department by any of the aforementioned entities or methods.”

The statute brings Alabama in line with 32 other states that have approved similar forms of legislation, allowing for public-private partnerships to build public projects.

Allison Gregg of PRR, a national communications company that specializes in transportation, environment and health, is the public information officer for the I-10 Mobile River Bridge and Bayway project.

Gregg says the project is in “the industry review period, and this is unique, because this is a public-private partnership that we do. Last year we released a list of qualifications, and we had four teams submit their qualifications, and from there three teams were selected to move forward to the request for proposals phase.”

Gregg says the final request for proposals will come at the end of the year. Before that, she anticipates public outreach, a final environmental impact statement and action from the Federal Highway Administration.

From the proposals, ALDOT will pick the best value — not the lowest bidder — and “construction should start by the end of 2019.”

“Best value” means factors other than lowest price can be considered in awarding the contract. Qualifications, quality, technical expertise and past performance are some of the factors that can be considered, according to the National Cooperative Highway Research Program.

With assets like bridges, the two biggest costs to consider over the asset’s life are construction and maintenance, says Sam Addy, senior research economist at the University of Alabama’s Center for Business and Economic Research. “Low bid only considers the construction cost. Best value considers the full life-cycle cost; that is, the sum of the two costs. Best value is better, because quality is implicitly considered, as higher quality often implies lower maintenance costs. Low bid only ensures construction to meet specifications.”

But the competition for government money for such projects is fierce.

Earlier this year, ALDOT failed to win a $250 million federal grant it was counting on to help entice bidders for the concession to develop and operate the project.

“It is not a setback in the schedule,” Gregg says. “We will just reapply for the grant again next year. The funding program is authorized for fiscal years 19 and 20, and they will allow us to reapply for it. We had a de-brief with representatives of the U.S. Department of Transportation, and they gave us really high marks, and what it came down to is that there were too many requests for them to fulfill. They received $12 billion in requests and they were only allowed to give out $1.5 billion.

“There are too many needs for transportation infrastructure funding that they are not able to meet, so we will reapply next year for it.”

There are three components to the project, according to Gregg.

“The first one is the Mobile River Bridge, and that is going to be about two and a half miles long. It will start in Mobile and go over the Mobile River, and it will have a pedestrian look-out on it, and then it will come down to meet the second element, which is the Bayway. The Bayway is seven-and-a-half miles long, and that is the viaduct that goes over Mobile Bay and joins in Baldwin County at Spanish Fort. In order to accommodate access, we are modifying seven access interchanges along that 10-mile span,” Gregg says.

“Drivers will either have transponders, which is becoming the national norm, where you get a little transponder that you put in your car or attach it to your windshield, and it will bill your account. Or, if you don’t have a transponder, a camera will take a picture of the license plate and it will send the bill, and this is a very important point for us to make, to the registered vehicle owner,” Gregg says.

Supporters of the I-10 bridge project say that in addition to easing traffic congestion, it will give area residents a great view of the area’s attractions, bring more than 18,000 new jobs, $22 million or so in new tax revenue and a new output activity level of $1.5 billion.

“I have been here 26 years now, and to be involved in a project that is so significant not only to the area but to the region is very exciting,” Ericksen says.

“Once we get into the construction, ALDOT will still have a role in overseeing the construction of the project, even though it is a public-private partnership,” Ericksen says, adding that ALDOT also will be involved in “enforcing the provisions of the concession agreement and the technical provisions.”

Ericksen says, “Concessionaire is the same as a developer so that when we select our proposal, we will concede to give them the operations and project limits for a period of 50 years. That is the concession period. Actually it is 55 years including construction.” The bridge could be open by 2023.

Wiley Blankenship, CEO of Alabama Coastal Partnership, says the main reason the new bridge is needed is “traffic congestion. If you go back and look at the Wallace Tunnels, the tunnels that run under the river, the I-10 tunnels, that’s what some people refer to them as, those tunnels were built for a capacity of 50,000 people, and we are exceeding 110,000 people per day.”

According to Blankenship, a lot of people think the tunnels are congested because of tourists. “That’s not necessarily true. It does have its peak moments during the summer months, because of people going to the beach, people from Texas, Louisiana and places like that, but the traffic congestion in the tunnels and then on the Bayway is true even outside of the tourist season.”

Blankenship and others involved in supporting the project stress that it is not just a Mobile project but also a regional one.

“Our commerce in this area runs east and west. It is vital link for anything between Mobile toward New Orleans, Baton Rouge over into Texas and beyond, and trying to go to Jacksonville, Florida is pretty horrendous because of the traffic through those tunnels,” Blankenship says.

The bridge has been a priority for his organization since it was founded six years ago, and for the Mobile Area Chamber of Commerce, Blankenship says.

As they’ve sought funding in Washington, D.C. and Montgomery, “Our justification for that is our economic impact. We as a region send a lot of tax dollars to Montgomery, and we think it has a direct impact if the bridge is not built. From an economic standpoint, not building the bridge could put Mobile at a disadvantage for recruiting,” he says.

“We did an analysis through the University of Alabama in Huntsville about four years ago called the Cost of Delays, and (the researcher) used trucking transportation to prove how the trucking industry is adding a surcharge on shipping going through Mobile just in anticipation of delays.”

There is, of course, some opposition to the new bridge.

“There were some people who were on the side of historic preservation,” says Blankenship. “They were looking at it from what’s it going to do to our skyline. What’s going to happen when you start drilling? Could it have an impact on the structure of some of our older buildings downtown in Mobile? The companies that we talked to and ALDOT said that is not going to happen.”

But he acknowledges that there will be some problems once the project is under way.

“I will tell you, it’s not going to be fun,” Blankenship says, anticipating lane closures and other traffic delays during construction. “But it is called growth, prosperity and moving forward.”

Ericksen says, “ALDOT understands the importance of this project and the issues with the traffic, and we are working on a huge project and a lot of steps have to be followed both from the environmental end and procurement and funding and finance. ALDOT is committed and already has a substantial investment in this project and is moving forward as best we can. We are going to do it right as quickly as it can possibly be done.”

Bill Gerdes and Dan Anderson are freelance contributors to Business Alabama. Gerdes is based in Hoover and Anderson in Mobile. 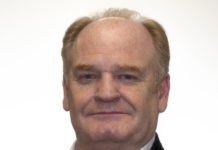 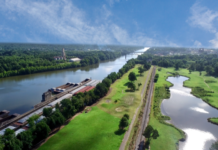