Americans are enamored with the SUV these days.

The sedan? Well, it seems U.S. drivers are just not into them the way they use to be.

But Hyundai Motor Co., based in South Korea, is one automaker that plans — at least for the foreseeable future — to continue assembling its Elantra and Sonata sedans in the United States at plants like Hyundai Motor Manufacturing Alabama (HMMA) in Montgomery.

While other carmakers are cutting back on producing sedans in the United States, Hyundai sees opportunity, says HMMA spokesman Robert Burns.

“The demand as a whole is not there today,” Burns says, “but because so many of the other OEMs have made the decision to step out of the sedan segment, it’s allowing us to sustain our business model.”

While Sonata and Elantra sales held steady, Tucson and Kona SUV models increased. And Burns expects the newly redesigned Santa Fe to be competitive, so that production will increase this year.

Meanwhile, Hyundai is moving forward on its $388 million expansion project, building a new 260,000-square-foot shop to manufacture engine heads. The investment also will pay for engine head machining equipment, as well as machining equipment in the existing engine shop that HMMA is retooling, Burns says.

The new engine head shop will help the plant prepare to produce the next-generation engine, the Theta III, that will support vehicle assembly not only at HMMA, but also at Kia Motors Manufacturing Georgia. Production of the Theta III is set to begin in spring 2019, Burns says.

Besides making vehicles for markets throughout the United States and Puerto Rico, HMMA also exports vehicles to Canada, Mexico and El Salvador. HMMA exported approximately 17,000 vehicles by the end of 2018, Burns says.

Last fall, the United States, Mexico and Canada signed a new trade pact at the G-20 Summit in Argentina that aims to replace the North American Free Trade Agreement (NAFTA). NAFTA removed tariffs on goods traded among the three nations.

Among the requirements of the new agreement, vehicles must have 75 percent or more of their parts made in North America to avoid a tariff. Under NAFTA, the requirement was only about 62 percent. Also, by 2023, between 40 and 45 percent of the auto parts must be assembled by workers making at least $16 an hour.

The next step is for the legislative bodies in all three countries to ratify the new agreement before the pact goes into effect.

“Hyundai has always supported fair trade,” says Burns, “and we’re pleased that the trade agreement between the United States, Canada and Mexico remains a trilateral agreement. We as a company have a North American presence because we export to Canada and Mexico.”

But the new agreement is exempt from the Trump administration’s tariffs of 25 percent on steel imports and 10 percent on aluminum imports.

Last spring, the United States and South Korea renegotiated the existing U.S.-Korea Free Trade Agreement (KORUS). Under that revised agreement, South Korean steel imports will not be subject to the 25 percent tariffs, but instead to a quota of 70 percent of the average yearly steel imports between 2015 and 2017.

However, automakers like Hyundai remain concerned because the Trump administration is using Section 232 of the Trade Expansion Act of 1962 to justify conducting investigations on steel and aluminum imports, as well as vehicles and auto parts, in the interest of protecting national security.

As of December, the U.S. Court of International Trade was deliberating a lawsuit brought by steel importers over the matter but had not yet reached a decision.

Burns says the tariffs under Section 232 could have a devastating effect on the overall automotive industry.

“We’re concerned that we can’t really change the supply chain overnight if they choose to do a 25 percent tariff on parts. And that would significantly raise our costs here in Alabama for those parts that may be imported. So we’re hoping the administration doesn’t implement that tariff because we strongly believe that imported autos and auto parts are not a national security threat.”

But for now, the team members at HMMA are continuing to assemble Elantras, Sonatas and the Santa Fe. The plant currently runs three shifts, five days a week, Burns says.

“We are here for the long run.”

Gail Allyn Short is a freelance contributor to Business Alabama. She is based in Birmingham. 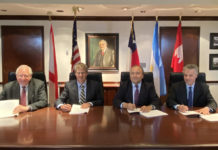 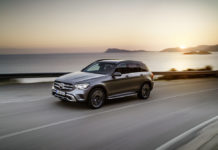 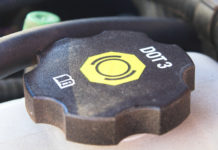