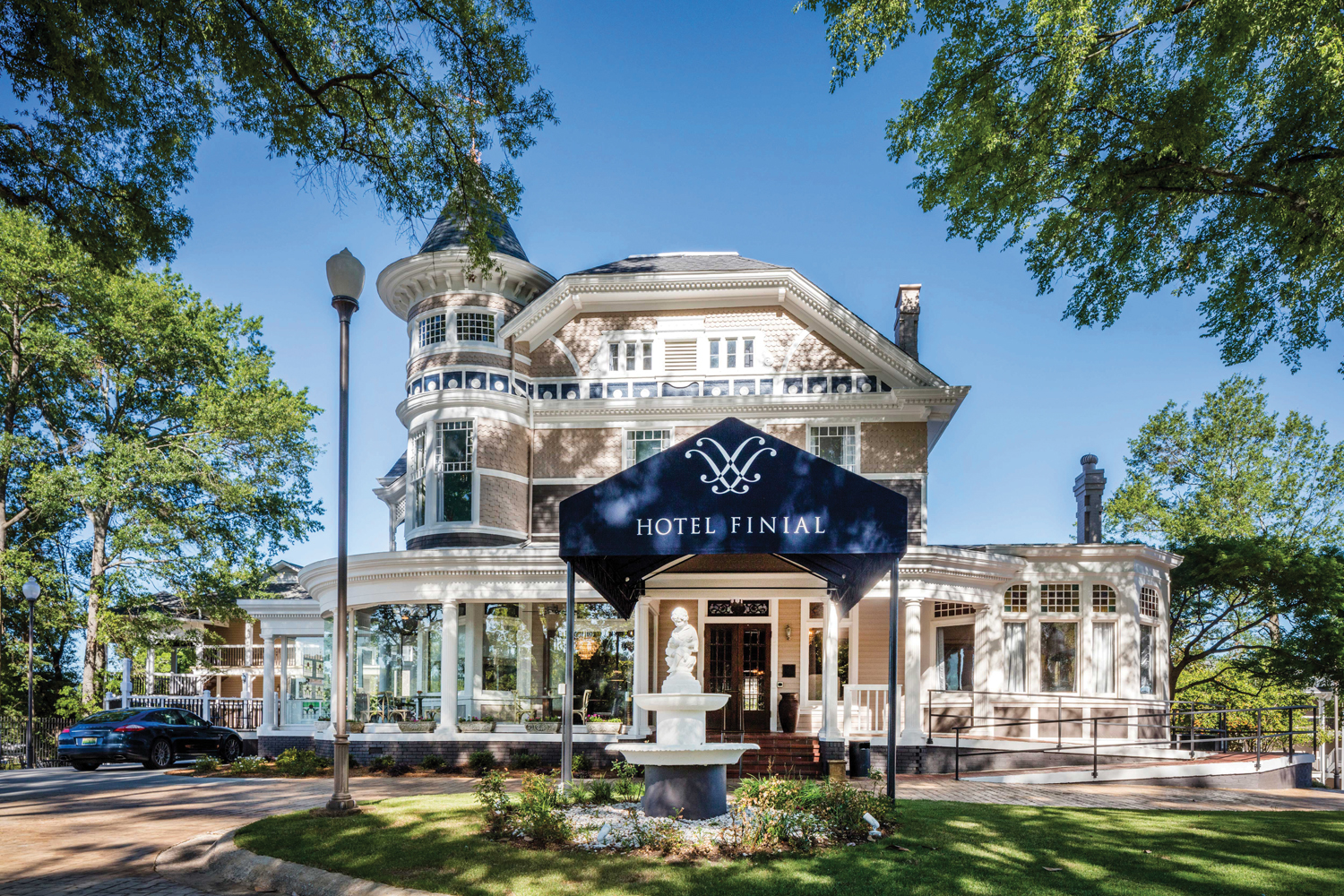 The house sits on a small hill surrounded by fast-food restaurants and discount stores. A glorious link to Anniston’s 19th-century past, the house is a beloved landmark in this town, an ornate reminder of an era when traffic noise consisted primarily of the clip-clop of horses. And as recently as two years ago, this historic Queen Anne-style structure — once a private home that had been turned into The Victoria Inn — was in danger of falling apart.

That is when Ginger and Del Marsh stepped in and, much to their own surprise, became hotel owners. Even though neither of them has experience in the lodging industry, they purchased the house and adjacent 55-room hotel from the City of Anniston in 2015, invested approximately $2.5 million on an eight-month renovation and reopened in March 2016 as Hotel Finial.

“It’s a risky venture. There’s no two ways about it, ” says Del Marsh, who has been president pro tem of the Alabama Senate since 2011. “But Ginger and I talked about it, and we just felt like the historical significance of this home is important enough that we’re willing to take that risk in order for it to be preserved.”

Built in 1888, the house had only three owners before it became The Victoria in 1985. The hotel changed hands several times over the years and was even briefly owned by nearby Jacksonville State University. But nobody seemed interested in investing the type of money needed to maintain such an aging structure, and both the house and hotel slowly fell into disrepair.

Concerned about the deterioration of the historic home, the City of Anniston purchased it from JSU in 2013 for $710, 000, with the intention of finding a private developer to restore the structure. The city issued a request for proposals in 2014, but nobody responded. A second RFP was issued in 2015, and the Marshes put in the only offer.

“No one else wanted to take it on, which is understandable, because it was a good bit of money to restore it, with a lot of uncertainty connected to it, ” Del Marsh says. “This facility is not your normal situation with a hotel. If I were out there picking businesses to get into, this wouldn’t be one of them. It has its challenges.”

Rather than simply giving the hotel a facelift, the Marshes opted for a total renovation. Every guest room behind the main house was gutted and replaced with new lighting, plumbing and flooring. Similar work was done on the house, which has six guest rooms. The hardwood floors were refinished, extensive
lighting was added and much of the plumbing was replaced.

The beds in the guestrooms were made by an Anniston-area ironworker, and the headboards were constructed out of hard pine salvaged from the old Avondale Mills. One of the tables in the bar was created out of a large piece of an oak tree that fell on the property during the renovation. Even the 9-foot-tall weather vane atop the turret was refurbished and now stands as the hotel’s namesake — a “finial” — a decorative feature on top of a roof.

“In terms of the final product from where we started, it’s exceeded our expectations, ” Del Marsh says. “We’re very pleased with the look, and it’s been well received. The locals are very appreciative that it’s been saved.”

But restoring the hotel was only half the challenge. Now the task is to run the hotel and try to make it profitable. While Birmingham-based Jackson Hospitality Services is responsible for much of the day-to-day operation, the Marshes often are on site helping out however needed. In fact, Ginger Marsh says it is not unusual for the couple to go home to eat dinner, then return to the hotel for several hours.

“We’re learning things every day, ” says Ginger Marsh, who previously worked as a teacher. “Del and I are so hands on. I’ll go out and pull weeds or sweep the deck. There’s nothing that he and I don’t do or work on. We plan on learning every aspect of the business, including cleaning rooms and bartending. With a small staff (16 employees), if somebody gets sick or can’t make it to work, we want to be able to step in and help out.”

Ginger Marsh also has taken charge of coordinating events at the hotel, through a business she started along with local interior decorator Patsy McKinney, called Beyond the Finial. Ginger Marsh says the hotel is a popular location for weddings, baby showers, holiday parties and business gatherings, as well as for bicyclists who ride the nearby Chief Ladiga and Coldwater Mountain trails.

“This place lends itself to some great parties, ” Ginger Marsh says. “Any event that can be thought of, we can create it here. We had a group come over from Birmingham to play the Robert Trent Jones golf course (at Silver Lakes), and they wanted to have a party on our patio afterward. We decorated the patio with golf memorabilia and lit some outdoor lamps. They were surprised that we did all that just for them.”

While Hotel Finial already is experiencing some success as a destination for events or weekend getaways, Del Marsh says the true challenge is tapping into the Monday through Thursday business traveler. The hotel is located nearly five miles from I-20, and there are several chain motels near that exit.

“We’re running around 30 percent occupancy, and the motels at the interstate are around 70 percent, ” Del Marsh says. “We’ll continue to try to build that up. We think we have a lot to offer with this facility. The reviews from people who stay here are great. The tricky part is finding a way to separate yourself from the others.

“We are committed to this project. We think it’s a partnership with the city. People stay here and go downtown to eat and shop. We’re starting to see local businesses use the hotel when they bring customers in. Our goal is to make it profitable, and I think we can do that.”

Either way, the Marshes say they have no regrets about taking the chance. For an Anniston native like Ginger Marsh, who remembers seeing the home colorfully lit for Christmas when she was a child, saving the house is well worth the effort of owning the hotel.

“We knew it was going to be a huge undertaking, and, at first, we weren’t certain that we really wanted to do it, ” Ginger Marsh says. “But in the end, with the history of this home, it was something that needed to be done. We just wanted to restore it and keep it here. Basically it’s a gift to the people of Anniston.” 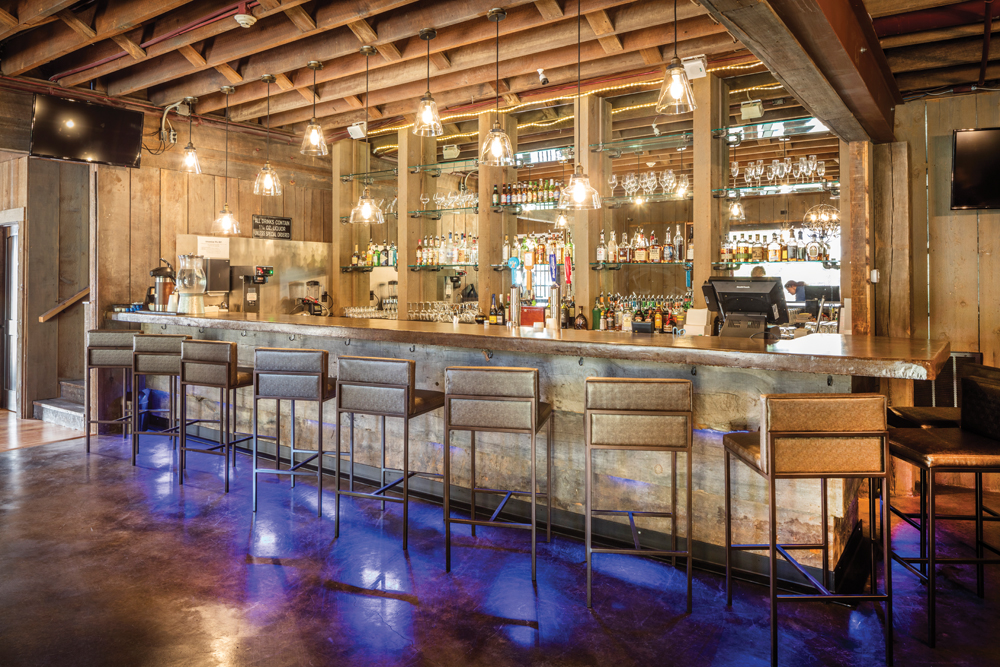