For Germans doing business in Alabama, the phrase “Sweet Home Alabama” is more than a state slogan borrowed from the 1974 Lynyrd Skynyrd hit song. German companies indeed feel at home here and the feeling is mutual.

And for Alabamians, what’s not to love? For the past two decades, German companies have invested $8.4 billion in Alabama and created nearly 15, 500 jobs in the state.

About 90 German-owned companies now operate in Alabama, observes Tine Hoffmeister, executive director of the AlabamaGermany Partnership, whose aim is to promote business opportunities and cultural exchange. The nonprofit was created nearly 20 years ago, after Mercedes-Benz built its first U.S. manufacturing plant in Vance, which kicked off Alabama’s thriving auto industry.

“There are many reasons why German companies want to locate in Alabama, such as low cost of living, low property taxes, an excellent port, a strong transportation system — river, rail, road and air — and a climate without winter weather delays, ” Hoffmeister says.

“Most important is the Southern hospitality and ‘can do’ attitude. And as any expat can tell you, Alabama has a lot more sunshine than Germany!”

Hoffmeister says the state’s 2016 New & Expanding Industry Report released in May “showed another solid year of business recruitment and support.” Germany placed No. 1 in job announcements in 2016 and No. 2 with $213.5 million in investments.

Exports from the state to Germany jumped 29 percent in 2016 to nearly $3.2 million. The top category was transportation equipment, with shipments valued at $2.7 billion, an increase of 24.5 percent.

Von Hatley, managing director of Jones Walker Consulting LLC in Mobile, which provides non-legal economic development services to the public and private sectors, says at the highest level, foreign companies look at four components to mitigate risk when making their decision to invest. These include a suitable site with adequate infrastructure, a stable business and political environment, availability of workforce and quality of life.

“For certain projects, Alabama scores at the top of the list not just in one, but all four of these categories, ” Hatley says. “When you want to win a project, you have to score high enough to clearly separate yourself from the location in second place.”

Many suppliers followed Mercedes to Alabama. This led Alabamians to seek out and focus on German companies, thus enhancing the relationship between Alabama and Germany.

Hatley says the opening of Mercedes “got the ball rolling” and was a major development in establishing German and Alabama ties, but not the first. 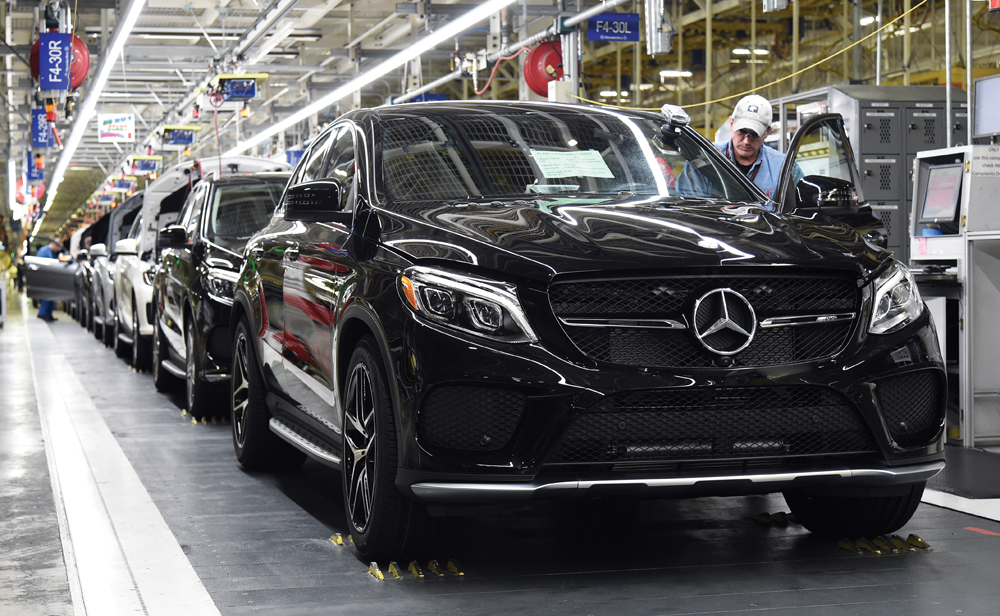 Cars rolling off the line at Mercedes-Benz U.S. International in Tuscaloosa County are a tribute to the German company that breathed life into Alabama’s automotive industry.

Those ties took root earlier in the space and chemical industries. It was German scientists who turned Huntsville into Rocket City when they launched the first American satellite into orbit in 1958, and in 1969 landed astronauts on the moon.

The first German company to set up shop in Alabama was Evonik Industries, formerly Degussa, which opened its largest North American chemical manufacturing site in Mobile 44 years ago. Additionally, German-owned Diehl Aerospace celebrates its 30th anniversary in Sterrett this year.

Arnold says European companies must have access to U.S. markets: “There’s not any mid-size or large company that can miss out on the United States, and these companies need to be local and present in the market and have proximity to customers.”

Hatley points out that both foreign direct investment and domestic investment are needed to maintain a healthy, diversified economy.

The AlabamaGermany Partnership has been creative in expanding cultural alliances, building friendships and bridging the cultural divide, says Hatley, who has observed the camaraderie between the Germans and Alabamians in both professional and social settings.

Once a German-owned company decides to expand its operation to Alabama, the AlabamaGermany Partnership steps in to ease and support the transition.

“AGP does not function as a recruiter working on new German prospects, ” Hoffmeister explains. “Instead, when a German company reaches the decision to set up operations in Alabama, the AGP can help provide backup for the expats and their families when they arrive in Alabama for the first time. It can be a challenge for a new family to navigate in a new country with a different language, school system and culture.”

The AGP provides business, social and cultural functions to help build the relationship between Germans and Alabamians. The AlabamaGermany Partnership dinner is held every year to bring together German investors and executives throughout the Southeast and to recognize German companies that have expanded to Alabama. In addition, the AGP started a new tradition this year with a dinner hosted by Auburn University, and the University of Alabama will be hosting a dinner in 2018.

“AGP is an extremely active organization and most of Alabama’s leading German and American companies are active participants, ” Hoffmeister says. “This year, our focus has been on connecting our German companies with the local educational institutions.”

Tuscaloosa-based JamisonMoneyFarmer, one of Alabama’s leading accounting firms, hosted the 2017 U.S.-German Summit this spring with an emphasis on global business trends, cross-border transactions and international tax strategies. The 2017 summit is the fifth annual meeting of advisory firms who serve clients in Germany and the United States.

To provide specialized international accounting services to companies interested in developing business in the United States or Germany, JamisonMoneyFarmer partnered with Crowe Horwath Germany to form a strategically aligned group of advisors who specialize in international business services. This alliance was made possible through JamisonMoneyFarmer’s affiliation with CPAmerica International, an association of independently owned CPA and consulting firms in the United States.

Bobby Bragg, JamisonMoneyFarmer’s director of practice growth, says his firm focuses on serving the clients of German-owned companies in Alabama and provides high level services locally, as well as serving those abroad.

According to the U.S. Department of Commerce, more than 8 percent of foreign direct investments in the United States come from Germany. Manufacturing is by far the largest sector targeted by German investment. Other areas of German activity include trade, insurance and finance.

The latest German-owned company to expand to Alabama is Winkelmann Group, a high-tech manufacturer serving aerospace and other industries. The company plans to invest $12 million to build a metal-forming plant in Auburn, which could provide 50 new jobs.

Bolta Group, a German-based auto parts supplier, recently opened a $48.7 million production facility in Tuscaloosa. The 200, 000-square-foot facility is expected to employ 350 people by the end of 2018.

Bob Smith, assistant director of business development for European strategy at the Alabama Department of Commerce, has toured Winkelmann and Bolta plants in Germany and found them to be “very high tech and efficient.”

Most German companies, he says, are well organized and typically family-owned operations.

“German companies are looking for new locations to expand their business and they are a pleasure to work with, ” says Smith. “Alabama and Germany are a good fit.”

Says Alabama Secretary of Commerce Greg Canfield: “German companies operating in Alabama have helped reshape and strengthen the state’s economy in many positive ways. Clearly, Mercedes-Benz played a major role in the creation of the state’s auto industry. At the same time, there have been significant investments from German companies in industries including chemicals, aerospace, steel processing and more.”

The Alabama-German relationship is an important one, he adds, and “we look forward to working with more German companies as they create jobs across Alabama in the future.”

Jessica Armstrong and Cary Norton are freelance contributors to Business Alabama. She is based in Auburn and he in Birmingham.