Over the months, we are introducing several of Alabama’s wealthiest and most vibrant communities. This month we look at Fairhope — its history and ongoing appeal.

The City of Fairhope, now home to more than 19,000 people, began in November 1894 as a “Single Tax” colony of 28 members of the Fairhope Industrial Association, followers of the teaching of economist Henry George. As they chose the site of the former Alabama City, atop the bluffs on the eastern side of Mobile Bay, the creators of the community said they wanted a “fair hope of success” by cooperating to create a haven of equal opportunity, reward for individual effort and freedom from monopoly.

While the town has come a long way from its origins, attracting more than its fair share of artists, authors and other creators along the way — that original independent spirit and dedication to protecting entrepreneurship among its citizens is still strong, says Mayor Karin Wilson.

“We want to continue to protect and celebrate what made Fairhope great,” she says.

Early in its history, Fairhope drew notables like Sherwood Anderson, Clarence Darrow and Upton Sinclair for winter visits. Today, Fairhope charms visitors year round with its friendly spirit, as well as its picturesque surroundings, including a historic downtown, tree-lined neighborhoods and natural areas. Southern Living Magazine honored it as Best Small Town in the South in 2016. 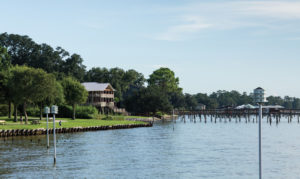 “It’s really like nowhere else,” Wilson says. “And it’s the people who make it that way.”

Wilson and others in Fairhope fear, however, that their city could become a victim of its own success, as surrounding Baldwin County areas without protective zoning and architectural standards rapidly grow. Fortunately, she says, $650,000 has been designated from Restore Act funds for a Fairhope Area Community-Based Comprehensive Land Use Plan. “We’re trying to bring everyone together so that we can avoid congestion and all continue to enjoy the unique lifestyle we have today,” Wilson says.

Kathy Hagood and Elizabeth Gelineau are freelance contributors to Business Alabama. Hagood is based in Homewood and Gelineau in Mobile.