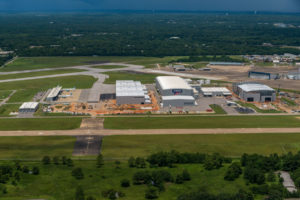 Designed specifically for the 100- to 150-seat market, the plane was developed by Bombardier in Mirabel, Quebec, Canada, before joining the Airbus product lineup. Airbus also assembles A320 family aircraft in Mobile.

Workers from Alabama trained in Mirabel before returning to Mobile to start A220 assembly here.

“It’s exciting to see the start of production on the A220 in Mobile,” said Paul Gaskell, president of Airbus U.S. A220 Inc. “The production team has been training alongside their colleagues in Mirabel, and have returned ready to put their knowledge to work. We look forward to all of the milestones along the way to a successful delivery to the customer next year.”

The first plane from the Mobile line is slated for delivery to Delta Air Lines in the third quarter of 2020.

The A220 was designed for fuel efficiency achieved through specialized materials, aerodynamic design and Pratt & Whitney’s newest PW1500G geared turbofan engines, which combine to reduce fuel use by 20 percent.

As of June, 551 of the new aircraft are on order and the company says, “the A220 has all the credentials to win the lion’s share of the 100- to 150-seat aircraft market, estimated to represent 7,000 aircraft over the next 20 years. 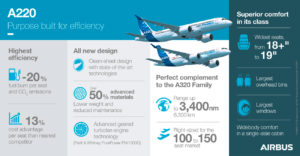 “The expansion of our commercial aircraft production in Mobile to a second product line — with 400 additional jobs to support it — further solidifies Airbus’ standing as a truly global aircraft manufacturer, and confirms without a doubt that Airbus is an important part of America’s manufacturing landscape,” said Airbus Americas Chairman & CEO C. Jeffrey Knittel.

Beyond its two final assembly lines in Mobile, the European-based Airbus has engineering centers in Mobile and Kansas, training facilities in Florida and Colorado, materials support and headquarters in Virginia, a think tank in California, a drone data analysis business in Georgia, helicopter facilities in Texas and Mississippi and a satellite manufacturing facility in Florida.