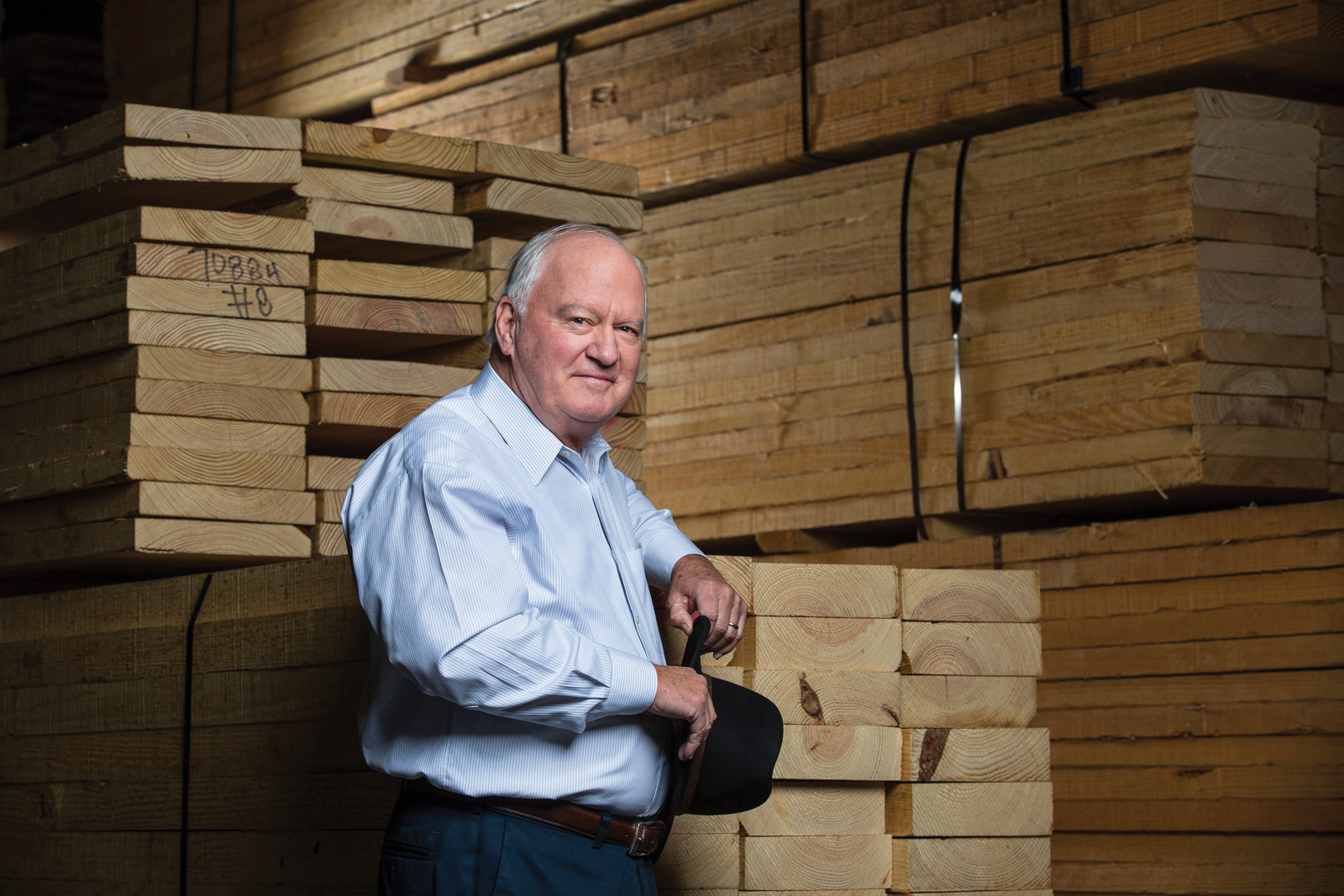 ABOVE Worldwide customers appreciate good wood and good service — and Lane Merchant works to make sure they get both.

The aroma of fresh lumber permeates the Mauvila Timber Co. warehouse like fragrant bread in a French cafe. Placed in neat rows, Southern yellow pine, cut and sized, waits delivery from Loxley, Alabama, to the world.

Lane Merchant sees “the warmth of wood, ” and he should know. Merchant made it happen, and timber is his life.

“I love wood, ” he says, leading an impromptu tour of his Mauvila Timber warehouse.

“See this?” he asks, rubbing a sheet of flawless pine as if it were a Persian cat. “There are no knots or blemishes. That’s important to customers, especially Europeans. They want their product ‘clear’ — no splits, no blemishes, nice and straight.”

“To my overseas customers, wood is more than building material, ” he adds. “It is a thing of beauty.”

Mauvila Timber is a 600, 000-square-foot warehouse stocked primarily with Southern yellow pine. Just off of Interstate 10 and Alabama Highway 59 at the Loxley exit, the facility is part of the 47-acre KeyPort Warehousing complex, owned by Baldwin County’s Gary Unger.

He has never been an owner but always held the title of vice president of sales and operations. Gary Unger is president, CEO and business owner. As vice president, Merchant is an army of one.

KeyPort supplies warehouse workers and clerical support, but ask Merchant for the number of full-time employees at Mauvila Timber, and he raises an index finger, points to himself, and smiles, “me.”

His duties are many — buyer, seller and warehouse supervisor, who manages orders, monitors inventory, works quotes and decides what wood goes where and when.

Suppliers today are eight to ten mills from Alabama, Mississippi and other nearby Southern states.

His customers are the world. Europe, North Africa, Libya, Algeria, Egypt, Turkey, Jordan and the U.S. are in his contact list. Southern yellow pine is his calling card.

“Southern yellow pine is known for beautiful grain and can be used for stain grade trim and molding, furniture, cabinets as well as construction, ” he says. “In overseas markets, you see it used a great deal in wooden floors, walls and furnishings. Typically, their wood is not painted but featured for its beauty.” 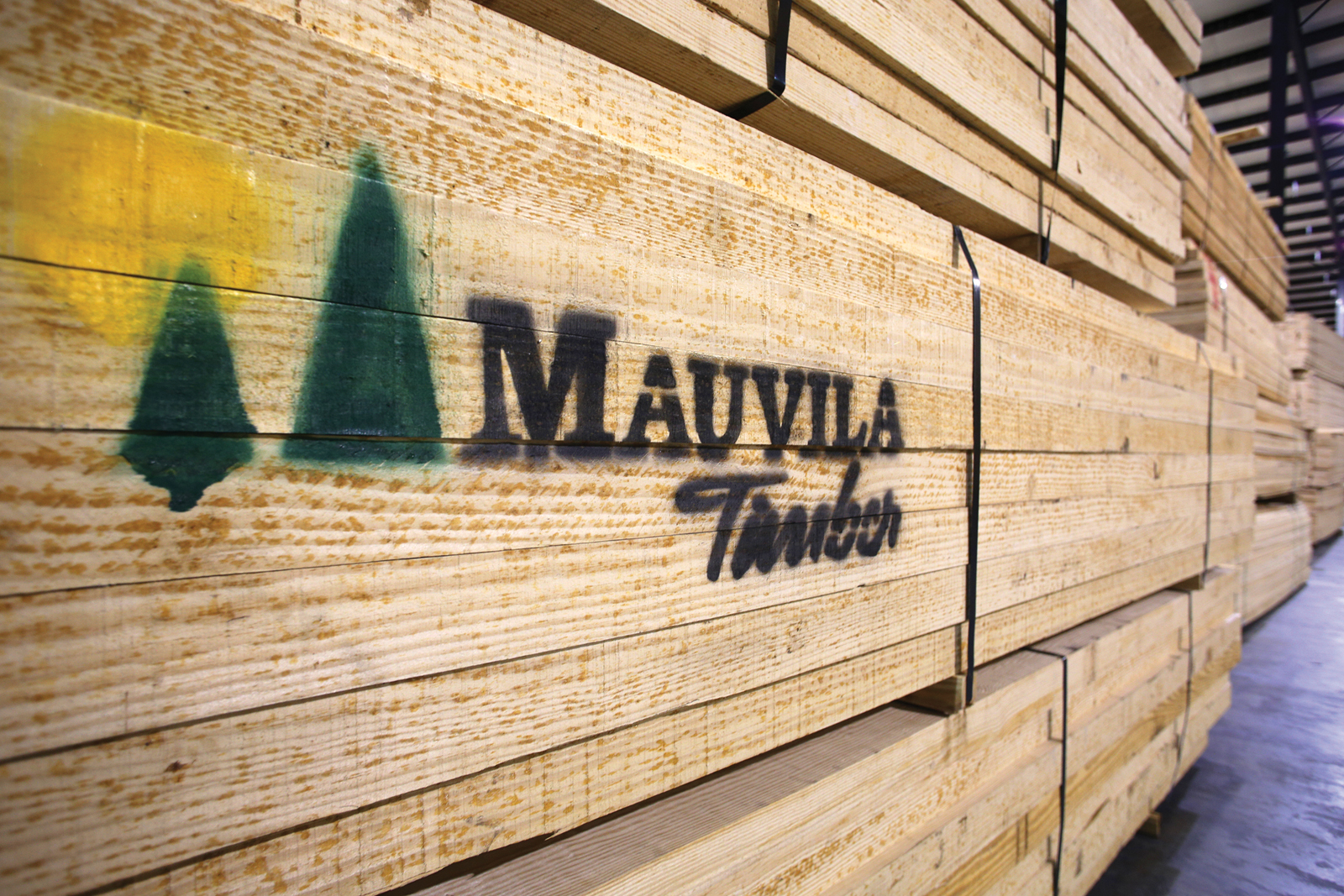 ABOVE Southern yellow pine with the Mauvila logo is an ambassador from Alabama’s forests to the world.

Some met him long before Mauvila Timber days. “He and I have been working together since 1983, ” recalls Javier Montesinos, owner-director of Top Timber Co., of Barcelona. “I remember his first trip to Spain. I picked him up at the airport. We have developed a great business and personal relationship over the years. In business, Lane is very competitive and always looks for the right material for the market demand.”

Merchant originally did not set out for a career in international timber sales. He studied engineering at Auburn University but left school in the late 1960s. After a few engineering jobs, while still in his early 20s, he sought a different classroom in the lumberyard.

“I just backed into it, ” he recalls about his career and the learning process. “You learn the ins and outs. All of a sudden you have experience and skills in this very unique field.”

In 1972 he hired on with Travers Lumber in Mobile. “It was good on-the-job training, ” the Mobile native recalls, “I learned from the ground up, starting as a clerk, tallying lumber and filling orders.” Lumber sourcing requires recognizing the good, the bad and the ugly, and ensuring that only the good makes it to the docks.

Customers testify that Merchant gets it. “Over time I learned how to recognize quality lumber and how to grade it, ” Mauvila’s vice president says.

His resume includes years with    Georgia-Pacific, Central National-Gottesman and P.J. Lumber. At each stop, Merchant honed his craft, learned new skills and carved a career from wood. And he developed an international contact list that reads like roll call at the United Nations.

The year 1983 was his pivotal point. Merchant, who had never been out of the country, was asked to remedy a client issue in Italy. “It was interesting, ” he says. “Here I was a young guy from South Alabama, not knowing a whole lot about world things, suddenly in places like Torino, Naples and Rome.

“The Italian customer claimed the product had knots in it. I knew it did not. We settled.” Problem solved and Lane Merchant completed his first on-site and in-person international business transaction. Many followed. “I often had a translator, ” he recalls. “Some customers spoke English but most did not.”

Through the years he developed insights into what a world customer base wants. He says that Southern yellow pine is inexpensive for them as compared to what they used to buy — Douglas fir, which he claims priced itself into non-competitiveness.

The Gulf Shores resident developed relationships with the world by visiting it often. “You have to stay fresh and see what they are doing and what your competition is doing, ” he says. “I constantly visited lumber exhibitions; there’s a good one in Turkey. You don’t just meet Turks, but buyers from everywhere else, too.”

Today the 71-year-old mainly travels the world for vacations — Budapest, with his wife, this spring, for example. As for his work, agents across the world report to him. They send in leads and inquiries from customers abroad, “And I match them with what they need, ” he says, adamant that sourcing means everything. “Supply is very important in this business. Product has to be perfect when leaving here, dried and cut properly.”

Mauvila has its own trucks, loaded at the Loxley facility, bound for the Mobile Container Terminal and on to points throughout the world.

There have been business downturns, and it is often tricky predicting world markets and competitors. “PVC, plastic and aluminum products have given us a hard time, ” says Merchant. Competitors have figured a way to put a grain on plastic or they glue a veneer to particle board, making it look like “real wood.” But it’s fake.

Merchant connects local suppliers of good quality Southern yellow pine with international clients craving it. Every day he fulfills basic business principles of Business 101. Find a need and fill it. And he does, as Loxley’s wood broker to the world.