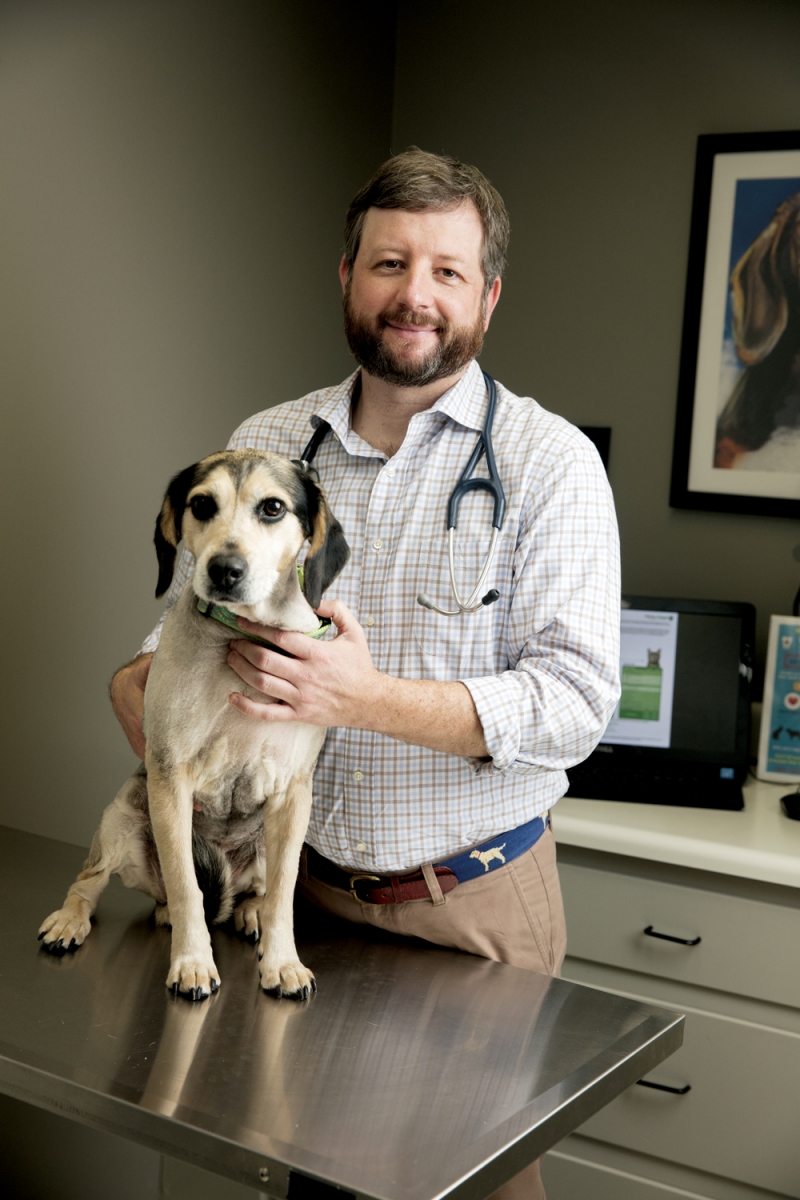 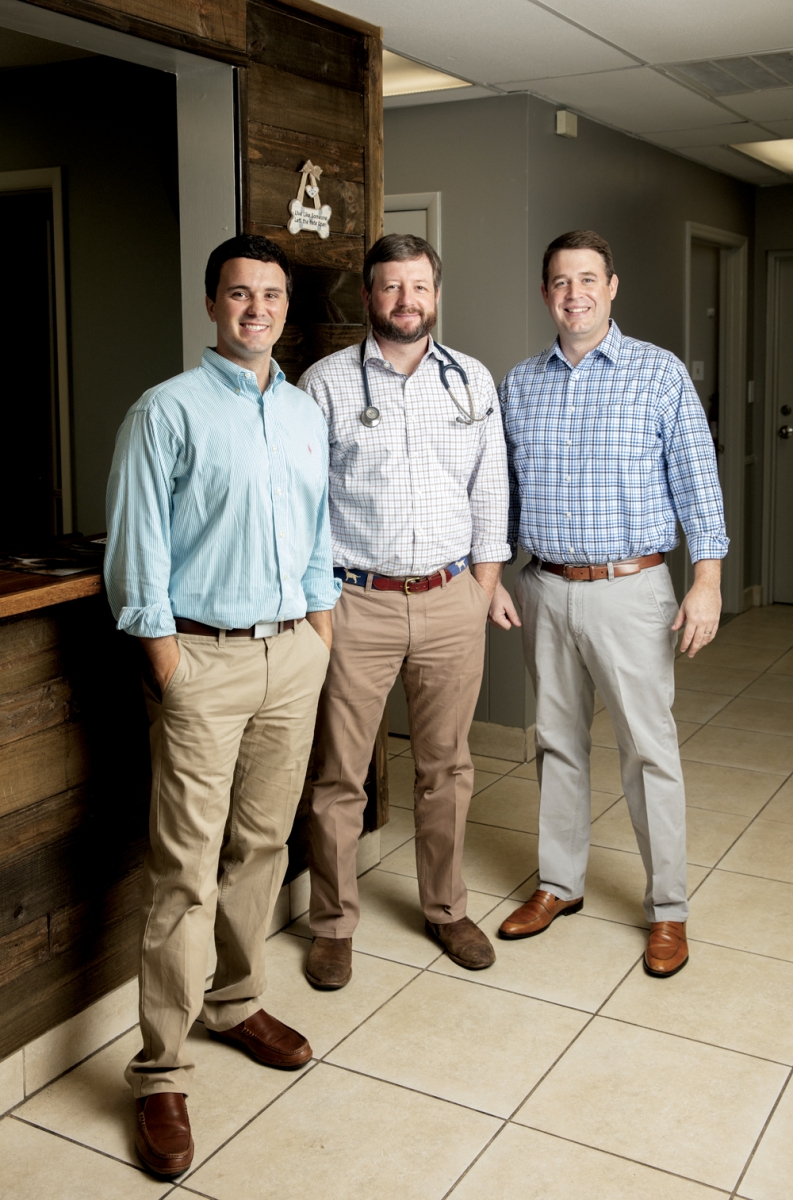 ABOVE RIGHT Price teams with fellow veterinarian Chase Whitworth (left) and attorney Barron Lakeman (right) to create a firm that handles the business side of a veterinary practice so the vets can concentrate on their patients.

In the world of veterinary medicine, there are a number of old dogs who are not interested in learning any new tricks. The field is dominated by vets who are in their 50s and 60s and have grown weary of all the paperwork and financial issues associated with the business side of their practice.

And yet, these veterinarians still love what they do. They have a passion for animals and care about the owners who are devoted to their pets. They don’t want to abandon their extended furry family, but they also are doggone tired of all the other aspects of the industry. These vets simply want to take care of Max, instead of worrying about deciphering the latest tax.

One option is to sell their practice to a large corporate entity, such as Veterinary Centers of America or National Veterinary Associates, which will handle the business side while allowing the vet to continue working with the animals. The problem for many vets in the South is that these companies largely are based in the Northeast or the West Coast and oversee hundreds of practices. So they can have a difficult time establishing a personal connection with a single Southern practice. That can be a deal-breaker for some vets, whose business is based literally on warm and fuzzy relationships.

Alabama native Jay Price believes he has a solution. Along with fellow veterinarian Chase Whitworth and business associate Barron Lakeman, Price started Southern Veterinary Partners in October of 2014. Headquartered in Birmingham, SVP will have expanded from an initial group of three clinics in Alabama to a total of 25 clinics in eight states throughout the Southeast by this summer, with more growth on the horizon. In the process, SVP has grown from less than $4 million in revenue to more than $40 million.

Price says SVP is filling a void in the Southeast, where some independent veterinarians have been reluctant to sell their business to a large corporate conglomerate that seemingly is more interested in the finances than in taking care of Fido.

“In the last few years, the landscape of veterinary medicine has really started to change, ” Price says. “This field is mostly recession resistant. People are going to take care of their pets, regardless of the economy. That’s driven a lot of clamoring for private-equity venture capitalists to put money to work in the veterinary industry.

“But when you look at the corporate landscape of where the bigger players have hospitals, they don’t have a lot of locations in the Southeast, and that’s because there’s nobody headquartered in the Southeast. So we looked at it as we can take the grassroots approach by acquiring hospitals and keeping them veterinarian owned and operated and led. No other company around here can say that.”

Price grew up in Phenix City and often spent time at his grandparents’ farm in the small town of Newville. He would get up before sunrise and venture out with his grandfather to feed the cows and the hogs, usually with the family dog tagging along. His love of animals led him to start working part time at the local animal clinic at age 12, and he soon realized that he wanted a career in veterinary medicine.

But Price says he was interested in business as well. His mother has a degree in accounting, and Price says, “the numbers side of things has always fascinated me.” So while many of his older colleagues in the business are eager to shed the financial responsibility of running a veterinary practice — inventory, HR, payroll, marketing and such — Price relishes the challenge of making the numbers work for both himself and the people in the industry.

“The business aspect of it really drives me, ” says Price, who still practices as a vet, usually two days a week. “I get up every morning wanting to find bigger and better ways that we can do things. You work with a staff at a small hospital for so long, it becomes like a family. I want to take care of those folks, and it is really difficult to do that owning just one hospital.

“By expanding, we can offer better employee benefits and better quality of life for the staff. With only one hospital, it’s tough to do health insurance and retirement and all that stuff for these folks. So if we can align all these pieces and fit them together, you can provide a lot better for your staff.”

Initially, SVP used the connections that Price and Whitworth had developed within the industry to discover clinics that were interested in selling. But as the company has expanded and become better known, many of the new acquisitions have been through word of mouth, with clinics approaching SVP. Whitworth says veterinarians are attracted to SVP because the company does not try to make new acquisitions fit into a single corporate mold.

“The main focus from day one when we started was maintaining a clinic’s culture, ” says Whitworth, who grew up on a cattle farm in Madison. “Every clinic operates a little bit differently, and the clientele is a little different. We don’t expect how a practice is run here to work in every place. So we’re very flexible about maintaining that community involvement and culture that makes that hospital successful.

“We want vets mentoring vets. We don’t want people in suits and business guys trying to tell a vet how to practice medicine. So we don’t have a particular way that we have to do it. We’ve adjusted our guidelines along the way. We really invest in people, and by doing that we can maintain that culture.”

Lakeman agrees. An attorney who was roommates with Price at Auburn University, Lakeman was brought on to help oversee SVP’s expansion. As Lakeman explains it, SVP wants a clinic to stay largely unchanged after an acquisition, which is why the company insists that the owner continues to practice at the clinic for a minimum of 18 to 24 months.

“It’s kind of a deal-breaker for us if they want to just hand us the keys and we hand them a check, ” Lakeman says. “They’re still the main presence at the hospital, still one of the main revenue producers. So we need them to stay on. And typically they want to stay on and shepherd through the transition. They’re worried about their staff and their clients. They’ve been treating some of their clients for 30 years. They’re a big presence in the community, and we want that to continue.”

This formula appears to be working so far, considering how quickly SVP has grown. The company now has more than 20 employees at the corporate level, and is in the process of moving from a 2, 000-square-foot headquarters to a space approximately three times larger. But Price says he wants to make sure SVP never loses the personal touch that helped entice veterinarians to sell their clinics to the company in the first place.

“We’re the anti-corporate corporate, ” Price says. “We don’t talk like those companies and we don’t act like them. When you have a doctor who has been seeing the same people in the same community for 30 years, anything we do to damage that relationship is detrimental to the business. So we handle that with kid gloves.”

So while SVP might own a clinic, it doesn’t try to put new acquisitions on a leash.