Things were going pretty darn well for Tara and Tim Essary and their 4-year-old Cahawba House restaurant not far from the Capitol in Montgomery. They served their trademark “Bama Bona Fide Southern Cuisine” at breakfast and lunch for people who lived or worked nearby and for groups of tourists coming to town to soak up Alabama history.

“We were having one of the best months at the first of the year,” Tara recalls. “And then everything hit.

“I don’t know whether it’s just that we were so focused — but when everything happened it happened so fast. Our sales plummeted 80 percent in a week.”

After the initial shock, the brother and sister restaurateur pair started thinking beyond the tabletops.

“We prayed about it,” Tara recalls. “What can we do with this dining room that’s empty?”

As they listened to news reports of people facing empty grocery shelves and local suppliers unable to get their goods to market, an idea began to germinate.

“First we called the health department,” says Tara, “and asked whether we could open a market in our dining room space.” They also checked in with zoning officials and suppliers.

Surprisingly, she learned that suppliers still had some of the items in short supply in bigger stores, like cleaning supplies.

Local farmers, who had been supplying their kitchen in normal times, were happy to have a substitute market. That also brought in a variety of other local products — soaps and such.

Last weekend, Tim and Tara and other family members moved the tables and chairs out and replaced them with refrigerated cases and shelving — opening back up as a market on Monday.

But there’s still prepared food to be had.

Chef Lashonda King is still crafting some of the Cahawba House favorites — meat loaf and fried chicken and herb roasted chicken, mashed potatoes, mac and cheese, collard green, fruit cups, salads and more. The difference is that instead of coming in and visiting while they eat, diners pick up portions packed to go.

The hours are new — 11 a.m. to 7 p.m. daily — so there’s no more breakfast, but there are sandwiches at lunch and even frozen casseroles to supplement the dinner options.

It started slow, but now the family-owned market and take-out site is taking to social media to promote this new version of their business.

You can check out the menu at cahawbahouse.com, order by phone and pick-up at the curbside. And the Essarys are hard-at-work developing online ordering.

So far, customers like it, she says. One of her hardest jobs is encouraging people who would love to stay and visit that social distancing is vitally important.

“It’s weird to ask people to social distance,” she says, “but we have a space that people are still coming in, so we have to do our part to keep this virus down.”

And that’s especially hard for her: “I’m a hugger!” she jokes. But she’s learned to restrain herself and now works to make sure others remember to keep their distance, too.

“It’s been really good and uplifting to know we’re providing a service for our community.” 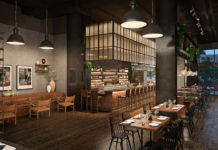 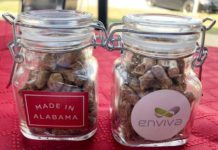 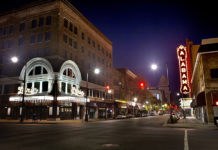