It is not uncommon for Greg Morrow to travel from Alabama to Alaska, with a stop along the way in Wyoming, all in a single day. In fact, sometimes he makes this journey in a single hour.

OK, obviously Morrow doesn’t actually traverse these vast distances so quickly. Rather, as the owner of Southern Custom Exhibits, he oversees the creation of displays that begin at the company’s 35,000-square-foot facility in Anniston and end up at museums, parks and memorials throughout the United States.

So in one room, Morrow observes newly created exhibits heading to the Cook Museum of Natural Science in Decatur. Then in a nearby space he finds himself gazing upon displays destined for majestic Grand Teton National Park in Wyoming. A few steps away, it’s the beauty of glacier-filled Kanai Fjords National Park in Alaska.

After 30 years in the business, Morrow says SCE averages approximately  $5 million a year in sales, spread out over 60 to 70 jobs, both large and small, local and national. This has included exhibits for the Thomas Jefferson Memorial in Washington, D.C., Grand Canyon National Park in Arizona and the Flight 93 National Memorial, near Shanksville, Pennsylvania.

“We have our footprint all across the country,” Morrow says. “We feel like we can compete with anybody when it comes to doing this type of work.”

It is work that began with a college project. As a senior majoring in business at Jacksonville State University in 1988, Morrow had to develop a detailed plan for the creation of a small business. Meanwhile, his father, Elvin Morrow, had long dreamed of starting his own company, after spending years working as a designer and builder for various fabrication companies.

“So we sat down and he helped me with the numbers, and I wrote the report,” Greg Morrow says. “After my father saw it, he decided to execute that plan. So his dream and my report led to this company.”

Morrow joined his father at the new company in the early 1990s, and his mother was brought on to handle the finances. Elvin Morrow had made enough contacts over the years that SCE quickly gained plenty of work, though much of it involved creating temporary exhibits for business trade shows.

“Those are quick builds set up for just a few days, so the craftsmanship wasn’t at the same level that we wanted to do,” Morrow says. “We were more interested in the level of quality that it takes to build a museum exhibit. That’s more like making an heirloom piece of furniture.”

SCE took the first step in that direction with a job refurbishing barracks for the U.S. Army. That led to an offer to create displays for a small museum for the Army Corps of Engineers. Soon afterward, SCE signed a contract with the National Park Service to renovate several existing exhibits, then later to create new ones.

“We just started clicking off a lot of jobs, and they kept getting bigger, with more value and national profile,” Morrow says. “By the late ’90s we were completely out of trade shows and just working on museum exhibits.”

That works continues to this day, with Greg Morrow taking over as president and CEO following his father’s death in 2007. Morrow says the company is steadily busy and never has to pursue clients. “If you do quality work, then having repeat business, and new business will take care of itself,” he says.

SCE has expanded to 25 employees, and Morrow says they include highly skilled workers in welding, fabrication, woodwork, molding and finishing. He says the company takes pride in doing almost all these jobs in-house, with few sub-contracts.

“That enables us to keep control of the quality, schedule and cost,” Morrow says. “Over the years, we’ve kept learning more and more skills. Being one company that can do all these different things in one building sets us apart.”

The biggest change over the years, Morrow says, has been the move toward electronics and interactive exhibits. When SCE began, most museum displays consisted primarily of written descriptions and photos. An elaborate exhibit might have had some lights and flip cards. Now, visitors expect to be entertained as well as informed.

“We used to build a lot of static exhibits, with screen printing and hand lettering,” Morrow says. “Now everything has bells-and-whistles. They’re so technical, with touch screens and holograms. What we used to do was all flat. Now everything is three-dimensional. You can feel the texture and dimension. I couldn’t fathom all that 30 years ago.

“We’ve been pushed on every project to learn new things and train ourselves. We’ve had to take classes. Our technical guys spend a lot of time learning these new devices and techniques so we can implement them into the exhibit. Plus, everybody wants something different that’s bigger and better. So a lot of times we’re doing something we’ve never done before. We’re always out on that edge. It can be a little scary.”

The final product, however, can be extremely rewarding, whether it’s the emotional connection of a memorial, such as Flight 93, or the sheer fun of an interactive children’s museum.

“You work on some of these projects for several months and really get caught up in them,” SCE Production Manager Levi Raven says. “Then when you’re done, you get to stand back and look at it. That’s when you realize you did something really important or interesting, and people are going to be able to enjoy it for decades.”

How to Build Museum Exhibits

Creating a museum exhibit begins in much the same way as the construction of a house or office building, with a detailed plan. Since the exhibit will be constructed in Anniston and then transported to the site, Southern Custom Exhibits needs meticulous information about the other space, including overall square footage, ceiling heights and available electrical sources.

Then come details about the exhibit itself. SCE owner Greg Morrow says some clients know exactly what they want and simply hire SCE to create it, while others literally have nothing more on hand than the name of the museum or park.

“So we get into subject matter, where we talk about themes and what points they want to get across,” Morrow says. “Who’s the target audience? The age groups? How many people are they expecting a year? All that goes into how we design and build the exhibit.”

SCE’s design team then begins sketching out ideas for how each exhibit will look, along with the accompanying written / audio narrative. An outside expert on the subject matter of the display might be brought in to offer advice. Details such as color schemes are gradually added to the plans. Once the client approves the final designs, then SCE begins production.

“We’ll start laying it out and building things full size,” Morrow says. “We’ll typically set up the entire museum in the shop, with raw plywood, steel and plastic, and paper graphics taped in place. That way the client can walk through the entire thing and suggest any changes before we paint and laminate everything to a finished state.”

The final product is then transported to the site by BR Williams, an Oxford-based trucking company that has worked with SCE for three decades. “They have gotten us into some crazy locations with the national parks we work with,” Morrow says.

Depending upon the size of the job, four to 15 SCE employees will also make the trip and install all the exhibits, a process that takes up to two weeks. This includes a day or two of training the museum / park workers on how to operate and clean the displays.

“Then we get a group picture,” Morrow says, “and everybody goes home to start working on the next job.” 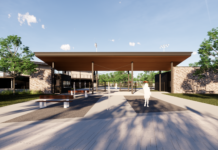 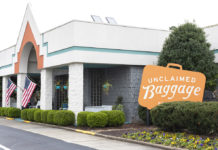 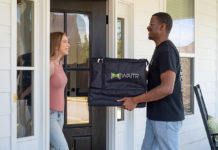