Home People Managing a Portfolio of the World’s Best Wine

Surely it’s the ultimate retirement dream — traveling the world, sipping fine wine, experiencing other cultures, making lasting connections. But for Gregory Doody, president and CEO of Vineyard Brands, it’s the career that lured him back from early retirement — again. And all of that traveling and wine sampling are hard work, something he’s accustomed to.

Doody’s career path has not been conventional. Now in his early 50s, the Birmingham native has carried a long line of titles in his career — attorney; CPA; partner with Balch and Bingham based in Birmingham; executive vice president, general counsel and secretary of HealthSouth; executive vice president, general counsel and secretary of Calpine, and executive vice president of Charter Communications. It’s evident that he’s mastered the intricacies of restructuring companies during difficult times, but he can’t get the hang of retirement. It just doesn’t stick, which is why his latest job title as entrepreneur and certified sommelier occupies him now.

Earlier in his career, when Doody was with Balch & Bingham, his work as an attorney was diverted to corporate restructuring when rehabilitation giant HealthSouth was exposed for wrongdoing on a grand scale. Sorting through the aftermath of the firestorm in 2002 and beyond, Doody helped to keep the company alive, saving thousands of jobs. After the resolution, he considered retirement, but there was more restructuring work to be done with Calpine and Charter Communications. It’s not the sort of niche just anyone can be plugged in to, but Doody had the skill set to right badly listing ships.

The intensive commitment it takes to determine how to restructure in the face of massive mismanagement might make days seem like months, and months years. Doody again thought it was time to take a step back, and retirement seemed a certainty. But when he decided to attend the esteemed French Culinary Institute in New York to occupy his suddenly free time, he discovered a natural affinity for the world of wine.

“The thing I fail at most is retiring,” Doody says. “I thought about getting into the food and wine business, but being a chef is for someone much younger than me. I took a 12-week intensive sommelier training course.”

The master sommeliers recognized a fellow purist and saw a new direction for his career  — moving wines from point of origin to fine restaurants and retailers.

Intrigued, Doody arranged a meeting with Jerry Neff, head of Vineyard Brands, an international importer based, conveniently enough, in his hometown and recognized by his culinary colleagues as a top worldwide importer.

Neff, in his 70s and ready to retire, before long offered Doody the leading role in the company.

“At first I said no,” Doody says. “I thought I was ready to retire at last. So my first year was a test. I wanted to see if I wanted to work and if I was a good fit for this business.”

Doody bought in right away on the employee-owned concept of Vineyard Brands, knowing everyone from sales managers to office employees were invested in the success of an enterprise they partially owned. When the original founder, Robert Haas, left to begin a winery in California, he had arranged for the company to transition to the employees through an Employee Stock Ownership Plan. In the late 1990s, the ESOP completed its purchase of the business from Haas.

“They’re literally invested,” Doody says. “Because the wine business is a non-traditional business, you don’t look at ROI. It takes a long time to see growth. You think of it like planting a vineyard. It won’t start to produce wine for three years, and it won’t be in its prime for 15 years. We get to think about business like our wineries think, which is very untraditional.”

Vineyard Brands is something of an anomaly — an acclaimed wine import organization based in the Southeast, where the firm has been located since 1997, after a stint in Vermont.

Doody’s financial artistry has impacted the business and revenue has steadily increased. He attributes that to expanding the knowledgeable sales force and to adding the right wineries to the company’s portfolio. 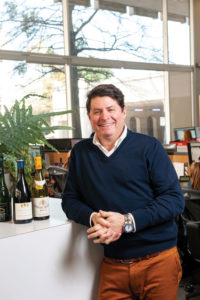 Catching the entrepreneur in town isn’t easy, but between a tasting trip to Germany and a wine fair in Italy, Doody is in Vineyard Brands’ headquarters in downtown Birmingham. From that prime corner, the company represents more than 60 wineries from major growing regions in France, Spain, Portugal, Chile, Argentina, New Zealand, Australia, South Africa, Germany and Italy.

The wine import business is 100 percent relationship and reputation-driven, Doody says, and Vineyard Brands works only with family-owned wineries. From one such winery they may buy 335 bottles a year, and from another, one million cases for distribution.

“It’s all about relationships and all about the wine itself,” Doody says. “It’s a pretty rigid process before we agree to take on a winery. In our business, what we do is curate the portfolio. If we have bad wines in there, we haven’t done our job. If you see ‘Imported by Vineyard Brands,’ that’s a stamp of approval from us.”

With overall imports of more than 10 million cases a year, Vineyard Brands is considered a midsize importer, but its portfolio makes it extraordinary and it covers the entire U.S.

Doody recently re-established the Vineyard Brands’ relationship with the exclusive Château Petrus in Bordeaux, France. Petrus, a coveted brand, was warmly welcomed back to the company, which now has more than 60 employees throughout the U.S. and an office in New York. It’s from the downtown Birmingham office that more than 30 employees handle shipping, accounting and marketing materials.

The wine business, with its long waits for yield and maturity, naturally draws people who are passionate about what they do — “especially the winemakers. If you’re not passionate about it, it doesn’t work,” Doody says. “You can have a perfectly made wine that’s well balanced with good acidity. Technically it can be correct, but it has no soul.”

Doody is finding new challenges that make postponing retirement — again —worthwhile, planning shipments and marketing for new releases to coordinating with sales teams. But any growth is carefully controlled, and his skills as a restructuring master keep him vigilant about how and when to make changes.

Making sure the portfolio is diverse is part of his goal. Vineyard Brands had one Italian wine four years ago, and now boasts five. Doody wants to fill out more of the Italian regions, as well as adding different regions from South Africa, but only when the relationships warrant a partnership.

“We want our portfolio to grow, but we don’t want to be a totally different company that grows exponentially,” Doody says.

The ESOP owns the vast majority of shares, with only two individual shareholders — a national sales manager in California and Doody, who together own 15 percent of the business.

Beyond the business challenge, Doody enjoys the challenge of the wine itself and the friendship of the farmers who grow it.

At the end of the day, it all comes down to taste, Doody says, and you don’t have to be an expert to know the flavors you enjoy.

Vintners have to be grounded, considering the minimum two-year investment in every bottle of wine. Doody says the way the hardy vines grow and the smartest farms are managed have become fascinating aspects of wineries many never consider. Biodynamic soil is becoming more prevalent as farmers avoid adding chemicals and watch as the life takes over the soil.

“The wine is happy when the grapes are happy,” Doody says. “If I see a winery with no weeds and everything looks perfect, it’s probably not as healthy” as one that looks less manicured.

Doody says in a biodynamic approach, the farmer is inviting the life back in.

“The vines are stronger and the grapes better when the plants compete with a few weeds here or errant blades of grass there. One farmer in the Burgundy region of France was expanding a cellar and stopped construction when the earth opened to reveal the roots of vines stretching 30 feet deep in the earth around them to find the sustenance they needed to produce the best grapes. That’s a tenacious vine poised to produce a robust grape crop.”

Cara Clark and Joe De Sciose are freelance contributors to Business Alabama. Both are based in Birmingham. 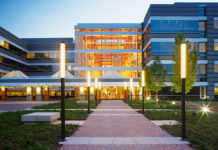