Interstate 565 in the Huntsville area typically sees bottlenecks during rush hour, especially between the city of Madison and I-65. Last year, Governor Kay Ivey announced a widening of the highway to three lanes in each direction. That work has now begun.

The Alabama Department of Transportation (ALDOT) expects the $14.3 million project to be complete by December 17, 2021. It has offered a $1.25 million incentive to Reed Contracting, a heavy construction firm in Huntsville, if the road project is completed 50 days early. This is the first interstate upgrade to be funded by the state’s gas tax increase that went into effect last year.

The project will take place in the Huntsville city limits in Limestone County, starting just west of County Line Road and continuing to I-65. The construction zone will be slightly more than seven miles, and its initial work will include some nighttime tasks, such as setting concrete barriers and shifting traffic lanes on the eastbound roadway.

During the project, two travel lanes will remain open in each direction.

The construction crews will be taking advantage of I-565’s initial construction design, which included wide shoulders and bridges.

“I kept looking at it, and I thought, ‘That shoulder is 14 feet wide,’” said Curtis Vincent, the chief engineer of ALDOT’s Northern District, who studied the project for years. “It’s a sufficient shoulder we can utilize, because it’s got the buildup like the mainline. We wouldn’t have to reconstruct it to put traffic on it.”

A key to the project was the bridges — were they wide enough for a third lane?

“Those bridges are 40 feet [wide], from wall to wall,” said Vincent to al.com. “Even if you had three 12-foot lanes, that would allow you four feet for a shoulder. It’s still going to be safe. The lane width will be the same. We may have two 12-foot lanes and an 11-foot lane across the bridges and a minimal shoulder. But people drive across bridges every day that have less than a two-foot shoulder.”

The gas tax that went into effect last year, named the Rebuild Alabama Act, included a 6 cent per gallon increase for 2019, a 2-cent tax increase for 2020 and another 2-cent increase that goes into effect in October 2021. The funds generated by the tax increase are used to help fund an annual grant program for transportation projects. 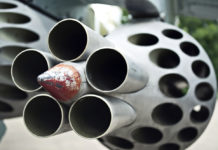 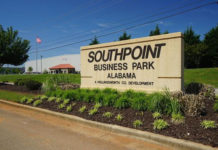