The same could be said for old military ships, such as the former U.S. Coast Guard Cutter Bramble, stranded in Mobile in a dry dock at Alabama Shipyard.

The vessel, long since decommissioned from military duty, has been “arrested” — the maritime law term for a ship that has been prohibited from traveling while courts sort out issues of ownership.

The 180-foot U.S. Coast Guard Cutter Bramble was commissioned in 1944 and participated in the first test of an atomic bomb at Bikini Island Atoll, in 1945. In 1957, it was one of three Coast Guard cutters that were the first American ships to circumnavigate the North American continent by breaking through the ice along the northern shore of Canada.

A plan to re-enact that 1957 voyage in 2019, the 75th anniversary of the Bramble’s launching, proved too ambitious. It was the dream of Tom Clarke, president of a healthcare company in Roanoke, Virginia, who bought the ship in 2018.

The vessel was in dry dock in Mobile for renovation by Epic Alabama Shipyard when repair bills became part of the uncollected assets of parent Epic Companies, a Houston maritime company that declared Chapter 11 bankruptcy in September.

And bobbing somewhere in the flotsam of Charter 11 assets and debts is the mighty Bramble.

A story in Marine-Executive recently reported that the Bramble will be on the auction block on Nov. 6 “on the steps of the Mobile courthouse.” But nobody with Alabama Shipyard or the federal or state courts in Mobile know of an auction, which may be an outcome of a Texas court.

The Bramble now sits at the Alabama Shipyard, which was spun off from parent Epic and is now doing business, under new owners, as Alabama Shipyard. The shipyard began business as Alabama Dry Docks and Shipbuilding, overhauling ships for World War II and after. It later became Atlantic Marine, then BAE Systems Southeast Shipyards Alabama, which Epic bought in 2018. 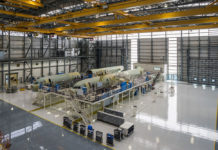