According to the World Bank, about 1.7 billion people across the globe have no access to a financial institution. In the developing world, opening a bank account can be the first step out of poverty, and for many of these unbanked individuals, the answer is at their fingertips.

“One of the big obstacles there is lack of provable identity,” says Chace Hatcher, founder and CEO of Diamond Fortress Technologies.

Based in Birmingham’s Innovation Depot, Diamond Fortress has developed authentication and security solutions via fingerprint identification. ONYX, the company’s groundbreaking software, allows the clear and accurate touch-free capture of fingerprints through a mobile device’s camera.

Diamond Fortress provides clients with an ONYX software development kit that can be integrated into their own applications. The skilled team of nine tech professionals exports its services to more than 200 countries, including Australia, Mexico and Pakistan.

After taking a high-contrast photo, the software sends the image to a remote server for authentication.

“When I started this, everybody thought it was impossible,” says Hatcher. “So that’s what we put a patent on. It allows you to distribute the ability to do this without any additional hardware beyond the phone itself.”

Originally from Florida, Hatcher studied law at Cumberland in Birmingham. There, he started several businesses in various fields, from business consulting to staffing. The serial entrepreneur also served in the U.S. National Guard as a platoon leader and taught himself engineering. Around 2011, while in business consulting, he was introduced to the emerging world of digital identity management.

“The process then was broken,” he says. “I wanted to develop a software platform so that people could be in charge of their own identities in a proven, trusted way without compromising themselves. I knew biometrics would be a part of that. Fingerprint identification was very well trusted. It’s been established as a solid solution for years.”

Hatcher recalls that existing print scanners were cumbersome in the field. “Fingerprint biometrics had a logistics problem because you had to distribute a piece of hardware to make it work,” he says. “I started investigating what device was becoming ubiquitous at the time — the smartphone.”

Diamond Fortress’ solution was software that could be integrated in an existing device to make use of its own camera, no peripherals required. The absence of hardware also keeps the user cost relatively low. Generally, after a one-time fee for the development kit, customers pay according to each transaction authorized through the software. Other pricing models offer per-device or per-rooftop payment options.

While researching the matter, Hatcher encountered a company that was working on touchless optical-based biometrics in Huntsville. He licensed their technology to modify it for use in touchless fingerprint capture. Diamond Fortress was formed in May 2012, and by February 2013 the company was focused on monetizing their ONYX technology.

Securing funding was a challenge in 2012, as Alabama was hardly on the map of many venture capital investors. “None of the excitement around startups in Birmingham was happening yet,” Hatcher says. “There were not a lot of dollars from traditional VC investors, so a lot of our funds, about $3.2 million, came from high-net-worth individuals.”

Right out of the gate, the company had to settle a litigation issue to protect its IP. Although the pre-case settlement was favorable, it cost them a substantial amount of their initial investment dollars.

While Diamond Fortress did draw interest from some Silicon Valley investors, the potential financiers stipulated that the operation should be moved to California. “That was non-negotiable for us,” Hatcher says. “We like Birmingham. It’s our home. The costs are so much higher out there. You can do the same thing here with the same quality of engineers for a fraction of the cost.”

By 2014, the company’s need for new office space brought them to Birmingham. “We came down here to meet with Devon Laney of Innovation Depot,” Hatcher says. “We liked what we saw, and we’ve been here ever since. It’s a great place for tech companies.” 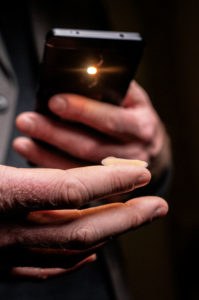 The team of engineers undertook thorough research and development in 2014, troubleshooting how users could properly capture their fingerprint in variable field conditions. Much of 2015 was dedicated to learning the market. “We tested hard on government and law enforcement areas,” Hatcher says. “There’s a lot of red tape and a lot of certification of devices around that industry.”

Much of the company’s success during this time can be attributed to a tight but dynamic team. “Everybody that works here is well-skilled across a wide array of things,” Hatcher says. “Every one of us can write code, but Mac Funchess for example, is much more than our marketing director. He’s the chief of Getting Stuff Done.”

Funchess was working as a filmmaker when Diamond Fortress brought him in to make promotional materials for the company in 2013. “I saw a lot of things that needed to be done, so I started helping with marketing,” he says. “After a few weeks, they invited me to stay on.”

While Funchess handles the company’s marketing duties, he also has been instrumental in the software development itself, painstakingly training ONYX’s AI to identify real and fake fingerprints, bare or covered, live or dead.

The technology has proven extraordinarily useful in enabling banking and financial services in the developing world. “We saw that ONYX had potential in the financial inclusion market,” Hatcher says. “Lack of banking infrastructure is a big problem. There is a biometric infrastructure, but nothing for banking.”

In many developing countries, an individual’s legal identity is linked to biological data such as their fingerprints. Programs like India’s Aadhaar ID system build and maintain vast databases of residents’ information, accessible for authentication with the government. “What makes ONYX so powerful there is that they already have a fingerprint database,” Hatcher says.

In 2016, Paysys Labs in Pakistan called on Diamond Fortress to deploy its technology in the nation’s market to help verify IDs for the central bank. The service was entered into a grant program that was affiliated with the Bill and Melinda Gates Foundation. The foundation saw ONYX’s potential and direct contact was eventually established.

In 2017, Diamond Fortress received a foundation grant via DFS Labs for DFT Empower, a wholly owned subsidiary that provides financial inclusion services to nations defined as lower and lower-middle income countries by the World Bank. The grant was renewed last year.

ONYX can be integrated into the mobile banking app of a user or agent. The user can enter their biographical information and pair that with an image of their fingerprint. The info is sent to their national government, which can verify it, or match it against the print on an individual’s ID card. 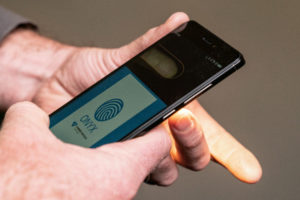 The company also is looking into how ONYX could aid asylum seekers at national borders. “We help refugees coming from Somalia into other countries like Kenya,” Funchess says. “They don’t have identity documents because those may have been destroyed in the war, or children may not have been registered with the government yet. We can use their fingerprint to provide them with an identity.”

Diamond Fortress is on track to extend its reach in 2019. By the second fiscal quarter, they will roll out services with a large bank in South Africa and surrounding countries. “As we grow, we have the ability to provide a service to really big banks with a relatively small footprint,” Hatcher says. “That makes our overhead small and our operating margins much larger. We may pick up more engineers over the next year.”

As their efforts expand across the globe, Hatcher is confident that Diamond Fortress will shine as an attractive acquisition. ONYX has been used for authentication more than 80 million times now, with growth expected as the company enters new markets. The proprietary tech is impressive, and the talent behind it would be an invaluable asset.

“We are the experts at touchless fingerprint biometrics,” Hatcher says. “There’s nobody else out there doing it.”