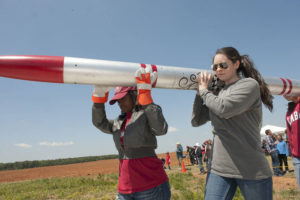 NASA has named the winners of the 2020 Student Launch competition, in which 54 teams competed in building, testing, flying and perfecting rockets.

“This year’s teams showed true innovation and determination as they tackled the new payload challenge and the unconventional methods we had to employ to complete the competition,” said Fred Kepner, an education program specialist and lead for Student Launch at NASA’s Marshall Space Flight Center, host of the competition.

Taking the top spot was Vanderbilt Aerospace Design Lab from Vanderbilt University in Nashville, which has won for a seventh time in eight years. Among the top 10 in the college/university division were the University of Alabama in Huntsville, coming in third, and Auburn University, coming in seventh.

The competition is open to middle school, high school, college and university teams from across the United States. Students must build a high-powered amateur rocket carrying a complex payload, and it must fly over 4,000 feet above the ground. The rocket then must descend and land safely before its scientific or engineering payload can begin its work.

Teams earn points for progress and successes during the eight-month competition, and the team with the most points wins. Awards are also presented in eight categories.

The University of Alabama in Huntsville took first place in the Safety category, which is awarded to the team that most successfully maximized safety and science value in the design.