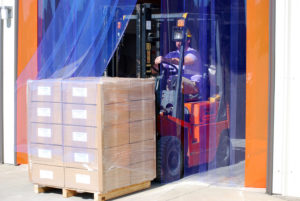 Extruflex, a maker of flexible vinyl products like the heavy clear strips that keep the weather outdoors in an open doorway, opened its third manufacturing facility Monday in Birmingham.

Based in France, the company also has plants there and in China.

The company was founded in 1962 and had expanded across Europe, with sales and distribution in the U.S., China and South America. In 2003, it opened a second manufacturing plant in China to serve the Asia-Pacific region.

Shane Solomon, a Birmingham native, created a joint venture with Extruflex (France), and brought the European product to market here in 2011 — and the North American operation quickly ranked as the company’s fastest growing subsidiary.

“Our team had a specific goal in mind as we worked to grow the company and its customer base: We wanted to manufacture these products here, in Alabama,” says Solomon, a veteran of the extruded vinyl industry.

After creating a manufacturing facility here this year, the firm brought over workers from the French factory to help the Birmingham workers hone their technic. Solomon says his team of 16 workers enjoyed the opportunity to interact with their French colleagues.

Beyond the pleasant cultural interchange, “It’s important that we can transfer the knowledge that our French team has developed so that we can make the same level of quality products,” says Solomon.

Monday, the plant at the Pelham-Hoover border, opened for full production.

It’s not a labor-intensive operation, Solomon said. “One person can make 8,000 pounds of product during a shift.” But he still expects his crew to grow to perhaps 25 workers.

Vinyl strips are used for area separation and environmental control, says Solomon. Often used in refrigerated areas or other industrial and distribution facilities, they save energy while keeping dust, pests and insects out.