When Jodi and Brian Harsany needed a name for the restaurant they wanted to open in Orange Beach, the answer sat right at their feet. Literally.

“We decided to name it after our dog, Cosmo,” says Brian Harsany, part owner of Cosmo’s Restaurant & Bar, alongside wife Jodi. The popular eatery opened its doors in 2006, and today, the 15-year-old lab mix Cosmo can rest easy, knowing that his name has become synonymous in Orange Beach with consistency, professionalism and downright delicious food.

Brian sits at a table inside the playful restaurant, among its orange walls and a collection of paintings portraying coastal scenes and, in one instance, a tuxedo-wearing pooch. What began as a single restaurant on Canal Road has grown into what is now known as Cosmo’s Courtyard, a collection of businesses that the couple has developed following the success of Cosmo’s Restaurant & Bar. This includes Maggie’s Bottle & Tail gift shop, Luna’s Eat & Drink, BuzzCatz Coffee & Sweets and the popular Magnolia Hall event space.

But Brian doesn’t forget the restaurant that started it all. Recently, Cosmo’s has received its fair share of statewide acclaim. Aside from its banana-leaf-wrapped fish being named one of “the top 100 dishes to eat before you die” by the Year of Alabama Food, the restaurant also was chosen as one of the 12 finalists for “Alabama Small Business of the Year” and “Emerging Small Business of the Year” by the Chambers of Commerce of Alabama. To top it all off, Brian and Jodi were selected as 2018’s Restaurateurs of the Year by the Alabama Restaurant and Hospitality Association. 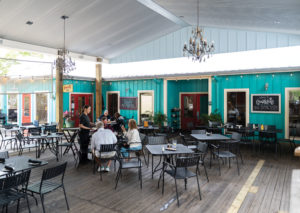 “But that’s what the team has done through the years,” Brian says. “Whether it be the bartenders, the bussers, the hostesses, the servers, the cooks, the dishwashers, the management. It’s everybody working together as a team that creates a product that people appreciate.”

A Tallahassee native, Brian entered the restaurant industry at a young age, clearing tables and washing dishes throughout high school. After studying hospitality administration at Florida State University, he worked a stint at Ralph & Kacoo’s in Baton Rouge before eventually moving with Jodi to Orange Beach, where he managed Bayside Grill at Sportsman Marina for more than 10 years. He then entered into a partnership that ended after just seven months and began looking for another venture.

“I didn’t have the next plan mapped out in my mind. I just knew something would come to pass,” Brian says.

The notion of a place like Cosmo’s had been evolving between Brian and Jodi for quite some time.

“The whole concept was to create a restaurant where we would also love to dine,” he explains. “We thought that if we did that, then there would be enough people who would like the same things: a nice, cozy atmosphere with great food, everything made from scratch, and a wide array of food from which to choose.”

As Brian points out, the canine concept has contributed more than just a fun name. “A majority of people do like dogs,” he says. “And by naming it after a dog and not associating it with a type of cuisine or a country, we weren’t tied in. So we could make anything and put it on the menu, and you can’t argue that it doesn’t fit.” That’s why Cosmo’s is able to serve everything from sushi, steak and pasta to po’boys, sandwiches and seafood. And the best part is, they do it all so well.

“When you go on vacation with family to the beach, and you’ve got a group of 20 people,” says Executive Chef Rob Benson, “somebody wants sushi, somebody wants pasta. With the menu offerings that we have, we’re able to capture those groups of people, because we have such a variety of different items.”

Brian explains that the growth from a single restaurant to what is now Cosmo’s Courtyard is something that evolved out of necessity.

“We keep growing and changing as we need to,” he says. “In March of 2010, we opened up Maggie’s [Bottle & Tail] because it was an opportunity to sell our merchandise, and it also provided people with something to do while they were waiting for a table.” Maggie’s was named after — you guessed it — Brian’s and Jodi’s Bluetick hound.

As patronage increased, the couple purchased a neighboring lot to create more parking spaces. With four acres to spare, they decided to develop what is now Luna’s, BuzzCatz and Magnolia Hall. And while much has changed around the original restaurant, the soul of Cosmo’s remains the same.

“It’s very difficult to change any menu item now because if you take one off, you hear about it for a good year,” Brian says with a laugh. 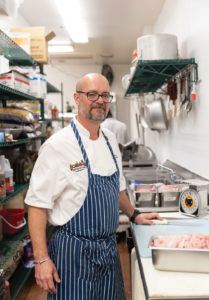 “We’re fortunate in that we have staff who have been with us for a number of years and know what’s expected,” Benson says. Benson himself joined the Cosmo’s team in 2007 after attending culinary school in Portland, Oregon, and working in restaurants throughout the Southeast.

“We have access to some of the best fresh seafood in the country,” Benson says. “Gulf fish, Gulf oysters and Gulf shrimp I think are right up there with the best of what’s available anywhere else. So we try to highlight those things in our dinner specials.”

The key to his kitchen’s success? “Hard work,” he says. “This is not the kind of thing that you can do halfway.”

Brian couldn’t agree more. “We always concentrate on the details and try not to let anything slip through the cracks, whether it be back of the house or front of the house.” For current and potential small business owners, he offers a few pieces of advice.

“Make sure you’re doing what you’re passionate about,” he says. “Never rest on your laurels. Always strive to do better and reach a new goal.”

At Cosmo’s, that vision has translated into a local business that operates under a corporate structure, 80 employees strong. “The idea was to take not only the positives from mom and pop operations but also to incorporate the structure you’d find in a corporate setting,” Brian says. This has allowed Brian and Jodi to offer competitive employee benefits while creating a reliable management structure that has facilitated the growth of Cosmo’s Courtyard.

As they gear up for another busy summer season, the chefs and servers at Cosmo’s keep their eyes on the prize.

“It’s deeply satisfying to run a smooth service,” Benson says. “When people are excited to come back and are looking forward to their next visit, then you’ve hit all the marks.”

Breck Pappas and Todd Douglas are freelance contributors to Business Alabama. Pappas is based in Mobile and Douglas in Fort Walton Beach. 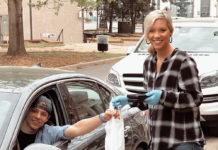 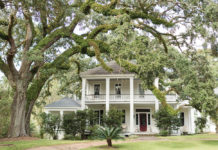