As a college student, Missy Mercer watched, enthralled, as French chefs diced and sautéed their way to superb fare with flair on PBS television’s Great Chefs of France, a fascinating diversion for someone whose studies were all about finance. Mercer’s pre-occupation with the art of gourmet was no passing fancy. It was a recipe for success.

Mercer has proven herself a skilled chef with a head for business and the determination to follow her passion for food from Auburn University’s campus to the West Coast and eventually back home to roost in Montgomery.

In 2004, the chef-turned-entrepreneur and her husband, Browne, purchased Tomatino’s and Café Louisa, then located in the Fairview area, not with a sense of complacency, but with a desire to see the sister restaurants grow.

Mercer has succeeded masterfully, as evidenced by the satisfied customers who regularly return for the hand-tossed pies or the baked goods and barista-made coffee drinks and smoothies. Cast an eye over the menu, and it’s clear this is not your average sandwich shop. An Italian club includes ingredients like capicola ham and mortadella, and you can choose a Chai Bella for dessert — that’s vanilla gelato with chai and honey. These are the flavors of a sophisticated palette influenced by a soupçon of Italian heritage and a dollop of French training.

“My junior year at Auburn, I told my mother I wanted to go to culinary school, ” Mercer says. “I toured California Culinary Academy in downtown San Francisco, and once I got out there and saw it, I immediately knew what I wanted to do.”

Mercer began the two-year culinary school program on the heels of her undergraduate work. She immersed herself in the experience, from the farmers’ market to fine dining.

“These fresh foods are grown in California, ” Mercer says. “They’ve always known farm to table, and that’s how it should be. All of these chefs are cultivating vegetables and cooking seasonally.”

Mercer’s moniker as chef is not one to be taken lightly. She trained in the art of cordon bleu in San Francisco, a city with the highest number of restaurants per capita in the nation, before going to work for one of the most exacting stewards of flavor and finery, Spago, a standout entry on her impressive resume.

While at culinary school, she was mentored by Peter Reinhart, a master of all things bread, who won the James Beard award for sourdough and has written numerous books. Mercer worked on developing products with him after class and collaborated on creating an organic pizza dough recipe for wholesome brand Amy’s Kitchen, based in California.

Mercer spent a stint working in fine restaurants in Telluride, Colorado, after culinary school and found her love of the art of baking rising with the tenacity of leavened bread.

“I can do pretty much anything in the kitchen, but baking is more challenging, ” Mercer says. “You’re working with much more volatile ingredients. If you learn how to cook a steak medium rare, you can cook it that way every time. Baking, especially bread, is much more challenging.”

It was that quest for challenge that took Mercer from Colorado back to the San Francisco area, where she worked in the pressure cooker environment of Wolfgang Puck’s Spago. As chef to the glitterati, Puck’s reputation for excellence and demanding standards is legendary.

“People tell you after you work in his restaurant, you’ll never want to go to work for anyone else, ” says Mercer, who spent two years at the establishment. “He’s so organized and meticulous.”

In a world dominated by male chefs, particularly when she was in California in the ’90s, Mercer found herself breaking barriers to prove herself at Spago.

“Wolfgang Puck has executive chefs who run his restaurants, ” she says. “When a woman walks through the door of the kitchen, they want to put you on pastry or on the salad. They don’t want to put you on sauté. I would come in an hour early or two hours early off the clock and worked hard.”

She earned her spot, proving her capability and tenacious spirit. When her mother’s best friend decided to open a fine-dining restaurant in Montgomery, Mercer agreed to be head chef, but again found herself craving the complexity that comes with baking. 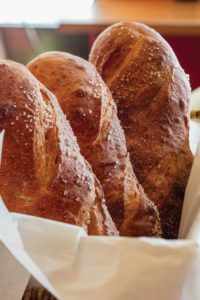 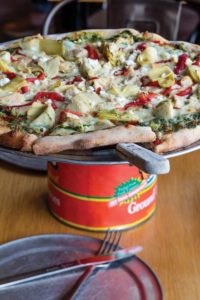 It wasn’t long after her return to Montgomery that Mercer was approached about buying Tomatino’s, a popular pizza restaurant established in 1995. Not one to do things by halves, in 2004, Mercer got married and bought the business, two life-changing events in one year. The nine-month business sale negotiation process was an ordeal, and Mercer changed her mind about the purchase more than once before the final terms were negotiated.

“My goal was to keep Tomatino’s the same, ” Mercer says. “I wanted to polish up the quality and consistency. The café was a bonus. I bought the two with the café in mind to play with, and that became my baby. From when I purchased it in 2004 to 2006, we tripled in sales.”

Mercer opened a full bakery in conjunction with the café to serve the local need for cakes and baked goods, expanding the square footage and serving cookies, brownies, muffins and an array of treats.

When she had twins, her work schedule of 4 a.m. to 7 p.m. was not sustainable.

“I thought ‘There’s got to be a better way, ’” Mercer says. “After seven years, I infused the bakery back into the café, which was the best thing I’ve done personally and professionally.”

The same drive that led her to become the only female on the hot line in Spago keeps both restaurants on the front burner. She’s not only baking and managing, she’s washing dishes, running food and writing menus.

“I feel very lucky to have a lot of people who have worked here over 10 years, ” she says. “I can’t do it without them. They are definitely the backbone of the business.”

The move to a new location, in the heart of historic Cloverdale, allowed Mercer to consolidate the locations and manage the quality and constancy from pizza dough to gelato. The move also increased sales volume 40 percent in three months in the nearly 5, 000-square-foot space.

“The volume of desserts was astronomical, ” Mercer says. “We have not changed our menu at all, except to add an extra sandwich of the day. Our desserts are the same, but with more visibility, the sales are amazing. The move was the best.” 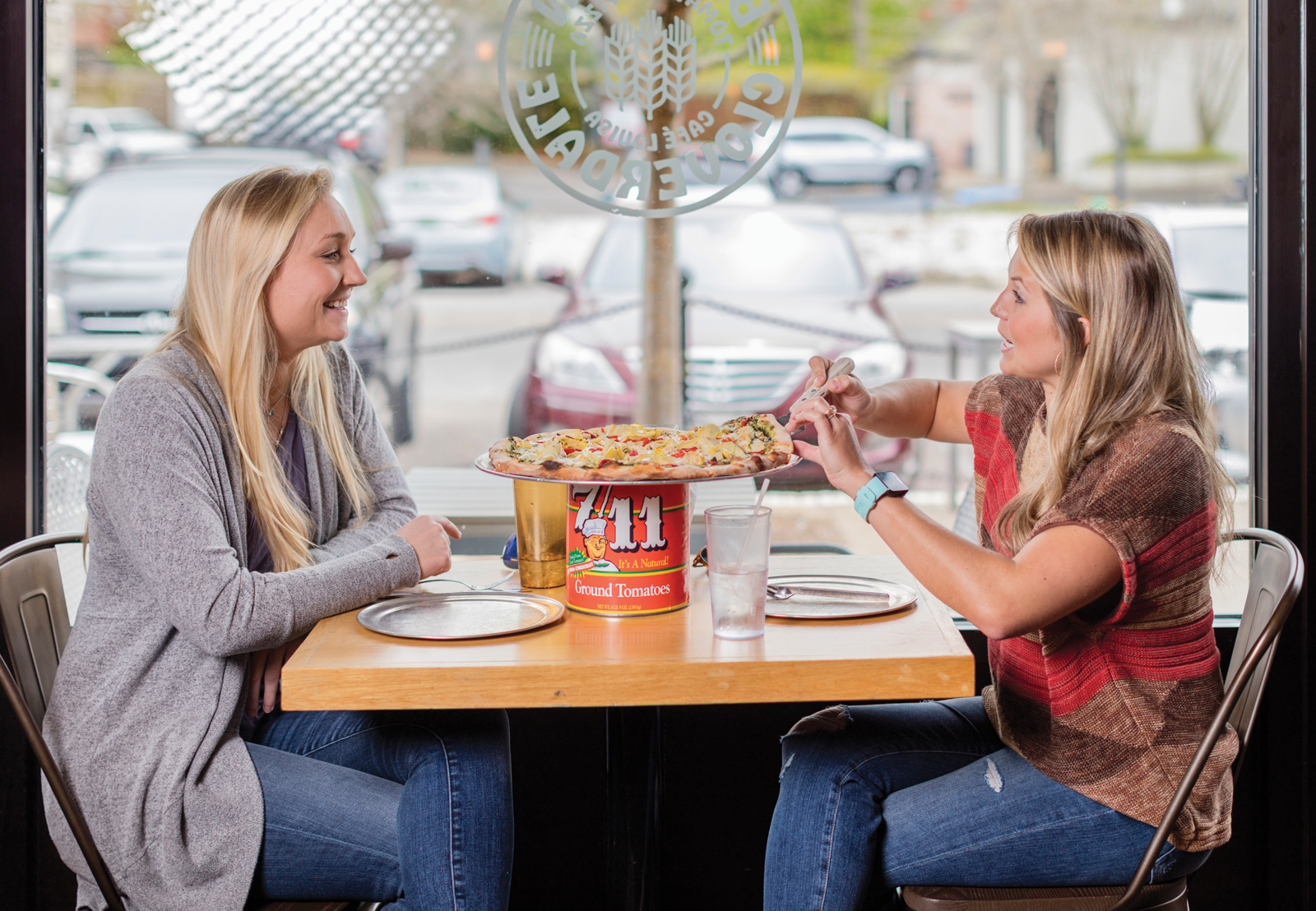 Deciding to move the business from Fairview was another tough decision Mercer took on while simultaneously moving her family, with twin girls, to a new home.

“I was trying to make a good business decision for me, my family, the employees, ” Mercer says. “I was making all these decisions, and I needed to factor in the neighborhood I loved so much. The landlord here wanted us really badly. He made it very appealing to come to this spot. People over on this side of town tell me all the time how happy they are we are here. The Fairview people have come over here. It was a lot of worry and a huge risk. I had a lot of sleepless nights. A lot of chefs can’t be married and have families, but I’m very lucky with my supportive husband and my go-with-the-flow kids.”

Mercer has proven her versatility as a chef and business owner. When she worked at Spago, where hundreds of food products were moved through an immaculately organized refrigeration system to cooktop to delighted diners, Mercer was in her element. Puck, with a food empire to manage, would visit all of his establishments, spoon in his pocket to taste test at random. And the quality had to be spot on each time.

“I loved it and thrived on it, ” Mercer says. “Everything had to be perfect. Wouldn’t you want to know the people preparing your food are taking the care with raw ingredients? It was phenomenal. I know how to perfectly sear a scallop or cook foie gras perfectly, but that’s not what I do.”

What she does is serve food with passion, and she has that same quality control ethic she admired in Puck, confessing, “I’m a freak about my ingredients.”

Despite higher costs, Mercer believes an investment in top-shelf ingredients pays off in flavor dividends. She won’t substitute such fine products as Plugra butter, Valhrona cocoa, Callebaut chocolate, Grande cheeses and Stanislaus tomato products. Maintaining those high standards in the eclectically styled pizzeria and in her charm-laden café are the things that keep patrons clamoring for more, which is at the heart of Mercer’s boundless enthusiasm as a cook.

“The most rewarding part of cooking is hearing customers say they enjoy something that you put your hard work into creating, ” Mercer says. “That is what drives most chefs to grind it out on a daily basis.”