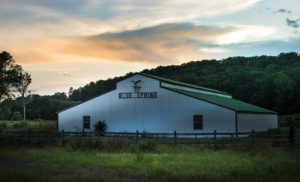 “This is a crowded space, the water isle of the grocery store,” says Cameron Cardwell, founder and CEO of Blue Spring Living Water. “We positioned ourselves as a premium brand, versus the water sold as 24 crinkly bottles in a shrink pack. We’re on a par with Evian, Voss, Eternal, Essentia. Our biggest competitor is Fiji, and we feel our water is superior.”

Cardwell says his confidence comes from the quality of his water.

“It’s a competitive market, but I found out all the test results show that this particular spring comes from a deep aquifer, and, because it takes a long time for the water to get to the harvesting pool, it is one of the cleanest sources in the country.”

Back in the day, Blount Springs, near the Blue Spring operation, was a health resort, drawing visitors looking to soak in its steaming mineral springs. But the source of Blue Spring is different, the Bangor aquifer, which lies deep enough that it has a 300-year turnover — the time it takes to percolate up to the pool from which it is drawn.

“Three-hundred years ago, there were no pesticides,” says Cardwell. “It comes pressing up through the earth pristine, absolutely no contaminates.” 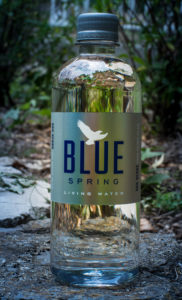 Blue Spring Living Water, says Cardwell, is rich in beneficial minerals, particularly calcium and magnesium. “And most importantly, naturally occurring silica. If there is no silica, the body does not pick up the available minerals, and it takes heavy metals out, flushes those out of the body.”

The FDA is the agency that regulates the bottled water industry, but it simply tests to be sure bottled water meets the same standards as municipal drinking water. Beyond that, quality is a judgment the consumer makes, and consumers are eager to pay top shelf prices for Blue Spring Water. In a short two years, Cardwell has placed his product in 1,000 retail locations across Alabama, including all 67 counties. Blue Spring Living Water is sold at Piggly Wiggly, Publix, Rouses Markets, Winn Dixie, Greer’s Markets, and many upscale, independent markets, including Manna Grocery & Deli, The Fairhope Market and Catherine’s Market.

Quality also has been a judgment that investors have made, with significant capitalization from Birmingham private equity firm Jemison Investment Co.

Jemison’s equity investment in Blue Spring, says Cardwell, “is how we really have been able to accomplish so much. They helped tremendously, put us in a place to position ourselves as a premium water brand.”

Also key to landing on the grocery shelves was the distributor that Blue Spring landed, United-Johnson Brothers of Alabama LLC, a subsidiary of Atlanta-based United Distributors, one of the largest distributors in the Southeast.

“I thought the distribution component would take longer,” says Cardwell. “It was such a blessing to get a distributor like we have. There are not many operations our size with UJB. They had the vision and understood what it means to be part of the local food movement.”

Cardwell started Blue Spring two years ago. Before that he spent 27 years in film production, contracting directly with companies and advertising agencies. He studied broadcast and film at the University of Alabama. After graduation, he traveled, shooting on location – most frequently with utility vehicle manufacturer Altec. He also worked with Vanderbilt Hospital, John Deere Tractor, Auburn University and the University of Alabama.

“I was 49 years old at the time and decided I’d been in motion pictures long enough and wanted to do something different at age 50.

“I was going to do a private label, but I found out the guy operating the spring at the time had, for some reason, pulled the plug. He was operating a business-to-business company, selling five-gallon bottles to businesses. He sold his route and got out of the business.”

Cardwell then went to the landowner, Otis Shedd, who was 95 years old at the time.

“The timing was right for a long-term lease with the family,” says Cardwell. “There are not that many springs left to walk in and take a lease on. In June, 2017, I got the keys to Blue Spring.”

The color of the water in the harvesting pool is inspiration for the spring’s name — a phosphorescent blue.

“You can walk in there with a cell phone and take a picture and that’s how blue the water looks, because of the minerals and limestone,” says Cardwell. “It’s not Photoshopped.”

“We will never have a problem with our natural resource,” says Cardwell. “It sits on a 100-acre farm right outside of Blountsville, with room for expansion and bottling lines.

“The overflow runs out of a spillway down to a creek and ultimately to a bigger creek. The flow we have in this spring is 900,000 gallons a day, and we just did the math on a half liter bottle, and it’s 6.5 million of those every day. The source is solid, clean, 52 degrees year round.”

What led Cardwell from making films to bottling water was a couple years he spent helping a business with distribution of a line of local Alabama products, placing them in independent stores and Piggly Wigglys.

“What I learned about distribution was helpful. I made friends in different retail outlets. If I had not had those outlets, I would not have thought about getting into the business. That’s what got me excited about the prospects.”

With that network and his background in advertising and marketing, says Cardwell, “I felt confident we could build a brand, even before we began bottling.”

In addition to his distribution coup with United-Johnson, Cardwell has also signed with distributor Water Way to deliver five-gallon bottles to homes and businesses throughout most of Alabama, although not yet Mobile.

“Water Way does it better than anybody,” says Cardwell. “Bill Josey has taken that business to a level of customer service that makes it seamless.”

Cardwell says his home state has been his prime focus, but he does not rule out a geographic expansion down the line.

“We have grown by word of mouth. We started out grass roots, make it as a small, local business. We did Alabama right, had all of our processes down as far as the amount we were able to produce to meet our obligations. Because of that approach, in the first three months, because of people telling others about our brand and hearing about it on social media, we couldn’t get it into the stores fast enough, and they wanted it in cases instead of single bottles, and stores would start putting cases on the shelves.”

Blue Spring now comes in BPA free plastic bottles, and a next step, says Cardwell, is to offer it in glass bottles. He is also preparing to introduce a sparkling product.

Cautious though he is about geographic expansion, says Cardwell, “We’re looking beyond Alabama now. We’re dabbling in Tennessee. We’re already in Rouses in Alabama, so we’re talking about expanding to their stores in Louisiana and Mississippi.” 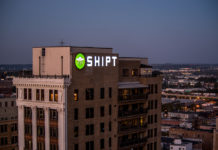 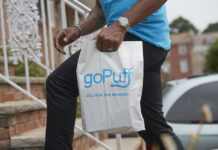 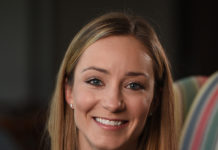