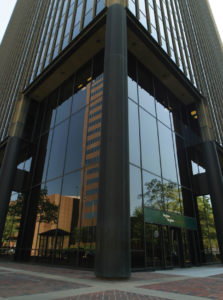 Birmingham-based Regions Financial Corp. was one of the notable declines, down by 3.8 percent.

Other big losers were Citigroup, down 5.0 percent; Bank of America Corp., down 4.6 percent and JPMorgan Chase, down 3.8 percent.

“Bank stocks traded broadly, and in many cases sharply lower, as the spread between yields on 2-year and 10-year Treasurys briefly turned negative for the first time since the financial crisis, fueling fears that a credit crunch and recession were looming,” reported MarketWatch.

“An inverted yield curve refers to when yields on shorter-term Treasury notes cross below longer-term Treasury yields. One of the most closely watched yield curve measures is the 2s-10s spread, as inversions have very often preceded recessions, as it indicates that monetary policy and financial conditions are too tight to support economic growth.”

For banks, an inverted curve can hurt earnings and act as a drag on lending, as the usual practice of taking on shorter-term liabilities to fund longer-term assets, like loans, can start costing banks money.

While Lynch said that he’s not convinced a recession is imminent, given that recent data has showed that the U.S. economy is on “solid” footing, he acknowledged that “recessions can be self-fulfilling prophecies of market sentiment,” and investors should take that risk seriously.