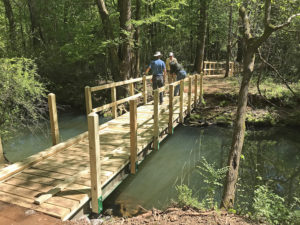 Those who love to explore nature have another opportunity with the opening of the new trail at Joe Wheeler State Park in northwest Alabama. The name of the new 8-mile pathway is the Awesome Trail, literally.

“I told Chad this trail is going to be awesome,” Thomas said, “and it stuck.”

Thomas said the Awesome Trail was constructed through a Recreational Trails Program grant with accessibility for a variety of users in mind.

“We tried to create a trail that could be used by walkers, hikers, mountain bikers and trail runners,” Thomas said. “The biggest consideration for making it compatible for everybody is that it had to be wide enough to support all of those folks. These type trails are wider than most trails people are used to. This allows people to walk side by side, and it has enough room that a biker or jogger could still pass.”

Before he became the trails coordinator, Thomas spent most of his time as superintendent at DeSoto State Park, which has some of the most beautiful mountain scenery in the state, as well as numerous elevation changes. He didn’t expect what he found when he went to Joe Wheeler to establish the new trail.

“The terrain was very surprising,” he said. “It’s a whole lot steeper than people realize. Joe Wheeler had minimal trails. When I started tracking it and figuring out where we were going to put the trail, we ran across several challenges. The terrain going into the Tennessee River and First Creek is a lot steeper than we realized. We had to do a lot of bench cutting, kind of carve the trail out of the terrain to create a level trail bed.

“We dealt with some wet areas where we had to pick the best route to maintain the environment. We also found a tremendous number of ravines.”

Thomas said sometimes the water flow in those ravines is seasonal and can be easily forded. Some of the other ravines had hard bottoms or could be manipulated to have hard bottoms, while other ravines were as deep as 8 feet and couldn’t be forded.

“We wound up installing 16 bridges,” he said. “Seven of the bridges were 20 feet long and two were 30-foot bridges. That was a challenge. We were only able to keep three fords and still keep the environmental integrity of the stream.”

The trail at Joe Wheeler was finished in the middle of April after months of having to deal with the heavy rainfall that kept most of central and north Alabama waterlogged. The new Awesome Trail has received rave reviews since it opened.

“Rain was my biggest problem,” Thomas said. “When the ground is so wet, you’re doing more damage than good.”

Despite the obstacles, Thomas is pleased with the outcome.

“I think what makes this trail so special is that we went to great lengths to bring people to some of the most beautiful parts of the park that we could find,” he said. “Because of the terrain, I had to put in quite a few switchbacks. A lot of consideration went into this trail that I don’t think people realize. You can turn a hiker 90 degrees, but you can’t turn a mountain biker 90 degrees. There are elevation changes you have to consider for all these diverse user groups.

“You don’t just get your hatchet and start hacking out a trail. It’s purpose-built. The combination of all of the users we wanted to serve with this trail made it challenging to build a trail system that a beginner would use but an advanced person would be attracted to also. A happy medium is what we were looking for, and I think we achieved a trail that will make the beginner and more advanced people happy. Nothing about this project was impossible, but a tremendous amount of thought went into it.”

Thomas said the actual construction of trails has advanced dramatically in the past decade. In fact, he was able to become the first trail builder in the state to receive his HETAP (Highly Efficient Trail Assessment Process) certification.

He said the previous trail-construction guidelines fell under a program called UTAP (Universal Trail Assessment Process), which was developed more than 40 years ago.

“You had to have a minimum of two people and four people was a lot better,” Thomas said of the UTAP program. “We had analogue tapes, rolling wheels and analog grade devices. Somebody had a pencil and paper, writing this data down. After all that was done, somebody had to crunch those numbers and assess that trail to provide all the information on how long the trail is, what’s the elevation, what’s the elevation gain, what’s the average grade, what’s the crossflow. The data goes on and on and on.

“I chalk up HETAP as an example of American ingenuity. Somebody computerized it and received a patent. One person can take this HETAP machine and assess a trail. They push a button and all that information is presented in the form of a summary.”

Thomas said the HETAP summary allows the user to decide which trail is best for them.

“What sold me on HETAP was that I could provide the collected scientific data on this trail and let them decide if it’s easy or hard. The benefit is that I can present this information to somebody who has disability, and they can base their decision on what they can do or what they probably shouldn’t do. Information is king. This makes everybody a king. This makes us able to give them the information they need to make their own decisions on a particular trail.”

Thomas took advantage of attaining his HETAP instructor certification to train all the State Parks naturalists in how to use the $18,000 machines.

“The idea was the naturalists use the trails more than anybody,” he said. “They’re out doing their interpretation programs every day. Now they can assist me in trail assessments.”

After the assessments are done, a TAI (Trail Assessment Information) sign is erected to give the users the pertinent information about the trail.

Other Gems of the State Park Trail System

Thomas said a mountain bike trail at Guntersville was improved and built around the golf course with 3/10ths of a mile of that trail constructed to be completely ADA (Americans with Disabilities Act) compliant.

“It’s the most unique project you will ever find on a trail,” Thomas said. “Rickwood needed work done on lighting. Incandescent lighting promotes growth that normally would not happen in caves.

“Tim said, ‘Isn’t Rickwood Caverns just an underground trail?’ We were able to get another RTP grant to fix the electrical, install LED lighting and do some education work.”

The education aspect concerned people with mobility issues who couldn’t get in and out of the caverns, which has a final staircase of 102 steps to exit the cave.

“We put heads together and came up with an idea with the new 360 (degrees) virtual reality technology. We bought a 360 camera and VR goggles to wear. If you have problems with the goggles, we got a curved-screen 4K television and the best computer we could find to play 4K video. So, if you twist your ankle and your school group goes to Rickwood, we can send you on a virtual tour. If Grandma or Grandpa are not up to the staircase, they can do a virtual tour.

“That project was so unique that we were featured at the Corps Network 2019 National Conference. We’re going to try to shoot 360 videos at all our parks and let people visit all of our state parks from one location. That’s coming.”

At Lake Lurleen State Park, the new McFarland Trail was made possible through a donation from the McFarland family to the Alabama State Parks Foundation.

“We organized trail volunteers,” Thomas said. “The Western Alabama Mountain Biking Association supports Lake Lurleen. That group went in and built a trail, and then 10 State Parks people came in and dressed up the trail, got the signage ready and had a big ribbon-cutting.”

Thomas said the RTP grants were administered by ADECA (Alabama Department of Economic and Community Affairs), which made the grants available through an 80-20 match, which meant State Parks had to provide 20 percent of the funding.

Thomas said, “That’s a deal nobody can refuse.”

David Rainer works for the Alabama Department of Conservation and Natural Resources. 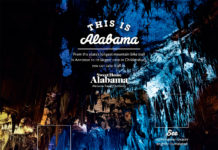