“Like many of my classmates, I thought I would leave Auburn, ” says Hard, who graduated in 2017. “I just didn’t think there was much of a possibility of something here in my career path. But Berghoff came, and it was a natural progression.”

Berghoff announced in 2016 that Auburn would be the site of its first U.S. plant, promising a $30 million investment and 100 jobs over the first five years. “It was a great success to get them, ” says Arndt Siepmann, director of industrial development for the City of Auburn.

That success is borne out not necessarily by numbers — Berghoff has relatively few employees and much less mass output than the auto industry or other big manufacturers — but by quality of work and, consequently, its workforce.

“It is a very high-tech CNC (computer numerical control) machining company with very complex parts, ” Siepmann says. “The high-tech complexity of the parts results in a required skill set that results in a higher pay than other manufacturers. You have to find people who have skill sets to work there, and, at the same time, their pay would be way ahead of other blue-collar salaries.”

“Our customers have very, very high requirements, ” he says. “That also means that we want to work with the best in our workforce. We have high requirements of the people we bring here, so the proximity of the technical schools here, as well as Auburn University, was very appealing to us. We need that proximity for growing our business in the future.”

Another plus? Being able to build a new facility at Auburn Industrial Park West.

“It was a big advantage for us to be able to build a place to our specifications, ” Niggemeier says. “We need some features in this facility that a lot of the other industrial companies maybe don’t need, and it helped us a lot that the City of Auburn, especially, and the Industrial Development Board were very helpful in getting those features in the building and making sure we had that available to us.”

Berghoff’s Auburn plant opened in March 2017, and Niggemeier says the company is still in its launch phase. The company is taking blocks of aluminum, titanium and other materials, and machining parts that will go into other machines that will help create the computers of tomorrow.

“The main production right now is for the semiconductor industry, ” he says. “Our parts end up in the newest generation of computer chip manufacturing machines. The first machines are on the market, and most of the chips have not even made it yet into the computers and cell phones and so on, but they’re coming. These components for these machines are right now our main business, but we’re also machining relatively simple parts for other manufacturers.”

As of April of this year, Berghoff Precision Machining USA employed eight people. Its manufacturing floor features two five-axis CNC machines and one that is much larger, capable of machining a 9-by-8-by-5-foot part. A precision measuring machine is also in the building, and all are hooked up to technology that allows Berghoff employees in Germany to see exactly what is being done in the United States.

A five-year plan projects 50 employees by December and another 100 each of the following two years, at which point a second manufacturing facility would be added.

It’s the five-axis machining that helps separate Berghoff from its competitors. Others have the capability, but they are not necessarily available to companies who need them.

“There are large, five-axis CNC machines and large measurement machines in the region, but to have a facility that has the capacity to measure parts this large and a fully enclosed five-axis CNC system with a pallet changer this large in this region is very, very uncommon, ” Hard says. “That allows us to not only produce but to confirm the quality of some highly complex and very large parts that a lot of our competitors can’t. Some others can do it privately, like for government applications and things like that, but they aren’t ‘for hire, ’ per se.” 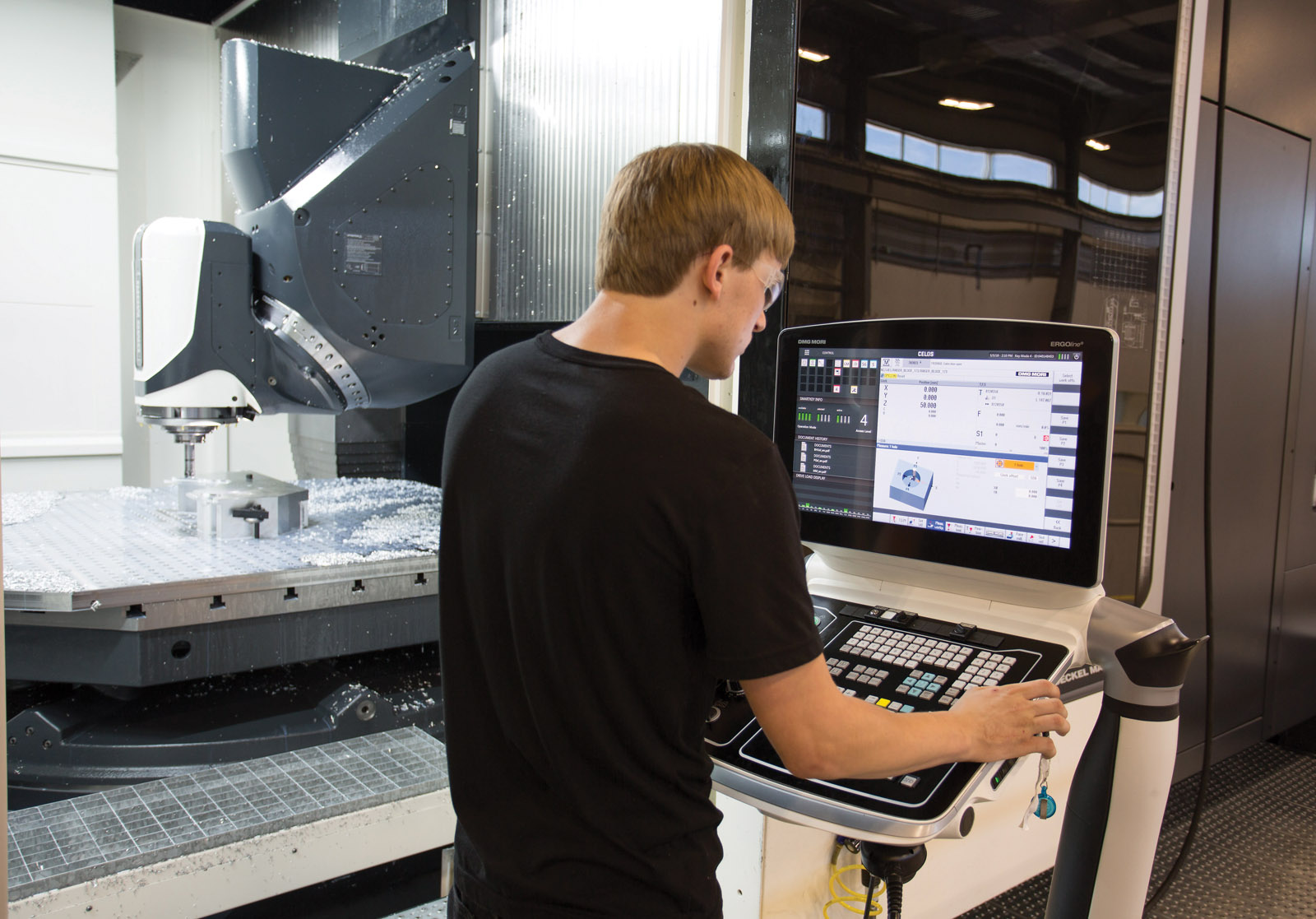 The complexity of the machining also differentiates Berghoff from other more high-capacity Alabama industries.

“Our parts are so complex that it takes sometimes six or seven weeks to finish just one part, ” Niggemeier says. “It’s completely different from high-volume manufacturers. One part may have 130 hours of machining time.”

Berghoff, a 30-year-old family-owned business with 180 employees in Germany and Switzerland, has core customers — in the semiconductor, aerospace and equipment manufacturing industries — that were appealing to Auburn, Siepmann says.

“They are servicing industries that we do not do a great deal with right now, so it’s furthering our diversification goal of having a portfolio of industries that is not so vulnerable to a down-trend in a specific industry, ” he says. “If I have a variety of divergent customers with different products, I’m not so dependent upon any one of them.”

And Berghoff’s bright, modern and squeaky-clean facility “will change people’s idea of what manufacturing is, ” according to Siepmann. “This is a great win for that reason alone. You’re creating great and well paying jobs, but also likeable jobs. People will want to work there.”

Berghoff’s decision to come to Auburn was announced on a worldwide stage at the Hanover Fair in Germany in 2016. President Barack Obama and German Chancellor Angela Merkel attended the fair, and “there was a lot of attention, ” Siepmann says. “That was the right place for them to make the announcement. That gave them a big platform, and it created interest in the company.”

That interest should eventually translate into expansion, and all of that translates into a big win for Auburn, even if it is on a small scale.

“On the employment and economic impact side, it is probably one of the smallest announcements for Auburn so far, ” Siepmann says. “Next door and on the hill is GE Aviation, and in every characteristic, people would argue it’s a bigger deal for Auburn — it’s GE Aviation, 200 jobs, a huge win for Auburn four years ago.

“But I think if you look at it as far as the quality per job, like the quality per square-foot operation, I think they’d at the very least be even, ” Siepmann adds. “Berghoff is a really big deal for Auburn.”

Alec Harvey and Robert Fouts are freelance contributors Business Alabama. Harvey is based in Auburn and Fouts in Montgomery.