Stuart Raburn spent 26 years in IT before 2012, when he sold the last of several companies he had founded. Along the way, he had acquired a piece of land adjacent to the Shelby County Regional Landfill in Columbiana for a venture that didn’t work out.

Not long after Raburn began thinking he might retire, his son, Kyle, then an Auburn University student, saw the documentary “Fresh.” The film profiles small farmers across the country using innovative techniques for sustainable and clean agriculture.

The younger Raburn suggested his parents watch the documentary, and they were impressed and inspired by what they saw.

“We had experienced cancer and other diet-related illnesses in our family and were trying to eat whole, clean foods, avoiding pesticides and other poisons,” Stuart Raburn says. “The idea of creating our own farm sounded like fun.”

The Raburns decided to pursue aquaponics farming — using a combination of aquaculture and hydroponics — on their Columbiana property, kicking off their company Southern Organics in 2014, says the senior Raburn. He serves as chief executive officer. “You can produce so much more per square foot in controlled-environment vs. dirt farming, and it’s easier to farm without pesticides using beneficial bugs,” he says. “Plus it’s a lot cooler working inside a greenhouse than out in the field, and you can grow year round.”

Currently Southern Organics supplies a number of gourmet restaurants in the Birmingham area — including Whistling Table, Root to Tail, Foodbar and Gianmarco’s — as well as select grocery stores. “Although it’s always changing, about half of our business now is restaurant and half retail,” says Kyle Raburn, who started in sales but now primarily handles marketing for the family business.

Those restaurants’ top chefs are provided with specialty microgreens, peppers, edible flowers and various types of oyster mushrooms from around the world. “The chefs gave us a lot of good feedback as we were developing our products and how they were delivered,” the younger Raburn says. “We have added new products they have suggested.”

The Raburn farm sells its Southern Crunch lettuce and various greens mixtures to retailers under the brand Southern Fresh Produce. In the beginning, Southern Organics delivered boxes of preordered produce but now is featured in a number of grocery stores in the Birmingham area, including a growing number of Piggly Wiggly and Organic Harvest locations, says Mary Alex Waite, head of sales. “Currently we’re at Organic Harvest on Highway 31 in Hoover, but we will soon be at the new downtown Organic Harvest, where they are planning to use our greens in their salad bar,” she says.

Southern Organics doesn’t use the word “organic” in its retail brand because its produce is not certified organic. “The USDA’s rules for certified organic for aquaponics are still evolving and so complex that it just gets silly,” Stuart Raburn says. “Our customers know we are pesticide-free and use natural nutrients, and that’s what they care about. We follow the Certified Natural Grown protocols.” 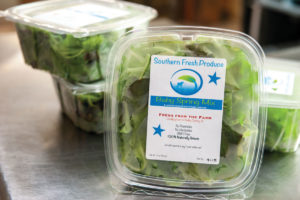 The Raburns started their operation with one commercial greenhouse and an aquaculture facility. Using his IT background, the senior Raburn set up computerized controls and mechanisms for the facility, including light and temperature sensors. The greenhouse uses natural light supplemented by grow lights, which only turn on when needed. With the moderated temperature and light plus hydroponics, Southern Organics is able to turn around crops in 30 days. “During the winter, especially when we experience so much cloud cover, it’s helpful to have supplemental lighting,” he says.

Stuart Raburn credits the work of Dr. James Rakocy, who is called the “father of aquaponics,” for helping guide many of the choices and much of the success of Southern Organics operations. Rakocy, who received his doctorate at Auburn University, spent 30 years at the University of the Virgin Islands perfecting the aquaponics system. “We have learned from many people in building our company, but we couldn’t be doing what we’re doing without Dr. Rakocy’s work,” Raburn says.

Southern Organics’ 10,000-square-foot aquaculture facility hosts tilapia in various stages of development, from pinky size to full grown. Large blue tanks are regulated by a computerized system that also controls the feeding of the fish.

When they reach 2 pounds, the adult tilapia are taken through a gut-cleansing process and are harvested for use by one customer, the Super Oriental Market and its Red Pearl Restaurant in Homewood. “We’re not using aquaculture to make our money selling fish, but we do cull the tilapia at a certain stage so we can keep our fish healthy,” Raburn says. “Their real purpose is to produce waste so that we can naturally fertilize our hydroponic plants.”

The tilapia waste goes through a stringent filtration process to produce nutrient-rich water for the farm’s plants. The solid fish waste is then used to create compost.

New Zealand crayfish, which grow as large as small lobsters and are being cultivated in the farm’s aquaculture facility, are being tested for use in cleaning the operation’s greenhouse nutrient water trays. “We’re always trying to find a better way, and the crayfish, which are considered a delicacy, might become a commercial product as well,” Raburn says. 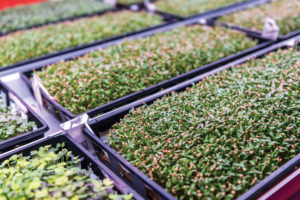 Although the company is doing well now, back in 2015 the Raburns realized there was no way they would ever make money with the small scale of their operation. “I told my wife we have to double down or shut it down,” Raburn says.

Many small aquaculture operations go out of business because they aren’t large enough to cover their costs and make a profit, he says. Most successful ongoing aquaculture is done by the hobbyist using simple materials in his or her garage or backyard. Businesses such as Hydro-Ponics of Birmingham have sprung up to support the hobbyist and small commercial operations. “To do it right commercially, you have to be able to produce a large enough supply, and that takes a significant investment,” Raburn says.

After their soul searching, the Raburns decided to “double down,” adding a second commercial greenhouse for a total capital investment of about $1 million in the farm. Now Southern Organics has 22,000 plant positions in rafts that float in nutrient rich water. “We are now able to produce enough to keep ahead of our operating costs,” Raburn says.

The company employs about 20 workers, including six full-time. It can be challenging to find farm workers, even for an indoor farm, so the company offers flexible scheduling, Raburn says. Plans for the farm include the construction of a series of large hoop greenhouses to house the production of heirloom tomatoes.

Will controlled environment farming eventually beat out the dirt farmer? Raburn doubts that will happen anytime soon. “Commodity crops such as wheat, soybean and corn are best grown on large tracks of land,” he says. “We can’t grow those things economically.”

Kathy Hagood and Joe De Sciose are freelance contributors to Business Alabama.
She is based in Homewood and he in Birmingham. 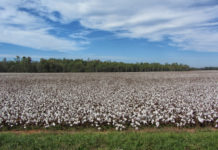 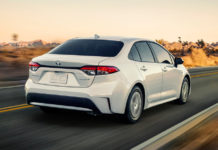 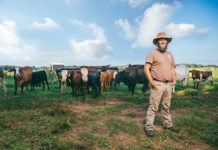