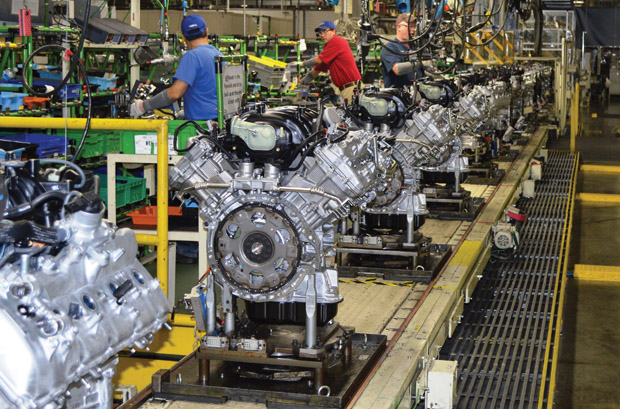 Manufacturing in Alabama is booming. Stats tell the story. On August 10, 2018, a publication in Global Trade ranked Alabama as a national leader for manufacturing, given Alabama’s combination of a skilled workforce, industrial base, investment incentives, and business-friendly tax and regulatory structures. Mercedes, Toyota, Mazda, Honda and Hyundai production facilities pushed Alabama’s ranking to fifth nationally in automobile production, with vehicles being Alabama’s top export. Alabama was also mentioned as a leader in aerospace production, given Mobile’s Airbus production facility. Meanwhile, a study by SmartAsset analyzed data covering 500 cities, ranked the “Talladega-Sylacauga Micropolitan Statistical Area” as the top location in America for manufacturing.

Alabama’s key manufacturing sectors include motor vehicles and parts, chemical products, primary metals, paper products, aerospace and other transportation equipment, food, beverage, tobacco products, fabricated metal products, petroleum and coal products, plastics and rubber products, and wood products. Based on data from the National Association of Manufacturers, those working in Alabama manufacturing comprised more than 270,000 jobs (13% of Alabama’s workforce), with an average annual compensation reaching $64,023.00 by 2015. Further, between 2004 and 2014, Alabama’s exports increased 115%, with the total output from Alabama manufacturing hitting $35.12 billion by 2015 and $19.43 billion in manufactured goods exports by 2016.

No doubt, the manufacturing climate in Alabama is booming and the increase in jobs will likely cause a rise in workers’ compensation claims. As such, and with potentially new employers, insurance providers, and claims professionals handling an increased volume of work injury claims in Alabama, an awareness of the applicable workers’ compensation laws interplaying with the manufacturing sector is fundamental.

The first thing to understand is that the Alabama Workers’ Compensation Act (“the Act”), Alabama Code Title 25, Chapter 5 (Ala. Code §25-5-1, et seq.) is a purely statutory cause of action. Alabama Code 1975, § 25-5-53, provides that an action brought under the Act is the exclusive remedy for an employee’s injuries sustained in the course of his employment. The Act was created as a compromise between employers and employees, liberally designed to favor employees while providing an exclusive remedy to protect employers from employee tort claims such as negligence, which permit compensatory and punitive damages. Accordingly, fault became largely irrelevant under the Act. Second, contested workers’ compensation cases are tried as civil causes of action, in Alabama’s State Circuit Courts, with most issues being decided by an elected judge (not a jury and not by an administrative law judge as in other states). As such, it is critical to understand the law on venue, where a case will be tried, and which judge will ultimately decide the case. The Act was intended to be liberally construed to favor injured employees, where denial of workers’ compensation benefits would be the exception. Knowing this from the start can help keep expectations realistic, help move claims faster, decrease litigation costs, and reduce distractions to production.

Within the manufacturing industry in Alabama, a frequently encountered situation involves the use of staffing agencies which provide critical labor. These arrangements help reduce costs, increase efficiency, and reduce administrative burdens on employers, while also providing skilled labor. It should be kept in mind that these types of “dual employment” arrangements create what have been termed “general employer” and “special employer” situations under Alabama law. With this dual employment paradigm, an injured employee may decide to bring suit against either the staffing company (the “general employer”), the manufacturing company (the “special employer”), or both. The exclusive remedy protections of the Alabama Workers’ Compensation Act were extended to include, and protect, special employers, and this is a key protection that special employers should leverage to preclude tort claims and damages.

If all three conditions are met by both employers, then both employers may be liable for workers’ compensation benefits, but they would, significantly, remain immune from tort liability. As a practical matter, manufacturers should be aware that with any such dual employment arrangement, should a settlement be reached between an injured employee and the general employer, the special employer should make sure that it is included in the terms of any settlement reached. A second practical aspect of handling work injury claims within the context of a “dual employer” scenario is to ensure good communication between the general and special employers when these claims arise, which will assist with the overall investigation (and possible defense) of same.

Another issue that may arise in the context of work injuries with manufacturing jobs, includes the potential defense of willful failure to use or removal of a safety device. Alabama Code § 25-5-51 provides that “no compensation shall be allowed for an injury or death caused by … the willful failure or willful refusal to use safety appliances provided by the employer….” For this defense, “willful” means the employee’s actions were conscious or deliberate. The employer also bears the burden of proving the injury was proximately caused by the employee’s misconduct, and this defense, if successful, only precludes an employee’s right to recover “compensation” (as defined under the Act in §25-5-1 (1) as “the money benefits to be paid on account of injury or death….”). The defense does not relieve the employer or insurance carrier of the obligation to provide reasonably necessary medical treatment with an otherwise compensable work injury.

An additional area that can come into play in the manufacturing industry involves possible tort claims by (or on behalf of) an employee’s child, where the child is injured while in utero. It should be noted that the Supreme Court of Alabama held the exclusivity provisions of the Alabama Workers’ Compensation Act do not preclude personal injury tort claims brought on behalf of a minor (a non-employee), against an employer, where the injury takes place while the child was in utero and during the mother’s employment. Namislo v. Akzo Chems., 620 So. 2d 573 (Ala. 1993).

While not an exhaustive list of legal concerns for employers, insurance providers, or claims professionals in Alabama’s manufacturing sector, a working knowledge of the parameters of the Alabama Workers’ Compensation Act is key. This knowledge can help employers set expectations, issue spot, manage employees, decrease costs and expenses, and improve ways to handle work injuries, all while staying focused on production.

Carl “Trey” K. Dowdey, III, is a senior attorney in Swift Currie’s Birmingham office. While his practice concentrates primarily on workers’ compensation matters, he also defends employers against retaliatory discharge and co-employee liability claims and handles automobile and premises liability defense litigation. He may be reached at trey.dowdey@swiftcurrie.com.