Airbus this week opened its second final assembly line in Mobile, dedicated to production of A220-100 and A220-300 aircraft. Construction of the 270,000-square-foot hangar took 18 months and officially doubles the size of the Airbus facility in Mobile.

The aircraft company had already started producing A220 craft in the next-door FAL built for the bigger A320 production. The A220 is designed for 100 to 150 seats, while the A320 usually has 140 to 170 seats. Both are single-aisle, narrow-body planes.

In a series of five primary assembly stations, workers on the FAL unite components crafted at other Airbus sites, mostly in Europe, to create an aircraft ready for delivery to the customer.

The same day Airbus announced opening of the new FAL, it also announced that components had arrived for the first A220 destined for JetBlue Airways.

“The team is excited to start working in their new facility and to welcome a new customer. It’s a strong endorsement from JetBlue in this challenging time,” said Paul Gaskell, president of A220 USA and head of A220 program in Mobile.

“The expansion of our commercial aircraft production in Mobile to a second product line further solidifies Airbus’ standing as a truly global aircraft manufacturer and confirms that Airbus is an important part of the American manufacturing landscape. This A220 assembly line will help satisfy the U.S. demand for the A220 aircraft.”

The new FAL comes online as aircraft orders have fallen worldwide, in response to dwindling traveler numbers caused by the COVID-19 pandemic.

Although Airbus has been working through a series of worker furloughs and shut the Mobile facility for about three weeks to clean and reconfigure, it anticipates no production rate cut for the A220 craft. 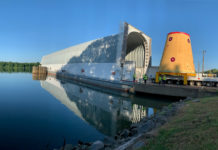 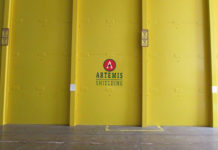 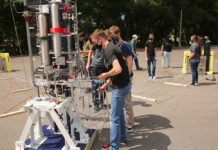