When North Korea fired a missile through Japan’s air space in August, it was a shot across the bow that confirms a nuclear threat to areas like South Korea and Guam.

It’s an escalating threat that might one day be thwarted with missiles manufactured by Alabama workers at the Lockheed Martin Corp. facility in Pike County.

Production there has been steadily increasing, and the Missile Defense Agency recently awarded Lockheed Martin a $273 million Undefinitized Contract Action (UCA) to begin production and delivery of additional interceptors for the Terminal High Altitude Area Defense (THAAD) system — missiles that will be constructed and delivered through March 2020 at the massive facility in Troy.

“With advanced range, agility and accuracy, our interceptors are on the cutting edge of missile defense technology and fully capable of defeating missile threats today and into the future, ” says Dave Anderson, director of Production Operations at Lockheed Martin’s Pike County Operations facility.

The THAAD system uses hit-to-kill technology to neutralize lethal threats before they reach protected assets on the ground.

In July, the THAAD system successfully intercepted a target in a test led by the Missile Defense Agency with support of the U.S. Army. The THAAD system detected, tracked and intercepted a threat-representative intermediate-range ballistic missile (IRBM) target, the first IRBM intercept for the system.

Designed to defend population centers and high-value infrastructure, THAAD has the ability to intercept missiles inside and outside the atmosphere, and it boasts a track record of 100 percent mission success in flight testing. The interceptor missiles, which do not carry explosives, are designed to collide with missiles, destroying them through impact.

Lockheed also was awarded an additional $11 million for spare parts for the THAAD system deployed by the United Arab Emirates, the first international partner to procure the THAAD system with a contract awarded in 2011. Capabilities of these missiles, made with Alabama skilled labor, have drawn significant interest from the Middle East, Asia Pacific and Europe. 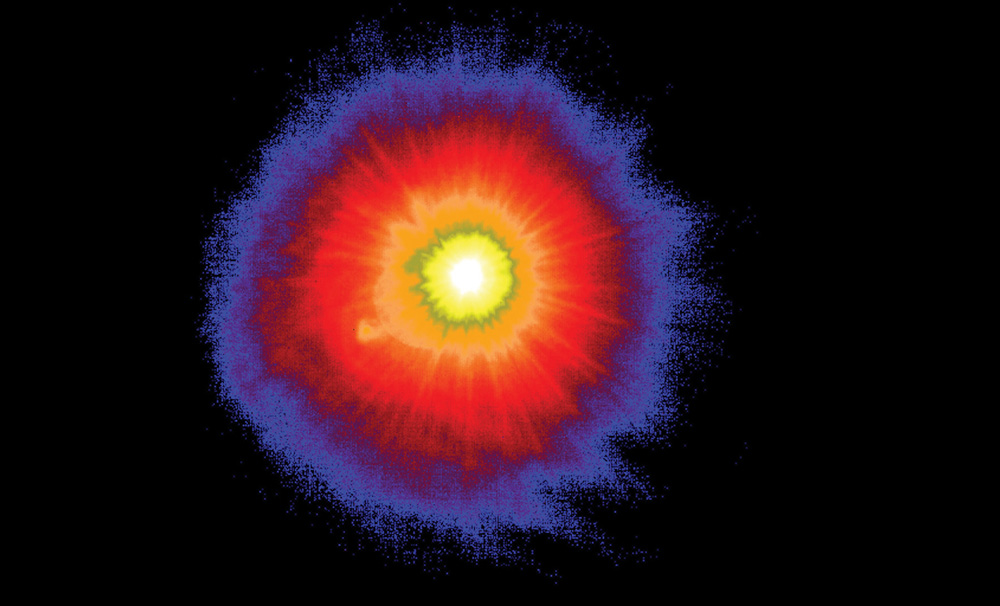 ABOVE Photo of the explosion from a July THAAD intercept of a ballistic missile target over Alaska. THAADs carry no explosives but cause one when successfully knocking out an attack.

As production rates on the facility’s missiles increase, Anderson’s job is to ensure sufficient materials and staff to fulfill the military contracts.

“We try not to get complacent about what we do here, ” Anderson says. Visits from military personnel occur almost weekly. “We do this every day, but there’s a sense of pride in what we do, not only for the company but for our nation. Colonels love to come here and see the products that are being built and what we are doing to support them.”

As the plant undertakes fulfillment of the new contract extending production of THAAD air-to-ground missiles, the Air Force and Navy are closely following the long-range strike systems.

“Our Javelin missile system has four main programs, and three of those programs are ramping up to higher rates, ” Anderson says. “We’ve gone through expansions recently and are growing our employment because of that.”

In addition to more than 400 direct employees, missile production involves a large contingent of contractors with security clearance to work at the plant, representing a healthy infusion to the local economy.

Lockheed’s Troy plant was already on a steady upward employment trend before the latest contract was inked.

“We’ve added 125 to 130 people in the last year and a half, and that growth is going to continue, ” Anderson says. “It’s very positive here. The five-year outlook is the best I’ve ever seen and takes our employment here to around the 540 range. That’s with current contracts.

“There’s a lot more potential for growth, ” Anderson says. “The dynamics of the world have changed dramatically, and needs for these products are growing. I see this being very, very strong for a long time.”

The number of work hours in constructing missiles varies by type, from days to several months from start to finish. It’s Anderson’s job to be sure the project is begun in time to meet the government deadlines.

“Our build process is about 95 percent human-built, ” Anderson says. “Unlike the auto industry, we only do a few things robotically. We have the quality control and detection methods in place to help those people build the product correctly. It’s very hands-on. That’s why the right people are critical.”

The Lockheed plant is ideally situated for strategic hires.

“Several things make this a really attractive location for Lockheed, ” Anderson says. “Number one: Recruitment in the area is phenomenal. We do a lot of recruiting at Auburn University. When people are homegrown and want to live in this area, the attrition rate is very low.” 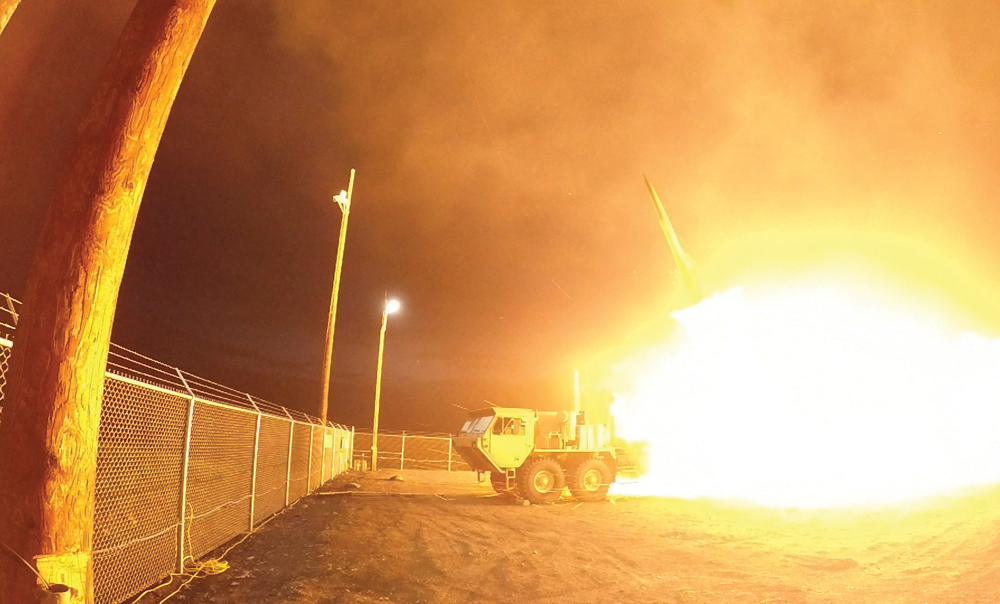 ABOVE The July 30 launch in Alaska of a Troy-made THAAD that successfully intercepted a medium-range ballistic missile target.

Compared to Lockheed sites in other areas, Alabama has been unparalleled in its hospitality, says Anderson, a fact that has not gone unnoticed in the halls of power.

“This is considered at the Pentagon to be a national treasure. This site is talked about every day. A general sat down with me once and drilled that into my head. He was very forceful in helping me understand how important we are to his mission. The products we build here have got to work every time.”

The site has visits from sergeants who have used the Javelins in theater and report the details to the men on the line who construct the missiles. About 30 percent of the work force is retired military or serving in the National Guard.

That vital nature of the work being done has led to an examination of a 10-year plan to further expand the site’s capacity.

“The state and local government outpouring of support really has been attractive in bringing us to this state, ” he explains. “We have room to grow here, and we are going to propose a strategic plan of how many more buildings we can put on the 4, 000 acres we have here.”

A technology center is currently under construction to train employees and set up college level classes, fulfilling a need for advanced training. In this 5, 000-square-foot space in a lower-security area, Lockheed can conduct community outreach and host high school students. With employees driving from 13 counties in the state each day, Lockheed has ensured its spot as a top employer.

The need for THAAD long-range strike systems and air-to-ground missile systems is growing by about 20 percent, Anderson says, and with that, the opportunities for employment in the state.

“We are about 80 percent technical and 20 percent business, ” Anderson says. “With a technical degree — computer science, electrical engineering — there’s a better opportunity to move into one of our engineering jobs. We have employees here working on degrees at night. We try to grow from within — that’s our first priority when we promote.”

“I tell these kids to have a plan for what to do in the future, ” Anderson says. “Nobody is going to pour a bucket of opportunities on you. You have to go find them.”

Anderson, who worked his way up through the ranks at Lockheed, hosted a packed house event at Enterprise High School, with young people staying after the meeting to find out how to get into the business.

“We’re trying to set the stage so they understand what they need to do to get this type of job, ” says Anderson. “It’s a great paying job for this area. Young people have the opportunity I had to work their way up.”

Cara Clark is a freelance contributor to Business Alabama. She is based in Birmingham. 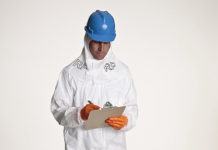 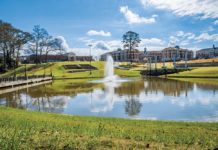 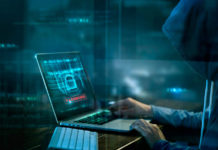