The Alabama State Port Authority has received permission to make improvements at the port to accommodate larger vessel and improve transit efficiency.

The U.S. Army Corps of Engineers approved the general re-evaluation report and supplemental environmental impact statement last Friday. Next step is a design agreement that will allow preconstruction, engineering and design to begin. The port hopes to begin work on the project in 2020.

The improvement project plans include:

APM Terminals, which operates an intermodal container facility at the port, has nearly completed some $500 million worth of improvements there. Its most recent project, due for completion early next year, would allow simultaneous berth of two Post-Panamax vessels.

A portion of state fuel tax proceeds will support about $150 million in bonds for the port’s project, funding made possible by the Rebuild Alabama Act passed by the state legislature last March. 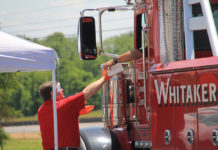 Feeding a Vital Source of the Logistics Pipeline