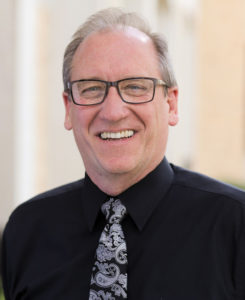 The University of Mobile Board of Trustees has named history professor and executive dean Lonnie Burnett, PhD, as interim president of his alma mater.

Board Chairman David Conner made the announcement following a trustee meeting Friday, May 10. He said the board’s search committee worked with consulting firm JobfitMatters to find the best candidate for the Baptist-affiliated university, and Burnett was the unanimous choice.

“Lonnie Burnett has invested his life in this university, and he is passionate about its mission. He was the best candidate, having the academic credentials and the leadership experience that we were seeking. His selection will allow the university to continue its forward momentum without a transition period,” Conner said.

Conner said the interim appointment is effective May 28 and will continue for a term of 16 months. Currently, former board chairman Fred Wilson is serving temporarily as interim president, after President Tim Smith resigned Feb. 25 for personal reasons.

Burnett said he looks forward to leading a university community that he knows so well, and is excited about the future.

“I am honored to be selected to serve in this role. I look forward to leading such a dedicated faculty and staff in accomplishing our mission as we educate and mentor our students,” Burnett said.

Currently, Burnett serves as professor of history and executive dean of the College of Arts and Sciences. He has held a variety of administrative positions as well, including assistant vice president of academic affairs for planning and evaluation.

He has served as a member of the Saraland City School Board since 2010 and was one of five school board members statewide to be named to the 2017 All-State School Board by the Alabama Association of School Boards. He is an active member of Redemption Church in north Mobile.

Burnett has compiled an impressive scholarly research record. He has published two books with the University of Alabama Press, “Henry Hotze: Confederate Propagandist,” and “The Pen Makes a Good Sword: John Forsyth of the Mobile Register.”

He taught regular and honors U.S. history at the high school and middle school levels in the Mobile County Public School System from 1980 to 2004, serving as chairman of the history departments at Semmes Middle and Satsuma High schools. He taught several years as an adjunct history instructor at UM, retired from the public school system, and focused on his second career as a college professor and author.

He served as visiting assistant professor of history at the University of Southern Mississippi in 2002, where he earned a Ph.D. Burnett came to the university in 2005, eventually becoming chair of the UM Division of Social and Behavioral Sciences and a full professor. He gained tenure in 2012.

He has written numerous articles, book chapters and reviews, and received the university’s Mitford Ray Megginson Research Award in 2006.