Home Gulf Coast Inside the Battle to Build Warships

Inside the cavernous Module Manufacturing Facility at Austal USA, a thick sheet of uncut aluminum enters the production line. Fourteen months later, that same piece of metal will exit the 700,000-square-foot facility as part of a module, or a building block, of one of the world’s most sophisticated military vessels.

From there, the module will be shuttled to an assembly bay down the road by multi-axle transporters, capable of moving modules weighing more than 400 tons. It’s in the assembly bay that these building blocks, lifted into place by crane and welded to an existing framework, will slowly begin to resemble a Littoral Combat Ship (LCS).

The speedy, shallow-water LCS has been a familiar sight on the Mobile River for almost a decade. At the end of 2010, the U.S. Navy awarded Austal a block-buy contract for the construction of 10 LCS Independence-class ships. Over the intervening years, they have ordered an additional nine.

“We’re delivering ships on budget and on schedule,” Perciavalle says. “We’re putting them out fast and furious.”

Of the 19 LCS ships Austal is contracted to construct for the U.S. Navy, nine have been delivered and another six — LCS 20, 22, 24, 26, 28 and 30 — are in various stages of construction. Lockheed Martin is building an almost equal number of LCSs under a different design — Freedom-class — at a shipyard in Wisconsin.

Founded in 1999, Austal USA is a subsidiary of Australian-based Austal Limited. Its shipbuilding facility has become a staple of the Mobile waterfront, occupying 164 acres on the eastern shore of the Mobile River.

With 4,000 employees, Austal is the sixth largest industrial employer in the state, a standing owing, in large part, to the company’s ability to land high-profile contracts with the U.S. Navy. Following the procurement of a contract in 2008 to build 10 Joint High Speed Vessel ships (now known as Expeditionary Fast Transport vessels) and the LCS contract in 2010, Austal was able to make $160 million in capital investments to its facility along the Mobile River, while adding 3,100 employees. 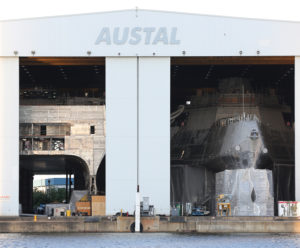 But the LCS program hasn’t been without controversy. When cost increases, schedule delays and concerns about the vessel’s survivability in combat cast a shadow of doubt in the early years of the contract, Perciavalle remained determined to adhere to any changes the Navy deemed necessary.

“As the requirements were maturing with the Navy and, quite frankly, as we were going through the design maturity process, there were a lot of challenges,” Perciavalle says. “We’ve certainly overcome them now.”

U.S. Rep. Bradley Byrne, whose district includes the massive shipbuilder, says he’s proud of the way Austal has coordinated with the Navy on LCS.

“The LCS program has truly been a team effort between the Navy and Austal. As with any new program, there have been challenges, but the Navy and industry have worked together on tackling setbacks and evolving the ship’s capabilities to best serve the Navy’s requirements.”

In 2014, cuts in military expenditures and concerns about the vessel’s combat power put the LCS program in the spotlight. U.S. Defense Secretary Chuck Hagel directed the establishment of the Small Surface Combatant Task Force to review the viability of LCS and to explore possible design modifications.

In 2016, following a spate of LCS breakdowns, two of which were owing to sailor error, the Navy ordered a handful of changes to the vessel, aiming to improve its combat punch. The Navy also set out to reevaluate sailor training.

Designed for speed and flexibility, one of the signature traits of the LCS design was its modularity — the ability to swap out weapons and sensors to suit a particular mission. Critics, citing the sailor error breakdowns, accuse the Navy of wanting the ship to be more versatile than was practical.

The LCS program illustrates several of the challenges associated with fulfilling a contract for the Department of Defense.

“They’re the most demanding customer on the planet, and they should be, quite frankly,” Perciavalle says. “The vessels that we build do pretty important stuff in support of our nation’s defense, and the number one priority is having ships that are very capable to do that and also understanding that we have sailors that are sailing on these ships. So there’s a lot of demand put on us or any defense contractor.”

It’s important to recognize, Perciavalle says, that a client like the U.S. Navy has evolving needs.

“There’s no doubt that, as years go by, the Navy requirements change because the threat could change,” he says. “The beauty about our ships is that we have the adaptability to actually flex the capabilities of the ships and to adapt them to increases or changes in requirements. That’s the beauty of a multi-hull vessel.”

Of course, unexpected modifications required by the Navy can affect cost estimates for government contractors. In 2016, following Navy shock trials on the USS Jackson (LCS-6), Austal entered into a trading halt and issued an earnings announcement warning about an increase in its cost estimate for future hulls “due to design changes required to achieve shock certification and US Naval Vessel Rules.” The modifications required on the USS Jackson and 10 other ships under construction resulted in a full-year loss for fiscal 2016.

Furthermore, in January of this year, Austal confirmed in a release filed through the Australian Stock Exchange that it was “assisting an investigation by ASIC into market announcements by the Company with respect to earnings from its Littoral Combat Ship program.” The investigation is said to be focused on statements Austal issued in 2015 relating to cost increases during the construction of the USS Jackson. In regards to the investigation, Perciavalle says that Austal is “supporting the process.” 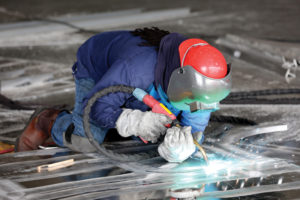 In February 2018, Austal was one of five companies awarded a $15 million contract for conceptual design of the Navy’s new guided-missile frigate. The FFG(X) program, which the Navy is developing as it phases out LCS, seeks the construction of 20 frigates with more lethality. The multi-billion-dollar contract is slated to be awarded in 2020. Austal is proposing a variation of its aluminum Independence-class LCS, leveraging the ability of the multi-hull vessel to accommodate new frigate requirements without drastically changing the existing production process.

“We’ve got a whole team internally here in Mobile that is working on the concept design for frigate,” Perciavalle says. “That collaborative environment has been very, very good. So there’s been a lot of good dialogue making sure we understand the requirements the Navy has and making sure the Navy understands things that can be leveraged in our parent design, so that they can leverage that and help develop a cost-effective solution.”

The impact of winning the 2020 contract, which could guarantee years of production following the conclusion of the LCS program, can hardly be overstated. The Navy is considering awarding the contract to a single builder. The ramifications of not winning the contract would be felt in Mobile and across the state, which is home to almost 400 of Austal’s suppliers.

“To us, it’s a competition,” Perciavalle says, “and you know what, we’ve been in competitions since, certainly, the first day I got here.

“We have the best team in the country here working on these ships,” he continues. “The work ethic, the pride, the ownership in what’s happening has really enabled us to improve performance dramatically over the years and really enabled us to provide a cost-effective solution to the Navy.”

Perciavalle points out four areas of focus when looking at the future of Austal USA. “Expeditionary ships, small surface combatants, unmanned autonomous [vessels] and the service business,” he says. “All of which have plenty of opportunity and all of which we’re in a very good position to excel in.