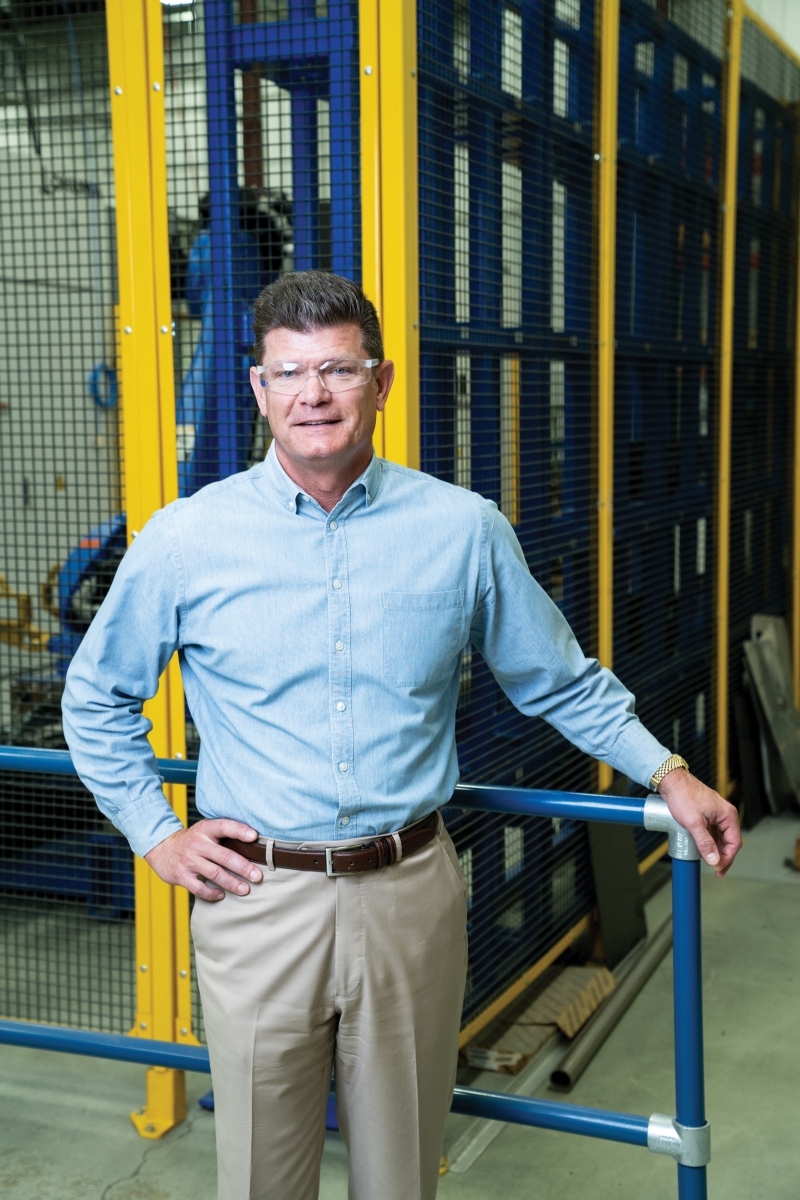 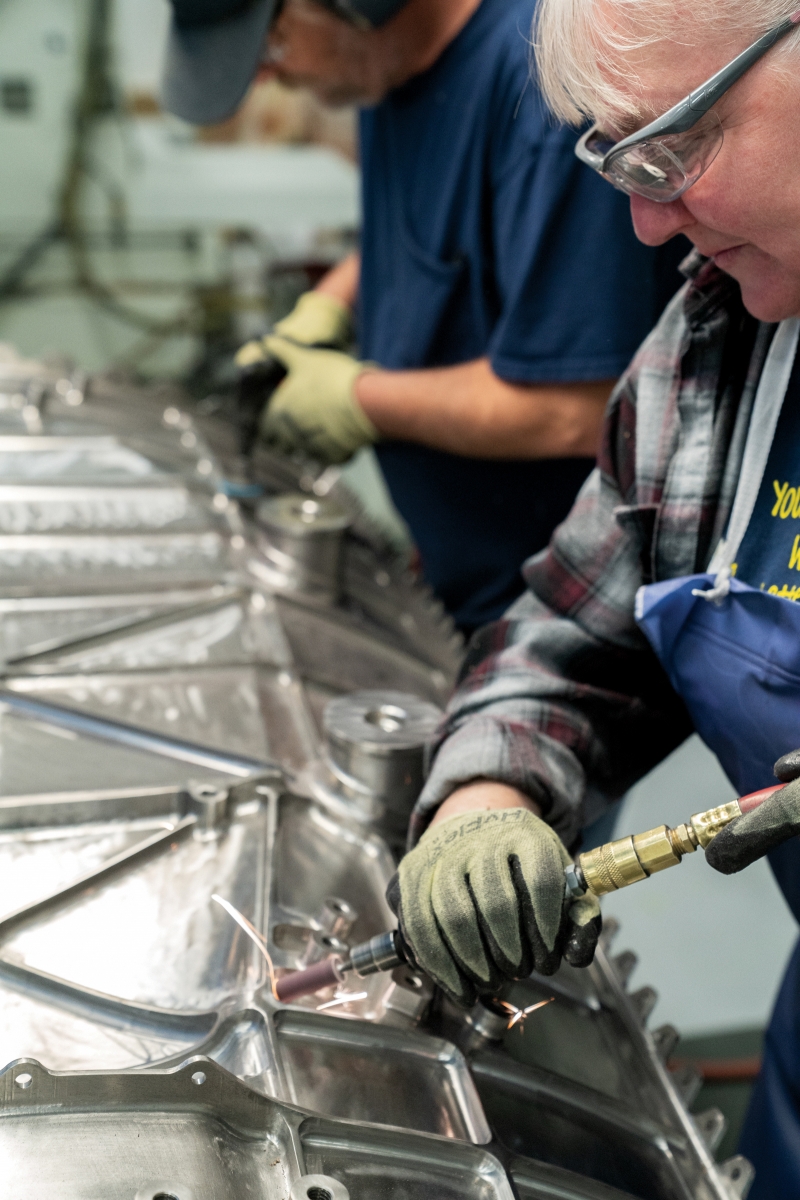 ABOVE LEFT Huntsville’s “little machine shop” has grown into a $50 million-a-year firm working in fields from medical equipment to aerospace, says Greg Brown, who owns the company with his brother Dan.

ABOVE RIGHT Whether you’re crafting an artificial knee or an aircraft window frame, precision counts. That’s the specialty of workers at Brown Precision Manufacturing in Huntsville. The firm now has a second plant in Atmore. Photos by Cary Norton

Brown Precision Manufacturing started out as a “little machine shop” in Huntsville in the 1960s, says Greg Brown, CFO, who co-owns the company with his brother, Dan Brown, president. Their CPA father handled the shop’s financials for years, and when the original owner planned to sell, the employees asked their accountant to purchase the business. The Browns’ father bought the business, then known as Simco Inc., in 1986.

At the time, the business was exclusively a government contractor, supplying spare parts to the Department of Defense. “We were constantly bidding on government jobs, ” Greg Brown says. “Eventually, we got frustrated with government contracting and decided to do commercial work.”

More than 30 years later, the little machine shop now known as Brown Precision Manufacturing has become a leader in multi-axis machining and assembly of complex parts and components in the aerospace, medical and power generation markets. Still based in Huntsville, the company has expanded into South Alabama and continually makes headway into new industries, meeting the needs of manufacturers throughout the Southeast.

Building on a Legacy

Greg and Dan Brown’s parents grew up in Tuscaloosa. “But my dad saw what was going on in Huntsville in the ’60s with the space program, so we made the move there, ” Brown says. Eventually, Greg earned an accounting degree at the University of Alabama, while Dan earned a degree in mechanical engineering and joined the Air Force.

By the early 1990s, when Dan came out of the Air Force, both brothers had joined the family business. That’s when they began pursuing commercial work to diversify from government contracting. The company began outsourcing components for its first commercial clients, such as PPG Aerospace’s Huntsville plant. “They made cockpit windows for things that fly, and a lot of those had some metal components, so they outsourced the non-glass components, ” Brown says. “We got in on the front end of that, and that gave us a steady production model to follow.”

After a few years of strong profits, the Browns sought funding to expand, sharpening the company’s abilities and installing a quality management system, AS9100. Steadily, the company continued to grow. “We just networked and started taking a large account management approach, looking for a handful of big customers to whom we could ingratiate ourselves and become part of their work, engineering what they were designing and getting into production mode, ” Brown says.

After 2001, Brown Precision diversified into medical components, specifically soliciting orthopedic manufacturers. One of their first contracts was with Smith and Nephew, which had just launched a new product, lower extremity bone plates for bone surgery. Since then, the business has branched into reconstructive surgery, knee replacements and other high-precision component manufacturing.

While other firms offer similar services, Brown Precision is unique because of its service and approach. “We manage our addition of large contracts or new customers to a level that allows us to provide the best service possible with program management and customer support, ” Brown says. “Sales is held close by upper management and involves more strategies and not quotas.”

When their father bought the company, its revenue was less than $1 million annually. But the brothers’ focus on steadily meeting the needs of the market has led to impressive growth. This year, Brown Precision will complete $30 million in business and next year, $50 million.

With 150 employees, Brown expects growth to continue at the current rate. 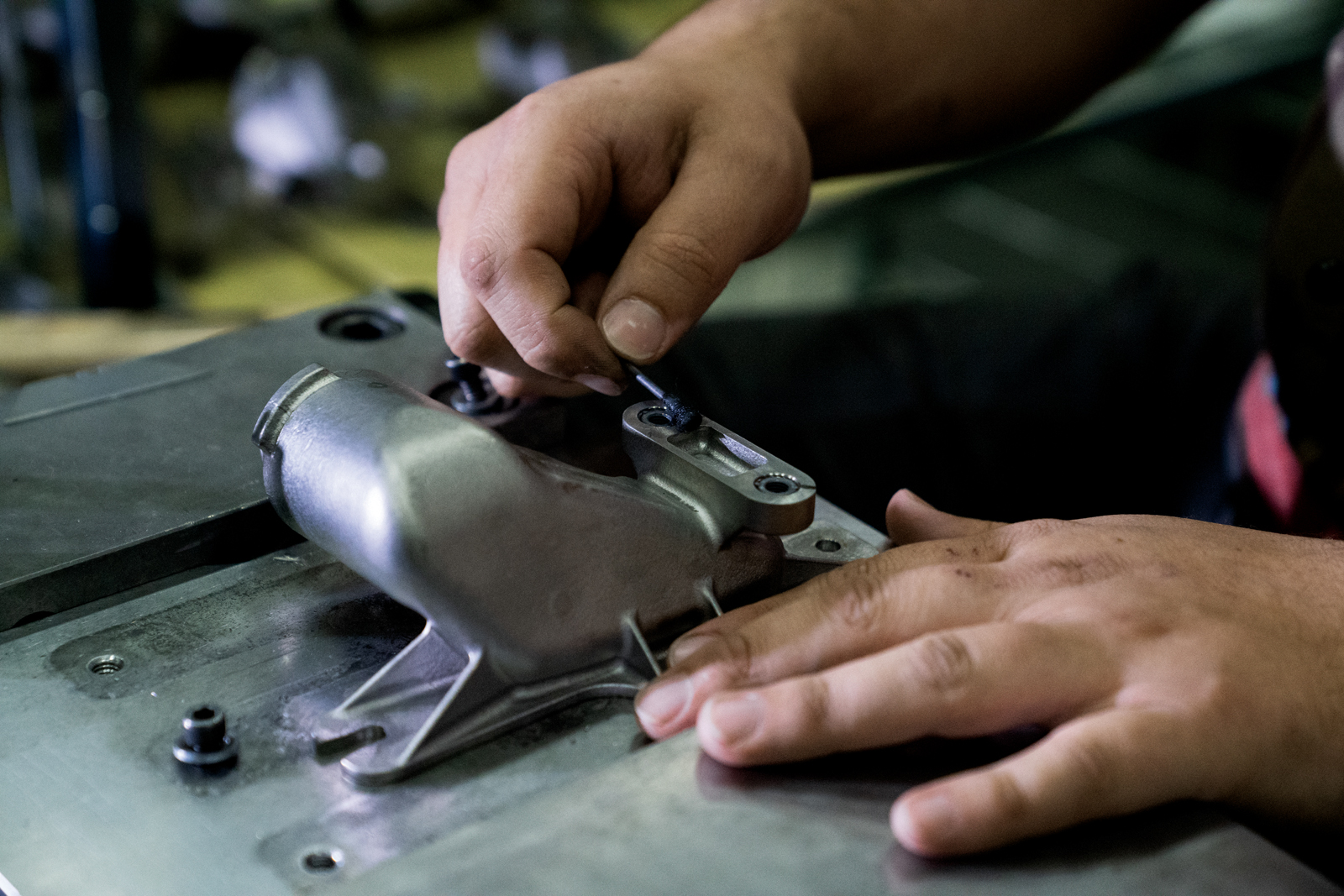 Part of that growth includes a new plant that the Browns recently opened in Atmore. “We needed to expand, and our 50, 000 square feet in Huntsville was full of machines, ” Brown says. “We wanted the expansion not to be on our same campus, for risk mitigation, if there were a catastrophic event. We wanted to be closer to the Gulf and the skilled and semiskilled workforce that’s available in south Alabama. We believe that I-65 in south Alabama [will become] an additional manufacturing corridor for other large aerospace and power generation original equipment manufacturers.”

After considering several locations in the southern part of the state, Brown Precision selected Atmore for its proximity to the Port of Mobile and the local community’s generous incentives. “We liked Atmore because it had the industrial park on I-65, and we were the first tenant, ” Brown says. “They were very keen on Brown Precision and interested in helping us out.”

To construct the new plant, Brown Precision took advantage of federal financing for new market tax credits available for areas with higher than average unemployment. “What we do, skilled manufacturing, was right up their alley, so we qualified easily, and that affords us favorable debt amortization, seven years of low interest and after seven years, a little debt forgiveness, ” Brown says. 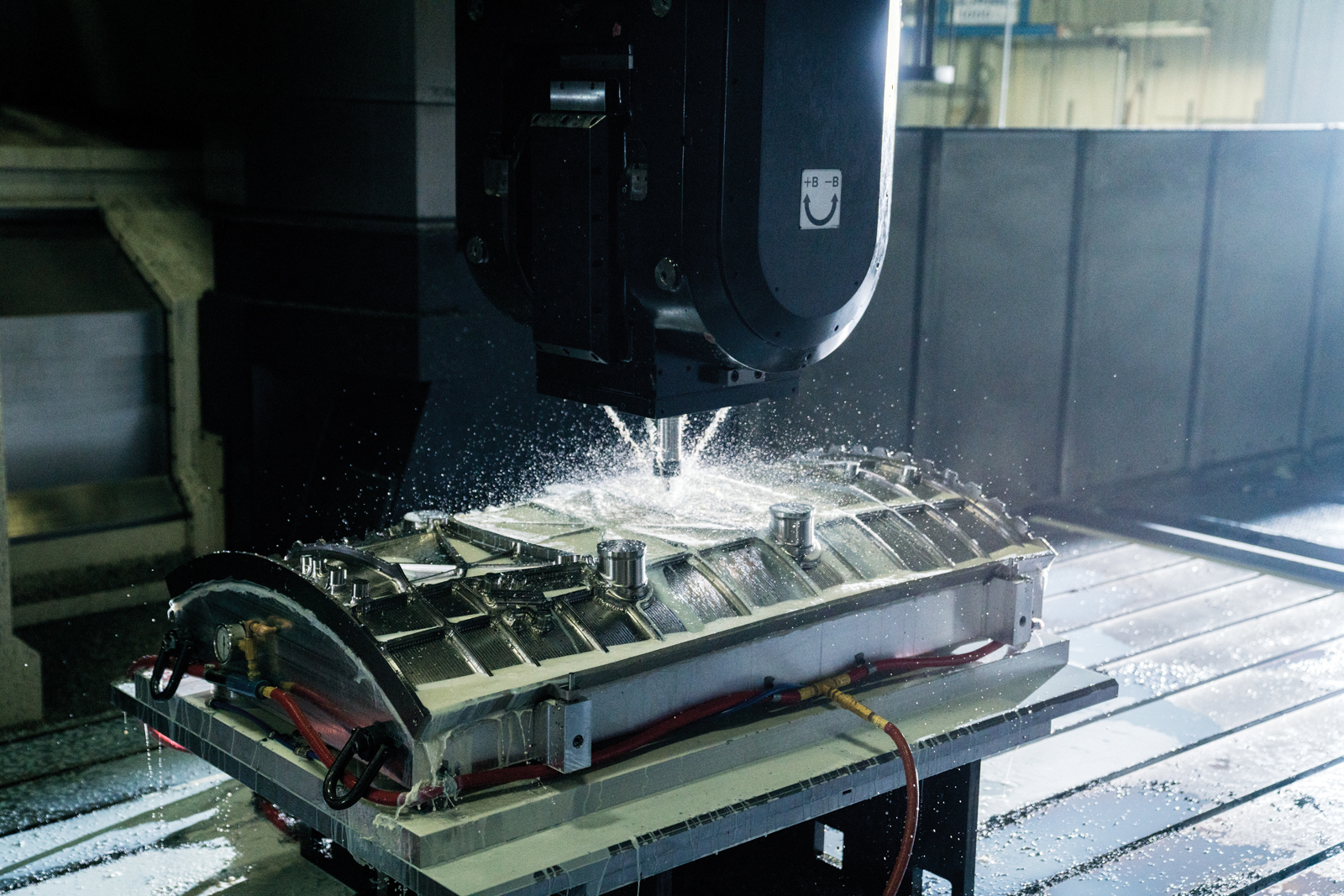 Investing in the Workforce

With plants now operating in both north and south Alabama, Brown Precision is uniquely invested in the need for qualified workers throughout the state. To that end, the company works with both Calhoun Community College in Huntsville and Coastal Alabama Community College in Bay Minette, “hoping to inspire teachers and kids to get into manufacturing, ” Brown says.

Through the Federation of Advanced Manufacturing Education program, Brown Precision partners with Calhoun Community College to give students opportunities to learn, gain experience and earn lucrative wages, says John Holley, dean for technologies at Calhoun Community College in Decatur and Huntsville. “Historically, Brown Precision has hired many of our precision machine students after graduation, ” Holley says. “They expect a student to be prepared and help advise our programs to correct deficiencies and improve student outcomes. Companies like Brown Precision have helped us understand and focus on serving industry and filling the needs and workforce demands of all companies in Alabama.”

In addition to working with colleges, Brown Precision also is involved in high school career tech programs, providing training and increasing career awareness for students, teachers and parents. While Brown Precision has been able to handle its workforce needs so far, its leaders are committed to workforce development, as it’s critical to the future of local communities and the state.

For instance, north Alabama has experienced major economic development, especially in advanced manufacturing, with projects like Aerojet Rocketdyne, Polaris, Blue Origin and the Toyota-Mazda joint venture, Brown says. “We are talking about 10, 000 plus jobs when you include the associated suppliers that will be following these companies, ” he says. “And we believe south Alabama is poised to become the next great aerospace and aviation corridor in our state.”

In response to those developments, Brown Precision aims to promote career awareness and momentum in education in Alabama, so that the state will be able to accommodate the economic development successes and sustain that success over the long haul.

Nancy Jackson and Cary Norton are freelance contributors to Business Alabama. She is based in Huntsville and he in Birmingham.