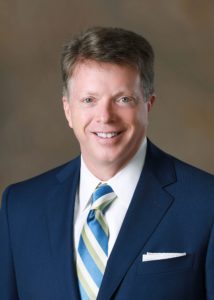 With more than 27 years of commercial banking experience, Womble has an impressive track record in commercial banking. He brings to Merit Bank a unique background of diverse expertise in areas, such as commercial sales management and special asset management. Womble previously served as Madison City president for First Commercial Bank before joining ServisFirst Bank as a senior vice president, where he supported the successful 2006 capital raise for ServisFirst Bank’s expansion into the Huntsville market. He is the founding president and current board member of His Hands Missions International and volunteers with the International Leadership Institute.

“It is a privilege to be a part of such a dedicated team of banking professionals with a proven track record,” says Womble. “I could not be prouder of the work we are doing in positioning Merit Bank to serve our community. We hope to compliment the growth and success of North Alabama’s already thriving economy by filling the void of Huntsville-based banks. Merit Bank gives local business owners direct access to the banking process, while providing clients the highest level of personal service. It’s exciting to see the benefits — not only for us and our clients but our community, as well.”

In addition to Womble, Merit Bank has chosen an experienced team of commercial banking experts to lead the organization.

Frank Aldag is serving as the chief operating officer of Merit Bank. With more than 25 years of experience in the banking industry covering several areas of responsibility and management, Aldag previously served as a senior vice president for ServisFirst Bank and in various leadership roles at SouthTrust Bank, Wachovia and Wells Fargo.

Jeffrey D. Brown is serving as chief financial officer of Merit Bank. With more than 28 years of experience in public accounting and banking, he has worked as an internal auditor, compliance officer, controller and chief financial officer for MidSouth Bank, NA in Dothan and SOUTHBank in Huntsville. In his practice as a public accountant, Brown has specialized in individual, partnership and corporate taxation, retirement planning, fraud prevention and consulting for the banking industry. Brown also serves as a board member and treasurer for the New Hope Children’s Clinic, Madison County Volunteer Lawyers Program and the Alabama Chapter of the ALS Association.

Mark McIntyre is serving as executive vice president of Merit Bank, overseeing the Mortgage Department division, while also developing banking relationships. With more than 21 years of banking experience, McIntyre has previously served as senior vice president of Commercial Banking for National Bank of Commerce and at ServisFirst Bank, participating in the 2006 Huntsville capital raise.

Charles W. (Will) Heaps is serving as executive vice president of Merit Bank, overseeing Commercial Banking and Business Development. Heaps has more than 17 years of banking experience with an extensive record of success in commercial and agricultural lending. He previously served as senior vice president for ServisFirst Bank and in various roles for First Commercial Bank, Bryant Bank and Regions Bank. Heaps currently serves on the Council on Finance and Administration for the North Alabama Conference of the United Methodist Church.

Merit Bank announced their successful $25 million capital campaign and approval from regulatory agencies last month, leading to the opening of their headquarters located at 659 Gallatin Street in downtown Huntsville. A grand opening celebration with ribbon cutting and open house is planned at the bank on Thursday, August 22nd from 4 p.m. to 6 p.m.