Home People Harvest Roots Moves Down from the Mountains

Lindsay Whiteaker and Pete Halupka have grown their locally sourced food business, Harvest Roots, as if following each lesson in a primer on homegrown.

They started in a Falkville farm incubator before moving to a 150-square-foot kitchen in Mentone. As demand for their products increased, so too did their production space. They upped the kitchen to 450 square feet, along the way turning to crowdfunding through Kickstarter and opportunities such as Neighborhood Concepts’ North Alabama Revolving Loan Fund.

Their products are equally organic, as well as effervescent.

Leader among their products is a line of kombucha — that tea concoction from ancient Mongolia now on the shelves of every grocery in America. And, like kombucha, most of their products are fermented — alive with nutrients in microbial abundance. Other fermented foods include kimchi and krauts.

The couple began as farmers but soon shifted their focus to fermentation. They’ve sourced about 75,000 pounds of local produce for vegetable ferments, and they use local fruits in their seasonal kombucha keg series.

The transition to Birmingham will take time and money. Production will occupy a 3,700-square-foot space. Coupled with an on-site taproom, Harvest Roots will occupy 5,000 square feet in the city’s East Avondale neighborhood, adjacent to the restaurant Tropicaleo.

“We were able to find partners that both see the mission and vision behind what we’re doing, but also understand the financial potential there, as well,” Whiteaker says.

Mentone served as an incubator of sorts for the young couple. They were able to grow Harvest Roots one bottle at a time, from a kitchen tucked into Little River Hardware. The community support was unmistakable. Friends would text to alert the couple of an excess of pears, prime for picking, or offer repair know-how when the business’ walk-in cooler went out. 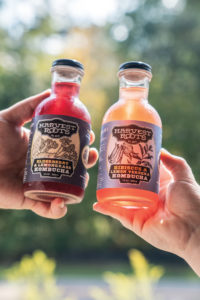 But the location’s limitations were impossible to ignore. Until October of this year, Halupka personally distributed all of Harvest Roots’ products. He racked up miles pinging between north Alabama, middle Tennessee, eastern Tennessee and central Alabama. Demand at 50-plus retail locations often exceeded the amount he and Whiteaker were able to create.

Now that the company has inked a deal with Pinnacle Imports, its products will show up on shelves throughout Alabama.

Birmingham is a more central location from which to distribute, and already the city is the source of 85 percent of Harvest Roots’ sales. Turning over distribution will allow Halupka and Whiteaker more time to focus on production, and moving into a larger facility also will allow them to grow the business and their staff.

Whiteaker and Halupka want to be certified as a B Corporation (B for “benefit”), a company certified for meeting certain social and environmental goals. They find inspiration in businesses like Patagonia and Alabama Chanin and hope to build a workplace that supports employees personally and financially while investing in the community.

The couple has long considered Birmingham their urban home. Whiteaker attended college there, and Halupka grew up skateboarding and playing soccer in the city. They have family in the area, and they look forward to living among the community they’ve found through six years of selling at The Market at Pepper Place. 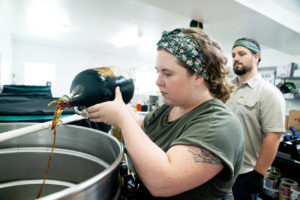 Halupka and Whiteaker are serious about fermentation, but they also hope to inject the fun, often silly, side of their personalities into their taproom.

“We’re bringing to our practice of fermentation a level of craft and seriousness through our sourcing and knowledge of science. But we also love to have fun, and we want our space to be a balance,” Whiteaker says.

Workshops and other events will take place in the taproom. Halupka and Whiteaker hope the business will be an extension of their home, where people can gather for both conversation and education.

The retail space will include 15 taps from which Harvest Roots will serve kombucha, kegged kombucha mocktails and seltzer. They hope to explore alcoholic kombucha in the future. Over time, the business may offer other artisan food products, such as high-quality olive oil, sea salt and home fermentation tools. Guests will be able to order from a menu of snack-sized fermented goods, such as kimchi toasts, and meal-appropriate dishes, including grain bowls.

They’re toying with the idea of an interior mural that would read “Welcome to our home.” The sentiment runs deep, Halupka says.

Whiteaker says the taproom will allow them to dabble in projects that weren’t feasible without a retail model, such as small batch Southern pea miso. The space will allow them to sell directly to customers. When demand is appropriate, Harvest Roots may then make a product more widely available.

But the taproom won’t only be about experimenting with pet projects.

Halupka says, “The idea of the taproom that Lindz and I have is that it’s going to be, more or less, an Alabama natural history museum—”

The two recognize food’s innate connection to ecology and want to ensure that their customers do, too. Soil and climate contribute to food, and tell the story of a place.

“We feel a responsibility and also a pride in communicating what this place means to us,” Halupka says.

As a result, they hope the taproom, which will open in the first half of 2020, will be a source of community and education about Alabama’s ecological riches.

Whiteaker says, “We’re inspired by a lot of people who choose to explore home and sink their roots into that and the beauty that can come from choosing to stay in a place that you’re from.”

Carla Jean Whitley and Cary Norton are freelance contributors to Business Alabama. Both are based in Birmingham.