While Airbus is projected to have a $409 million annual impact on the state’s economy, residual impact of Airbus suppliers has yet to be measured. According to Alabama commerce officials, it’s sure to be great.

“Airbus is just beginning to launch its assembly operation in Mobile, so it’s still early in the game as far as how the supply chain for its Alabama manufacturing facility develops, ” says Greg Canfield, secretary of the Alabama Department of Commerce. “We have worked diligently with our allies in Mobile and around the state to position Alabama as the ideal spot for Airbus suppliers and service providers. We’ll continue targeting the Airbus supply chain, and we’re confident that the strategy will pay off.”

While there are no hard dollar amounts to attest to the growth, a recent economic report completed for the Alabama Department of Commerce estimates the multipliers for the state to be 2.1, 2.8 and 4.7 for output, earnings and employment.

“On the supplier side, we expect the growth and the impact to be gradual and organic, ” says Troy Weyman, vice president of the Mobile Area Chamber of Commerce specializing in economic development. “The beauty of that is we have time to prepare our infrastructure so, as more and more companies decide they can better support Airbus from the same location, we can accommodate that growth. It’s all going to be positive for (the state), ” he adds.

At the Paris Air Show this June, several companies announced plans to open facilities in Mobile to better serve the expanding Airbus Alabama facility and to take advantage of Alabama’s position as a leader in the aerospace industry.

Hutchinson Corp. announced it would expand its operations in North America by establishing an Aerospace Manufacturing Center of Excellence at Mobile Aeroplex at Brookley.

“Hutchinson has been looking at Mobile to expand our North American footprint for several years, ” says Grant Hintze, CEO of Hutchinson Antivibration & Noise Reduction Systems, based in Burbank, California, a division of Paris-based Hutchinson Aerospace & Industry.

“Airbus deciding to locate its manufacturing facility here is certainly a positive, but it wasn’t the driving factor for our company. The business friendly environment in the state, the training opportunities provided by AIDT and the value-based solutions when it comes to qualified labor were other driving factors.”

Hutchinson is an FAA-certified repair and service center focusing on final delivery of thermal acoustic systems for the industry.

Initially, Hutchinson will not serve Airbus from its facility in Mobile.

The company currently provides thermal acoustic insulation for several Airbus model planes, but those parts will be shipped to Mobile pre-stuffed from its facility in Hamburg, Germany, says Hintze.

In addition to its Manufacturing Center of Excellence, Hutchinson will set up a “last minute shop” to assist Airbus with any last minute adjustments, repairs or support, Hintze says.

The company will use its new location on the Gulf Coast to better serve existing clients, including Boeing, Bombardier, Gulf Stream and others, Hintze says.

“Over time, there are several aerospace companies in the region, and at the Brookley Aeroplex that we predict we will form some kind of synergy with them, ” Hintze says. “A few of them we’ve already identified as beneficial partners.”

Hutchinson is in the initial planning stages of a multimillion-dollar build-out of the leased space at Brookley, Hintze says. The company expects to hire 10 employees right away and build the company to 50 or 60 employees by the end of 2016.

“As a company, Hutchinson operates very lean. Going forward, we expect to reach capacity between 100 and 150 people, ” Hintze says.

Hutchinson’s Burbank Facility, where Hintze is located, does approximately $75 million in revenue, with a workforce of 160 people. 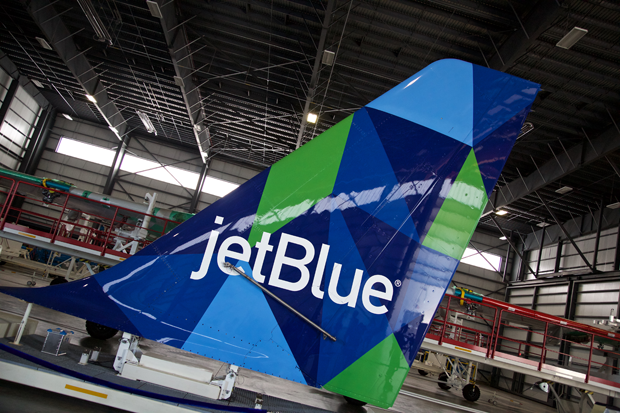 ABOVE JetBlue has already signed on to purchase the first aircraft to be produced in Mobile.

MAAS Aviation also announced at the Paris Air Show that the company plans to construct an additional $39 million twin-bay paint facility at Brookley. This announcement comes in addition to the Irish company’s 2014 announcement about its paint facility to be constructed as part of Airbus’ Alabama location.

“We see this investment as providing significant added value to all parties currently located at Brookley from which customers will benefit.”

MAAS recently completed construction of the first of two paint shops in the Airbus facility and plans to begin construction on the twin-bay facility later this year.

The announcements continued at the Air Show when Messier-Bugatti-Dowty (MBD), a provider of aircraft landing and braking systems, says it would open an office and workshop at Brookley. MBD is a member of the France-based Safran family of companies. Safran Engineering Services already has a presence at Brookley, being the first company to arrive back in 2013.

At the time of the announcement, MBD CEO Vincent Mascre said, “This decision reflects our commitment to support customers locally and expand our relationship with Airbus.”

Even more recently, in July, REEL USA Corp. and AAA Aerospace USA Inc. announced they would lease space at Mobile Aeroplex at Brookley, as well.

REEL services the jigs and tools that will be used in the Airbus facility and plans to employ 20 people over the project’s three phases. REEL will initially lease 4, 500-square-feet of space, with an option to expand as needed.

While Hutchinson predicts nearly 100 jobs will be added as a result of its new facility, the job creation numbers for many of these new supplier companies will be small initially. Weyman says most of the jobs will require a highly trained workforce and also predicts slow and steady growth.

“Here in Alabama, we’re used to the automotive industry, ” says Weyman. “The economies of scale are completely different. We predict clusters to continue to grow and expand to better serve not only Airbus but the aerospace industry in Alabama and along the Gulf Coast.”

When Mercedes-Benz built its manufacturing plant in 1993, it was a lone outpost of the automotive industry. But over the years, Alabama has built a robust network of OEM plants and dozens upon dozens of suppliers all over the state.

“We believe the same will hold true for Airbus, ” Canfield says.

“Airbus’ $600 million assembly line will be a powerful catalyst for growth, creating 1, 000 direct jobs by 2018 and many others as suppliers and service providers set up operations nearby, ” Canfield says. “The Airbus operation adds a major new dimension to Alabama’s aerospace sector. Aircraft assembly represents a new capability for the state’s aerospace industry, which is already involved in activities such as component manufacturing, research and design, advanced materials, training and rocket and missile production.”

Airbus recently released a Global Market Forecast calculating that the U.S. and Canada would require 5, 901 new passenger aircraft of more than 100 seats between today and 2030. U.S. air traffic is and will continue to be the largest single air traffic flow region on the planet, the report says.

While Airbus is a big reason these companies want to be here, Weyman also thinks the region and the Gulf Coast corridor offer additional opportunities for business.

He points to MAAS Aviation as the perfect example of the clustering effect he mentioned.

“That’s exactly what we want to see, ” Weyman says. “We want to grow that concentration of companies who want to continue to make bigger and bigger investments here.”

“The long-range impact of the Airbus operation on Mobile and Alabama will be massive, ” adds Canfield. “Mobile enjoys an elite status as one of only three locations in the U.S. where large passenger jets are assembled, and that positions it for additional investment and new jobs.”

Alysha Schertz and Dan Anderson are freelance contributors to Business Alabama. Both are based in Mobile.